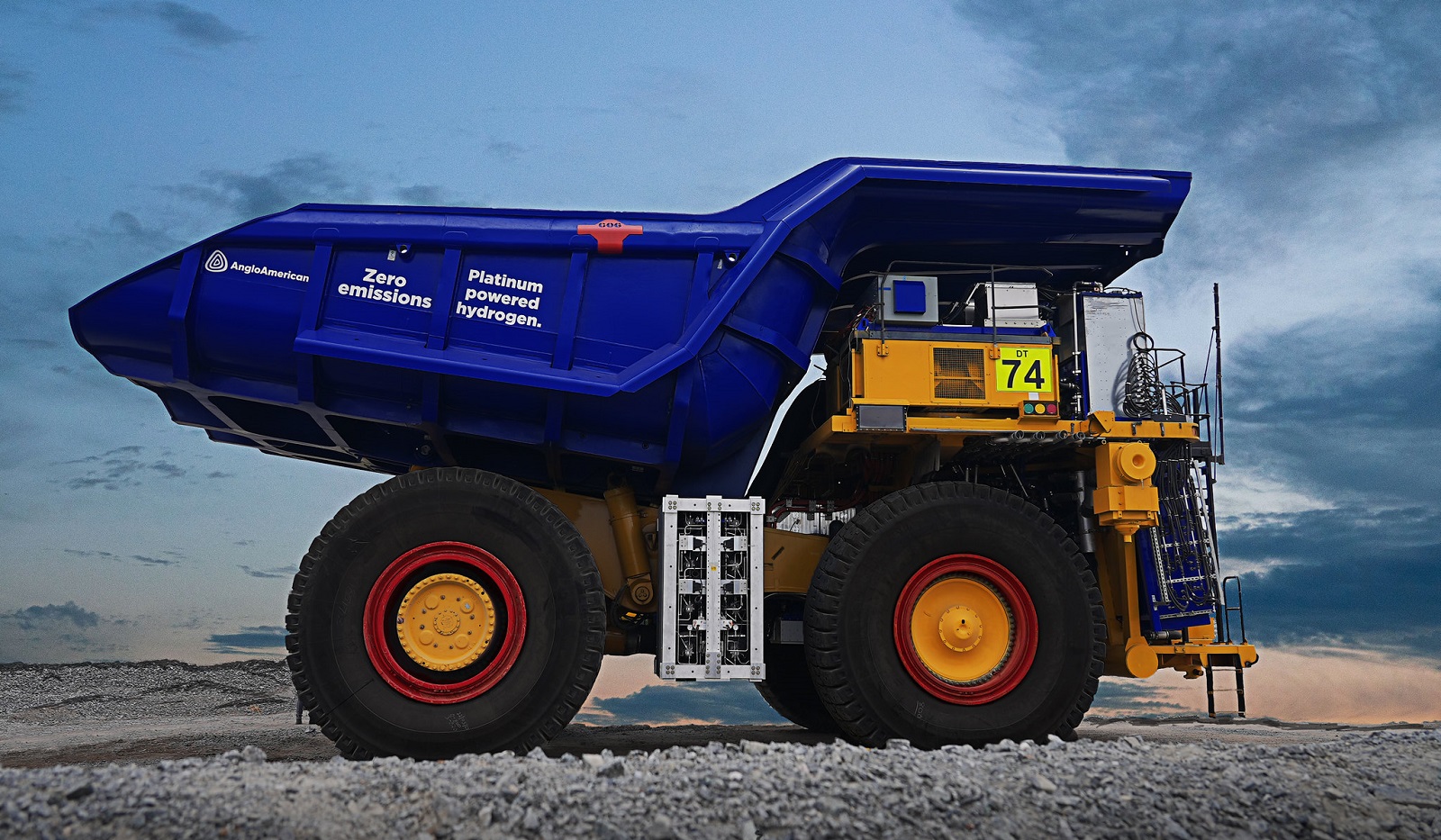 Anglo American could replace more than three-quarters of the large diesel mine haul trucks it is currently operating worldwide this decade with hydrogen-powered versions after officially launching a prototype 2MW hydrogen-battery hybrid vehicle in South Africa.

Former CEO Mark Cutifani said in February this year the company had plans to roll out about 315 hydrogen-powered trucks at its platinum group metal, copper, iron ore and diamond mines, starting in 2024 at the world’s largest openpit platinum mine in Limpopo Province in north eastern South Africa.

The circa-40-truck rollout planned for Mogalakwena would be followed by an initial 80-90 trucks at copper mines in South America starting in 2025. Nearly 200 hydrogen trucks are earmarked for iron ore and diamond mines in Anglo’s portfolio.

A spokesperson for the company told InvestMETS Anglo currently ran 350-400 large diesel haul trucks worldwide. It was “hard to put a unit cost on hydrogen replacements and/or conversions as we’ve only built one so far, but we ultimately expect the economics to tally with the current diesel versions, while also benefitting from far fewer maintenance hours, lower use of lubricants, greater reliability, and of course zero emissions”.

Cutifani said in February the company’s “zero emission haulage solution” developed with partners in South Africa would cut scope 1 and 2 emissions by 50-70% versus diesel trucks.

Anglo said at its nuGen Zero Emission Haulage Solution (ZEHS) launch at Mogalakwena the 290-tonne-payload truck was part of a “fully integrated green hydrogen system, consisting of production, fuelling and haulage system, with green hydrogen to be produced at the mine site”. The site has a 3.5MW electrolyser powered by a local solar plant.

New Anglo CEO Duncan Wanblad said with diesel haul truck emissions accounting for 10-15% of the company’s scope 1 emissions, “this is an important step on our pathway to carbon neutral operations by 2040”.

“If this pilot is successful, we could remove up to 80% of diesel emissions at our open pit mines by rolling this technology across our global fleet,” Wanblad said.

Natascha Viljoen, CEO of Anglo American Platinum, said: “We are particularly excited about the potential of nuGen amongst other opportunities, as we work to champion the development of South Africa’s Hydrogen Valley.”

South Africa’s national Department of Science and Innovation and the South African National Development Institute are working with Anglo American, Bambili Energy and ENGIE to assess opportunities to create a “Hydrogen Valley” over about 835km between the PGM-rich Bushveld geological area in Limpopo province, along an industrial and commercial corridor to Johannesburg and to the south coast at Durban.

The nuGen Zero Emission Haulage Solution is one of the plan’s first projects.

“We are delighted to partner with Anglo American to provide renewable hydrogen for their proof of concept. Through this partnership, we aim to unlock the potential of green hydrogen in South Africa and pave the way for the decarbonisation of the mining industry,” he said.

Anglo American has worked with engineering and technology companies including ENGIE, First Mode, Ballard and NPROXX to design, build and test hardware and software for the prototype truck and infrastructure.

“We believe the emerging hydrogen sector has the potential to dramatically improve the growth and development of many economies by creating new industrial value chains and economic generation opportunities,” said Wanblad.