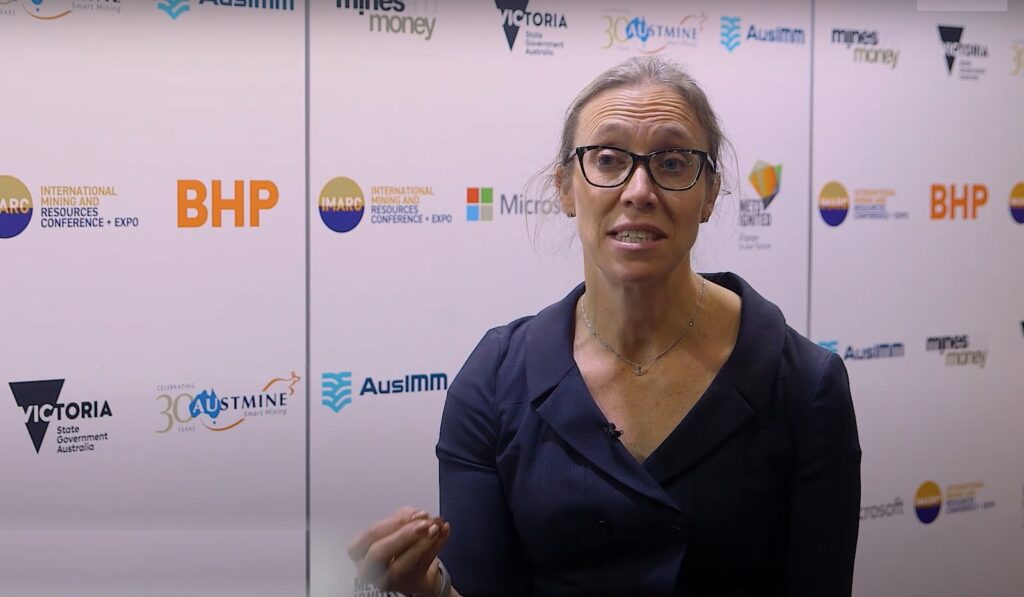 Michelle Ash says her decision to step back into a mining company leadership role was “definitely one of the hardest decisions of my professional career” after guiding French software heavyweight Dassault Systemes’ reset of its mining-focused GEOVIA business over the past two-and-a-half years.

Ash, 48, will join mid-tier copper miner OZ Minerals in March as the company’s technology executive, overseeing execution of its information and communications technology strategy. She previously headed Barrick Gold’s innovation group and has been on the boards of a number of small companies and industry groups in a circa-30-year career in mining.

GEOVIA will continue to ramp up marketing of new mining simulation and planning tools, and ESG products and services, but there is no doubt Ash has been integral to Dassault’s efforts to reposition itself in the market it entered via its US$360 million acquisition of Canada’s Gemcom nearly a decade ago. The GEOVIA brand is coming up on its 10-year anniversary.

Ash says the traditional general mine planning software market has probably contracted since the start-up – impacted by the protracted industry downturn that ran through to 2016-2017 and by displacement of so-called point solutions by integrated operations and business management products.

A new, powerful wave of spending by the industry is focused on these products and also on advanced simulation, visualisation and optimisation, and ESG-compliance, tools.

“GEOVIA’s brand promise was historically around modelling the planet; geoscience, or what we call earth engineering, being a specific application of that,” Ash told InvestMETS.

“That’s been lifted and shifted to construction and other markets.

“But what we did last year was to upgrade that brand promise to be about modelling the sustainable planet, which represented a significant pivot in terms of really now doubling down on sustainability and working with clients on some of their biggest sustainability challenges.

“The other major change, started about three years ago, was a shift to leveraging Dassault’s 3DExperience platform to allow us to both modernise the mining products but also to connect the range of capabilities the group is renowned for – in automotive manufacturing and aerospace, for example – with the mining capabilities to try to fast-track the change in mining.

“We call some of the integrations we’ve completed so far industry process experiences. We are basically talking about an optimised industry process – a mining process, for example – with an experiential element to it that allows people to interact with the process.

“That’s been quite a pivotal change for GEOVIA.

“The outlook for the business is very strong this year. Our plans are to grow at 20%.”

Dassault and OZ Minerals are both supporters of the Electric Mine Consortium, a group based in Australia seeking to fast-track the industry’s transition from diesel-vehicle reliance to battery-power and electrification. It has the backing of a number of other large mining and supply companies.

Ash has long been an advocate for better collaboration between miners and METS companies. Now the common ground either side of the fence appears to be considerable, particularly around ESG issues.

“I think one of the biggest challenges we’ve had in mining has been how we genuinely partner with technology businesses to solve problems in our industry … and how we partner with each other to drive that as well,” she said.

“What is different about OZ, evident in some of the challenges [such as exploration and waste reduction] they’ve been putting out there recently and the way they operate within the Electric Mine Consortium, is that they really understand that they have to partner with a range of technology vendors and actually work with them to bring together integrated solutions.

“They are trying to bring multiple vendors together to work collaboratively and to work with multiple mining companies to define problems they’re trying to solve, what the solutions look like, and then focus on how collaboration can work to achieve results and achieve integration.

“I think that is where OZ are different to some of the other mining companies.

“On both the mining side and the technology vendor side we have pieces of puzzles and we’ve implemented some of the pieces. But a lot of it is still sitting isolated, or as a proof of concept, and the cohesion in putting it all together is still a bit elusive.

“I think the challenge on the [supplier] side is, we can’t be all things to all people. It’s challenging from a technology perspective to, first of all, have all of the different pieces and then to keep them all current and state-of-the-art. As a market, mining can be influential but it is not a massive industry. The entire mining industry’s market capitalisation is, give or take, about $2 trillion … depending on what the value of some of the privately held mining companies is.

“Somehow we’ve got to come to grips with what a partnership model – between technology suppliers – looks like.

“And then on the other side of the fence, mining companies need to be thoughtful of the fact that IP ownership is challenging. Owning the IP isn’t necessarily going to be helpful for them, but efficient commercialisation of the IP, and implementation in their mines, is exactly what they want.

“They certainly have a good chunk of know-how, and may even make a contribution to the IP, but they really need others to drive and commercialise that and therefore they also want others to be [consumers of the IP].

“Technology businesses often have to work across different industries and I think that is something that OZ accepts and is happy to promote.”

Ash thinks the level of acceptance in mining of the role digital, robotics and other technologies can play in helping to transform the industry – in the eyes of communities and people looking for careers, as well as investors – is at a point where the pace of technological change should increase over the next decade.

“There are also more problems, or problem classes, that we now realise are going to be transformed or solvable by some of these technologies,” she said.

These “problem classes” include orebody knowledge, automation and electrification of operations, value-chain optimisation, precision extraction and even sustainability of the industry in its present form.

“I think that equation might already be changing around the world in terms of community governments having an expectation that the value they derive from their natural resources will be greater than it has been historically.

“That might come in two forms. One, making mining companies more efficient, therefore more profitable and generating more [wealth] to share. Secondly, changing the business models and some of those social contracts that we’ve had.

“As we automate, for example, there will fewer base-level jobs, so how do we not only increase skill and education levels but also add value to communities in other ways? It might be the Norwegian sovereign wealth fund-type model, for example. Or some other type of model.

“I don’t think we should expect things to stay the way they are today.”

For more insights from Michelle Ash and other industry leaders, order a copy of InvestMETS Leaders 2022.