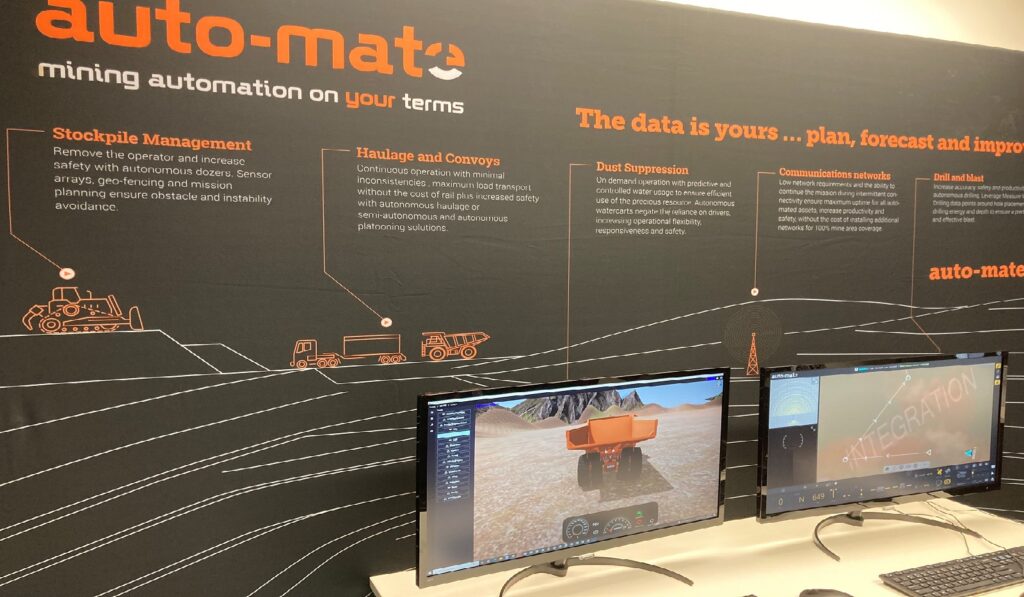 Shortages of people to perform vital mine operating roles will be a key talking point at this year’s Diggers & Dealers conference at Kalgoorlie, providing an apt stage for promoters of mature vehicle automation technologies. Damien Williams is expecting a hectic few days.

The solutions & implementations manager with Perth-based Auto-mate says the company will provide visitors with a unique opportunity to apply level 4 asset automation at their site via a customised simulator.

“The current technologies are focusing on setting a plan and compliance to that plan,” Williams says.

“It is set, it is repeatable and it is highly efficient for those operations with a low rate of change in their production plans. Without compromising on safety, Auto-mate is looking to provide operational flexibility and lower burdens of maintainability for the same autonomous increase in utilisation.

“In terms of an increased requirement for remote work and smaller, less contiguous orebodies, miners are going to need technology that can perform the heavy lifting when people are at arm’s length as well as be flexible to meet dynamic operations. A rock factory can afford to send a survey team out every time there is a new road but smaller mines with multiple pits and orebodies can’t.

“The technology has to keep pace with the increased challenges our miners face today.”

Level 4 autonomous vehicles can “respond” to deviations in operational settings without the need for manual intervention. They represent a step below full level 5 autonomy. Auto-mate’s route path planning (RPP) technology, developed and demonstrated in Israel, will be on show at Diggers.

“With our simulator we can show how the RPP and level 4 automation works,” Williams says.

“We can set up different operational scenarios with customer site settings and inputs – simulate the mine and then have our actual automation control software interacting with the mine conditions. The same version of the software that we load onto an autonomous truck is what is being simulated in the virtual mine.”

Auto-mate, a 50-50 joint venture between Israel Aerospace Industries and Australian mine logistics leader Bis Industries, has been putting its advanced vehicle automation technology through its paces at a quarry in Israel. It has been building its Perth operational and support team over the past 12 months.

CEO Daniel Poller says the global market appetite for mining equipment automation has continued to grow and is arguably stronger in Western Australia than any other part of the world.

“When we talk to miners they are looking at this with a lot of excitement,” he says.

“They look at the current technology, and they know the issues. They know the problem with trucks stopping every time there is a bit of a spillage. They know about the time it takes to do the route planning and to put the way points in. It can become a big barrier for automation.

“So when they look at something that is simple to operate, creates a lot more flexibility and a lot less stoppages they think, okay, we can automate as well. It’s not just for massive mines that have the scale and the money to do it. It can be for much smaller players who want to do it.”

Williams says haul-road spillage is relatively uncommon and “good loading practice will avoid it”, but it stops level 3 automated vehicles in their tracks until the obstacle is cleared and/or the vehicle can be re-routed manually. Auto-mate’s RPP sees the hazard and safely works around it.

“No route change or stoppage is required,” Williams says. “The truck just slows while it makes the manoeuvre when clear and then returns to the mission.

“A more complex scenario – without getting into traffic interactions – would be a situation where a planned mining block for a shift has now become unavailable … and a new block has been swapped in at short notice. This block may or may not be in the primary digging location and the further removed from the main haul routes the more serious an effort it will be for the L3 system to have the area mapped, haul roads and lanes designed and validated, the operational area to be segregated and the procedures made clear.

“The L4 would allow for a drag and drop waypoint creation.

“Site rules would dictate how interactions with other vehicles would be conducted, such as whether passing is allowed with enough clearance or whether autonomous trucks park up when detecting other assets until they’ve moved on.

“The system would determine truck dynamic movement based on the RPP and onboard sensors looking at road condition, vehicle attitude, entry and exit speeds and of course the performance parameters set for that mission.

Williams says mining’s “bleeding edge” automation period has seen roughly 1% of the world’s mining truck population automated in the past decade or so. Industry and regulatory structures now exist to enable faster deployment of autonomous mobile assets in the field in future, which will allow people to focus more on improving returns on a company’s investment in insitu mineral resources and physical assets, and on environmental and social outcomes.

“A lot of the framework is in place to understand how automation needs to be deployed,” Williams says.

“Level 4 introduces the next step in the evolution.

“Conditional automation has a lot of top-down control functionality.

“Level 4 empowers the onboard technology to start making safe, logical decisions to complete the mission.

“That flexibility is going to appeal to miners that have orebodies that are hard to get to, or mine plans that are more dynamic and require a more agile approach to fleet management.

“They can leverage the technology while still having all the fundamental safety practices already established.