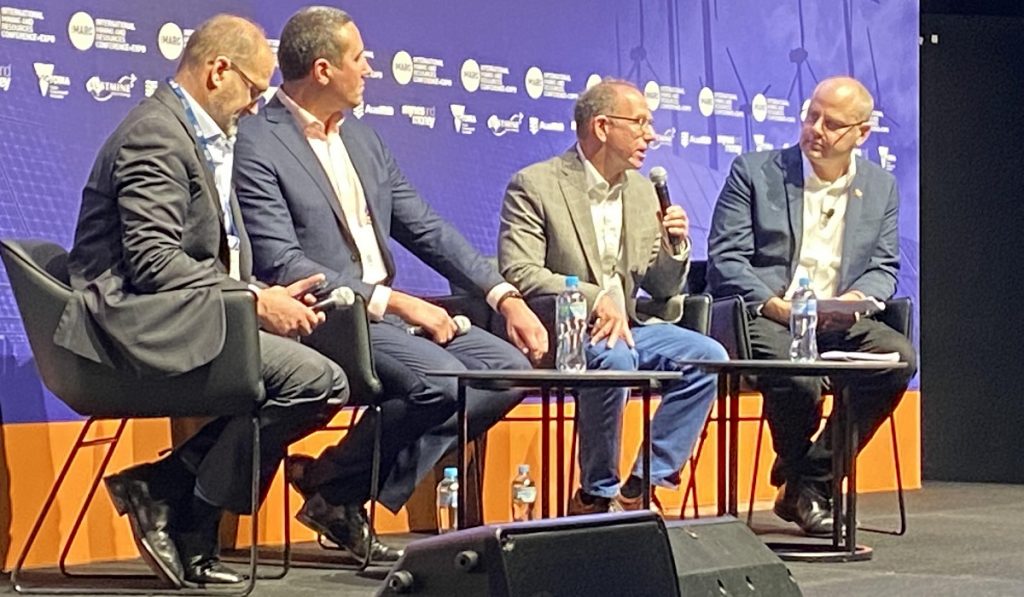 Viewpoint
Top image :
(Left to right) Charles Gillies, Nathan Flaman and Mike Zimmerman speak with METS Ignited CEO Adrian Beer at IMARC 2022
‘The thinking among a lot of the miners has changed’

Small, fast-growing technology companies are now on the radar of even large mining companies and their procurement teams, but they need to “get their story straight”, BHP’s head of innovation and two veteran investors said on an IMARC 2022 panel.

“Probably a decade ago those large companies were not willing to consider using a small, fast-growing company as a critical part of their value chain,” RCF Jolimont director Charles Gillies said.

“I think that’s changed. The thinking among a lot of the miners has changed.”

For BHP at least the door is open, according to Nathan Flaman, though “we know large companies like ours aren’t always easy to engage with”.

“The good news is we’re well aware of that and we continue to try to make it easier to engage with us. I think we’re heading in the right direction,” said Flaman, who has held various management roles in nearly 12 years at BHP.

As well as procurement, BHP has opened up several channels for engagement with tech companies, including its BHP Ventures investment vehicle, its new series of challenges inviting applicants to come up with solutions to specific technical problems, and the BHP Xplor accelerator initiative aimed at early-stage mineral exploration technology firms.

Flaman said the A$195 billion metals giant was “excited by what we’re seeing” in the global mining tech space, and offered some simple advice for companies hoping to get on the company’s long supplier register.

“I’d start by focusing on the narrative; getting that narrative right,” he said.

“And as part of that narrative, being crystal clear on the value proposition to a corporate like BHP.

“Understand the corporate’s challenges, their problems and how [your] solution is solving that.

“Often we see a solution being shopped around, looking for a problem to solve for.

“[Get] to know the customer … That’s something that we need to get better at as well – communicating our challenges and being more transparent. James Agar [BHP head of procurement] talked about that on the first day of the conference: radical transparency.

“From an innovations team perspective, we are going to be doing more of that as well and being more transparent on what our problems are.

“And then in addition to that, be aware of the competitive landscape. We’re often approached by innovators who claim that what they have is truly unique. They’ve got something proprietary that no one else has, and we’ve either seen it before or a month later we see someone else has something very similar.

“Show the benchmarking, show how your innovation compares to what else is out there in the market and how is it truly unique or truly superior to similar offerings.”

Mike Zimmerman, partner with Australian tech venture capital investor Main Sequence, said “listening to the customer … as apple pie as that sounds, is just so important”.

“And not just listening, but it’s active listening and probing as to what the customer is really trying to solve. I typically suggest to the companies I work with to ask like three layers of why. Understand how your solution solves a particular problem, understand why they’re trying to solve that problem, and then keep asking why to uncover why [they] actually need that data, and what is it that happens to that data after it’s collected and why that is important.

“Try to get down to the nub of the value and … who the users of your solution are, who else is impacted; the [overall] business case.

“I’m shocked by the amount of folks who come to us without a real in-depth understanding of the problem.”

Zimmerman said Main Sequence was managing about A$600 million across two funds. RCF Jolimont, which recently closed a second fund, had reviewed more than 1500 mining-tech focused opportunities in pursuing the 11 investments made to date, Gillies said.

While it was “tempting” to subscribe to a popular charge that miners, generally, were “conservative and stupid” when it came to technology adoption, Gillies said tech firms that got through the gate would get a different perspective.

“You’ve got to put yourself in the shoes of the customer and the customer is often running very large assets, billion-dollar assets, with very long lives, [and] they’ve got to get throughput out 24-7,” he said.

“It’s not that they’re conservative, it’s that they are rightly worried about the risk of something going wrong and the operation going down for a while.

“One of the things we always say to our companies is go to the mine site [and] talk to people who are using your equipment. You might find at head office they will be little bit stand-offish or won’t tell you much. If you go to a mine site, you go down to where they’re working, you talk to them, and you’ll get a lot of rich information about what they’re doing because these guys love what they do, they’re happy to talk and you’ll find out an enormous amount by actually just going out there and talking to them and getting close to them, because it’s surprising how many people won’t go to a remote mine site.

“I know it sounds very simple, but that’s a key thing.”