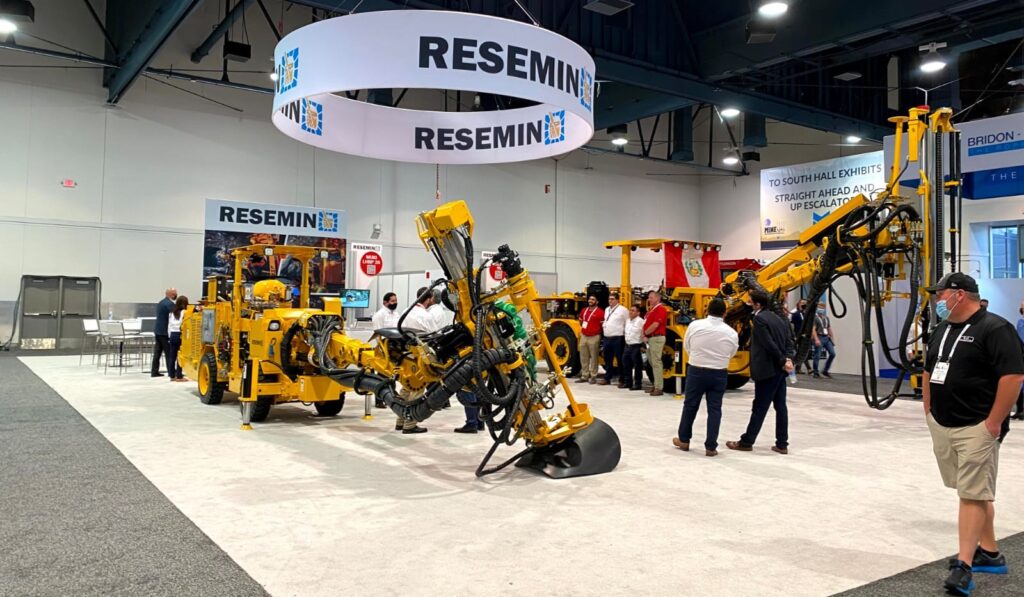 Nearly 33 years after establishing his niche mining equipment manufacturing business in Lima, Peru, Resemin founder James Valenzuela remains as ambitious as ever for the enterprise and its 700 or so local employees. “The whole world is an opportunity for Resemin,” he said this week. “Currently 60% of our turnover is abroad … and in the future this amount will increase.”

Back from a subdued MINExpo at Las Vegas, Nevada, where Resemin made its debut in the Central Hall next to the giants of the mining equipment world, Valenzuela said the coronavirus pandemic that delayed the major mining event by a year continued to create expansion headwinds for exporters such as Resemin. However, he is upbeat about the future.

“Our participation in MINExpo 2021 was an important event for us,” he said.

“We showed two drilling rigs, one Muki LHBP-2R and one Bolter 99. It is not the first time that Resemin presented itself at this international event, however, it is the first time that we had a large booth of 40ft-by-70ft located at the Central Hall.

“Due to the pandemic and travel restrictions we noticed less attendance but nevertheless key people were present. For us it has been a success.”

Recognised in various domestic and international forums over the years, Resemin’s stuttering early steps and subsequent successful expansion have been reasonably well documented. Valenzuela has said his “first step was a bad step because [we went] close to bankruptcy”. Early economic conditions in Peru were unfavourable. He started out “selling spare parts for the drilling jumbos of the brands that are currently my competitors” and then over time he “gained more experience and decided to build the complete machine”.

Initial reliance on a US manufacturer turned into a costly failure. “I learned that if I wanted to make machines I had to do it myself,” Valenzuela said.

It wasn’t until 2002 that Resemin shipped its first locally made jumbo. Valenzuela liked manufacturing: Peru was a global top-10 mining country, but “we want it to produce not only metals but capital goods”.

“You close your eyes, and open them, and 20 years are gone and you see the world a different way,” he said after earning a nomination in 2017 as Peru’s representative in international accounting firm EY’s ‘Entrepreneur of the Year’ award.

Valenzuela said this week: “In my case, I grew up in a mining town and I always had the mining drive. I certainly had an entrepreneurial spirit and realised I wanted to manufacture machines in the early 1990s. It took me 12 years to successfully build the first machine after one failure in 1994. Things came along little by little, facing challenges until we reached the situation we have today – the third position worldwide [behind Swedish leaders Epiroc and Sandvik].

“Of course there were decisions that I would have preferred not to make, but life is like that.

“To reach a goal, one usually fails several times. So my advice to others is that failures teach you to get better and better and improve yourself. You should learn from your mistakes, that’s the key to achieve success. I should say also that since Peru is a mining country it helped me a lot because I could speed up my learning process.”

Resemin’s annual turnover has grown from about US$3 million in 2005 to this year’s projected US$80m, “reflecting the growth in exports in recent years”.

“It does not mean that we will sell less in Peru. On the contrary, we are growing and we are leading the market,” Valenzuela said. The company invested US$10m in its manufacturing and assembly facilities in 2019 to increase capacity.

“We are currently working with Caterpillar dealers in some territories such as Mexico, Colombia and India, which has allowed us to reach some customers who were not aware of our brand.”

“Resemin is the leader in the market for narrow-vein equipment and we expect to offer battery-powered equipment along these lines in the coming year, so this niche market has great growth potential. I believe that battery-powered machines will be pervasive in the future. It is easier to make battery-powered jumbos than battery-powered chargers. For loaders there are still many challenges, especially in battery lifetime.”

Said to travel, pre-pandemic, up to 120 days a year visiting customers and countries on five continents, Valenzuela has said the trips are usually made with wife and business partner, Jhuliana, “so the experience becomes bearable”.

“I have a daughter and a son, and we try to travel together at least twice a year. My family is my fuel,” he said.

This week he said succession planning was a subject that had been under discussion.

“We love this job so I don’t see myself out of this business,” Valenzuela said.

“Maybe a co-operation with another key manufacturer of a complementary range of products could be an option.”