Coda looks to up the search ante in South Australia 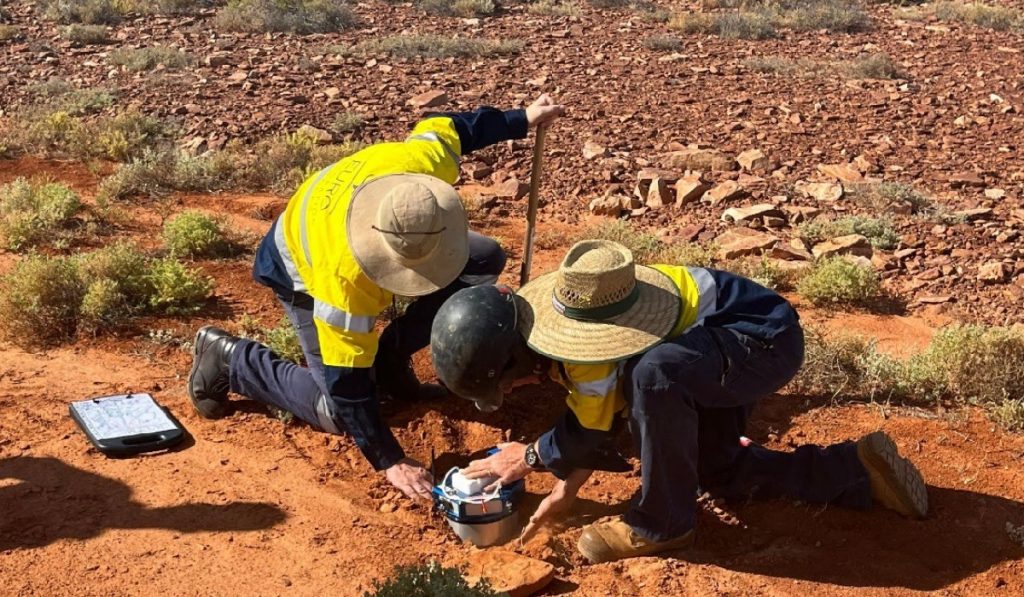 Pipeline
Top image :
Deployment of Fleet Space ExoSphere survey geodes at Emmie Bluff in South Australia
‘The massive advantage of ExoSphere is we are able to receive real-time images from the field’

Elizabeth Creek covers about 700 square kilometres of the Olympic Dam Copper Province. Coda has completed more than 23km of diamond drilling on the Emmie IOCG but says the area covered by the drilling is laterally small, “leaving vast areas of the anomaly untested by drilling and not yet covered by geophysical surveys capable of identifying mineralising structures”.

The ANT survey would enable Coda to cover a significant area at much lower cost than drilling, guiding its next stage of exploration.

“The massive advantage of the ExoSphere system is that we are able to receive real-time images from the field and react quickly to the information,” Coda CEO Chris Stevens said this week.

“This allows us to add resolution to certain areas and to really start to build up a better understanding of what is happening at depth.

“Since the discovery of Emmie IOCG in June 2021 we have undertaken a large-scale drill campaign resulting in multiple high-grade intercepts at depth but, so far, the thickness and scale consistent with a world-class IOCG discovery has eluded us. This next phase of work is designed to give us a much better understanding, not only about what is happening at depth in and around the Emmie IOCG itself, but also to a greater extent over the whole area including the AD8 and Con Ryan prospects.

“We are excited to be out at site exploring again at Elizabeth Creek and to have the opportunity to deploy this cutting-edge technology at Emmie IOCG, Emmie Bluff and the Central Elaine Zone.”

Adelaide-based Fleet Space has raised more than US$50 million of private equity funding to expand local manufacturing of nanosatellites and ANT geodes, and build its engineering and marketing teams, since its 2015 start-up. Its ExoSphere passive seismic exploration technique makes use of pervasive seismic noise from natural and anthropogenic sources to visualise a three-dimensional subsurface shear wave velocity model. Fleet Space’s ANT can cover large areas quickly and is said to be able to “visualise” below cover of more than 1000m to show the depth of structures within the cover and basement rock.

The initial circa-40sq.km survey at Elizabeth Creek is expected to produce an image of the paleotopographic surface, allowing for detailed 3D constrained forward modelling of magnetic and gravity data, as well as providing indications of velocity anomalies which may indicate the presence of material iron oxide deposition.

Coda says the geometric insights may provide a more detailed understanding of major horst and graben structures as well as potentially indicating the presence of any large-scale conduits not yet identified by drilling.

“In addition to assisting with exploration for IOCG-style mineralisation, the ANT survey is also expected to assist in the identification of any additional areas of Tapley Hill Fm shale, which is the host rock for the shallower copper-cobalt deposits that occur across its tenure,” Coda says.

The company, which has a current market value below A$40 million, is finalising work on a scoping study on Emmie Bluff.