Coda to look at electric gear for South Australia project 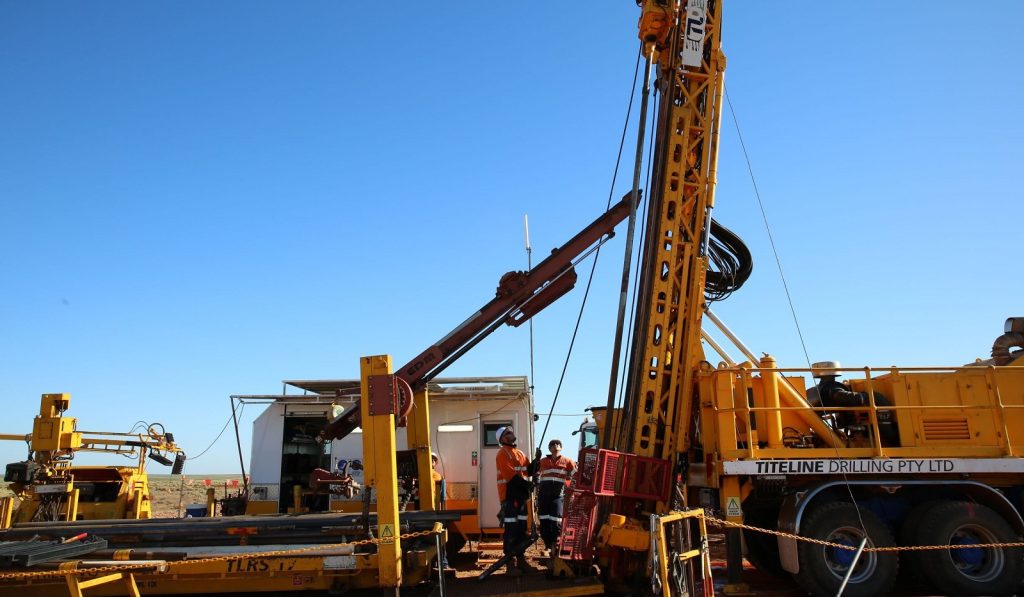 Pipeline
Top image :
Drilling at Emmie Bluff in South Australia
‘Of particular note is the choice to design around a diesel-based fleet’

Coda Minerals doesn’t expect a deep dive into non-diesel mining equipment options for underground and surface mining at Emmie Bluff in South Australia to delay delivery of a scoping study in the March quarter next year.

The ASX-listed junior, which has outlined resources containing an estimated 560,000 tonnes of copper at Emmie Bluff, says a positive “go-forward” mining study to feed into the scoping study uses industry-standard equipment and techniques to achieve 2.5 million tonnes per annum ore feed to a proposed plant recovering copper, cobalt, silver and zinc.

Flat long-hole open stoping has been picked among four options as the optimal underground mining method, while contractor openpit mining of the satellite MG14 and Windabout deposits is expected to keep the plant running at nameplate rates during the planned four-year development and ramp-up of the underground mine.

Coda says 17-tonne underground loaders and 50t-payload trucks present a good “conceptual” option at this stage, but “alternative equipment of comparable or better specifications will be considered at a later date as part of further feasibility studies”.

“Of particular note is the choice to design around a diesel-based fleet,” the company says.

“This was done for simplicity and to develop a baseline for potential productivity using modern equipment and techniques. However, the company intends to carefully consider the options for a fully or partially electrified fleet as part of later studies, to minimise carbon emissions, reduce ventilation requirements to manage the diesel particulate concentration and heat, and due to the potential for productivity improvements in certain applications.

“As a scoping level study, the current work leaves open multiple avenues and opportunities for value improvement, optimisation and trade off studies. These include further study and optimisation of the Emmie Bluff mine plan to bring forward first production; work to evaluate the potential for application of mechanical cutting technology to the mining of Emmie Bluff; and a programme of metallurgical testwork focusing on potential improvements to the back-end hydrometallurgical circuit.

Coda has 100% of Elizabeth Creek, including Emmie Bluff, 100km south of BHP’s Olympic Dam copper-gold-uranium mine and 15km from its new Oak Dam West project. For the Windabout and MG14 satellite deposits, indicated resources total 18Mt grading 1.14% copper-eq, and 1.8Mt at 1.67% Cu-eq, respectively.