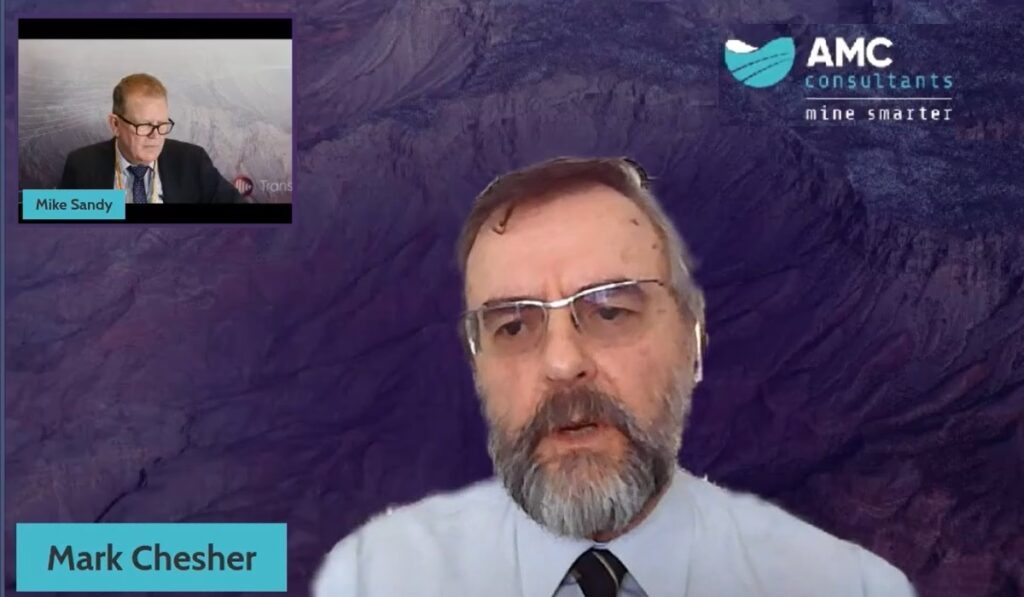 Viewpoint
Top image :
AMC Consultants' Mark Chesher and Mike Sandy (inset) talk caving around Caving 2022 in South Australia
‘The industry has been slow to recognise there is a massive challenge looming in providing support to upcoming projects’

Two of the world’s most experienced underground mining practitioners believe technology is playing a bigger part in shaping financial returns from multi-billion-dollar cave mines and can help the industry test new caving depths.

Speaking on the sidelines of Caving 2022 in Adelaide, veteran AMC Consultants mining engineers Mike Sandy and Mark Chesher probed key issues and trends in the block and sub-level caving field on a webcast.

Sandy, leader of a global team of 15 in AMC’s geotechnical engineering practice, was among about 500 people at the event, which he said was attended by a “caving hall of fame”. Delegates came from Australia, Canada, Sweden, Mongolia, Chile, US, Indonesia and South Africa, representing major underground mine operators such as Rio Tinto, Newcrest Mining, Codelco, LKAB, Freeport-McMoRan, BHP and OZ Minerals.

Sandy said the conference heard about growing industry interest in caving operations, as a viable replacement for surface-resource supply of high ore tonnages to large-scale mills.

“Caving is often the only sensible option for larger, low-grade, deep projects,” he said.

“We’ve seen a progression from the 80s and 90s to … deeper projects. We have in Australia some of the deepest caving projects in the world.

“The Telfer sub-level cave is at around 1200m, Cadia is now developing its third panel cave around the 1400m depth mark.

“[In Mongolia] Oyu Tolgoi is at a similar depth. Those are world-leading projects.

“These are depths that wouldn’t have been considered feasible in the [past].

“The challenge is in making sure the design is properly informed.

“If you go into a project with inadequate understanding of the geotechnical and other risks, clearly you’re risking your shareholders’ funds in an inappropriate way.

“Orebody knowledge is still key, particularly the geotechnical conditions, so the early designs are appropriate for the deposit. One of the challenges of course is balancing the need to commit to some of the early design features of the project before the conditions are fully understood to avoid extending the lead time.

“Some of the important factors that affect final design, such as insitu stress and structural conditions are usually only fully understood when underground access becomes available.

“The lead times are staggering and there is obviously a need to commit pretty large capital to the project. So that whole area of geotechnical risk is one [where] there is a significant focus on trying to better manage that on projects going forward.”

Sandy said the three-day conference heard about latest applications of “a number of emerging technologies that are making our lives as geotechnical engineers a lot easier, particularly the visualisation tools that we are seeing come into widespread use”.

“Structure is always a major issue for any mining project, but in caving it is always a key consideration. Being able to develop and visualise 3D structural models has been greatly enhanced with tools like [Bentley Seequent’s] Leapfrog.

“I think the other emerging technologies that are useful [include] the use of hydrofracturing to precondition deposits that historically would have been considered very difficult caves because of the better rock quality that some projects have been developed in.

“Conversely, we’ve got a number of projects that are being developed in very poor ground conditions, or high stress conditions, and we’re seeing significant improvements in ground support technology to handle high deformation and seismic conditions.

“In the last 10 years there has been a real improvement in the industry’s ability to handle those very difficult conditions and it’s largely through innovation in ground support and getting reinforcement elements that can accommodate either high seismic demand or deformation, and we’re seeing some good examples of that … particularly in the deeper mines like Oyu Tolgoi and the Perseverance Deeps block cave [in Western Australia].

“[Another area] receiving a lot of attention at the moment that’s changing our perspective on caving is in the development of … monitoring systems which are giving us insights into caving that just weren’t available 20 or 30 years ago. And that’s allowing us to challenge some of the historic paradigms on issues like cave development and growth, particularly on material flow in the caves and how that actually works, because until quite recently most of the information about material flow in caves was based on experience and largely guesswork, I suppose.

“Most projects have introduced lidar-based systems to track deformation and the rock-mass response to caving. That’s giving us information that we can bring into numerical models and to calibrate them, in turn giving us a high level of confidence in using numerical modelling for these complex caving problems.”

Chesher, a mining engineer with nearly 40 years of experience in the industry, highlighted the declining rate of university engineering graduates entering mining globally and suggested new skilled professionals in the geotechnical field were in short supply.

“I think the industry has been slow to recognise there is a massive challenge looming in providing support to these upcoming projects,” Sandy said.