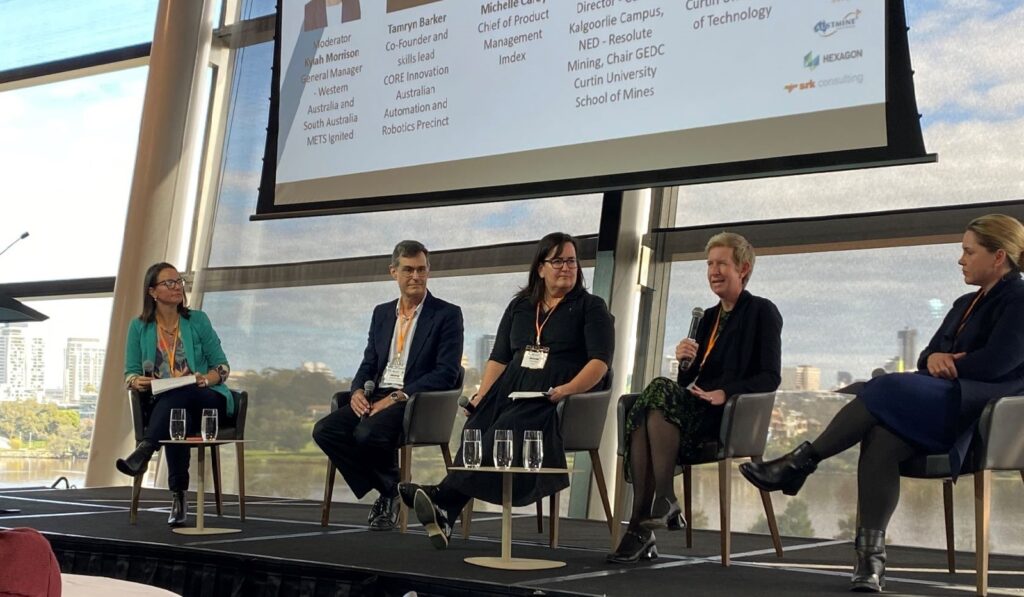 When Michelle Carey decided to leave her exploration manager post at BHP 14 years ago and join a mining technology company the slightly bewildered response of her colleagues was not unexpected.

“Why on earth would you work for a dirty supplier, was in essence how people perceived the transition,” she told a major industry forum in Perth, Western Australia.

“That [negative] sentiment has shifted now but if I think about the early days of recruitment of my team that was also really difficult for the same sorts of reasons. One of things that I think is changing now is the sort of technology companies we represent can have important employee value propositions and building those is really important to me.”

Carey has been with Imdex since 2012 when it acquired ioGlobal, where she was chief operating officer. She is now chief of product management and marketing at one of the world’s largest mining technology companies.

Carey was speaking on the GMG Austmine Forum panel about “shifting the mindset [and] building the culture, people and processes for a more progressive mining industry” with Tamryn Barker, co-founder of Australia’s CORE Innovation Hub, and Sabina Shugg and Rob Solomon from Curtin University. Kylah Morrison of METS Ignited was the moderator.

Carey said the diverse and flexible work at mining tech companies such as Imdex was a drawcard in a highly competitive labour market.

“There’s that flexibility culturally perhaps because rather than that drive for production and meeting tonnes, our drive is a more creative one,” she told the forum, hosted by the Canadian-based Global Mining Guidelines Group and Australia’s Austmine.

“Our drive is more about what’s the next big thing. Perhaps that allows a more diverse culture to foster from the start.

“I look at our team out in Balcatta – the Silicon Valley of Perth – [where] we have software developers, we have geoscientists with PhDs, we have ex-drillers and we need all of those skillsets working together to create the products that we put into the market.

“That galvanises everyone, but it also allows us naturally more diversity. We find that when people join us it’s easier for them to get really engaged in what they are doing because it’s very easily joined to an outcome.

“Their ideas – data scientists are a great example – are made into products that customers are going to use and Imdex is going to create significant revenue from. They get to feel it’s very concrete for them why this cool thing they are working on is actually going to have an outcome.”

Shugg, also founder of industry group Women in Mining and Resources WA, agreed that METS companies could provide a more stimulating work environment than mining companies and employment in some other industries.

“This is possibly where the METS sector is going to have an advantage because some of these companies can provide better workplaces for these people that aren’t just rows of desks where everyone has their earphones in,” she said.

The forum heard that technology companies could also play a key role in changing wider perceptions of the mining industry.

“We are not mining companies, we are one step removed, when we talk about what we do to improve productivity in mining, and help to decrease the [environmental] impact of mining and the benefits of that.”

Barker said world-leading facilities such as the Australian Automation & Robotics Precinct being established north of Perth – which CORE will operate – offered a fertile breeding ground for people, innovation and new technology in the automation and robotics space. With partners METS Ignited, Amira Global and Robotics Australia, CORE was “keenly anticipating growing collaboration and partnerships with you, across industry, innovators, education, research and government”, Barker said.

However, attracting Gen Z students to work in the mining industry would not be easy, a high-school teacher in the audience told the forum. She said the industry needed to be more visible, work with teachers to educate them on mining career options for students, and offer more direct pathways from school to industry.

“There are many different competing elements for their [students’] attention, and their attention span is very short,” said Clodagh Guildea, STEM leading teacher at Joseph Banks Secondary College.

“They are not very interested in going to university, generally.

“They don’t really think about long term, they are thinking short-term fixes for things.”

Solomon said he looked at the new intake of Curtin University’s Western Australian School of Mines (WASM) students a week ago and there was plenty of cultural diversity “but in terms of gender diversity, we’ve got a problem”.

“We need to do something about getting women into STEM-related disciplines,” he said.

“We need to interest them in high school, but broader than that [are] the issues of making mining and mining-related industries interesting for all students.”

Solomon said the draw of not just producing mobile phones and other modern essentials from dirt or seawater, but doing it more sustainably, should not be understated.

“We need really bright people that are interested in science, strategic thinking. How do we sell that message to the high schools?”

Audience member, Dave Lawie, chief technologist – mining at Imdex, said a solution to some of mining’s image problems could be “right under our noses”.

“Every month, 140 million young people start up Minecraft and play that game,” he said.

“Minecraft is not a million miles away from actual mining.”