Elphinstone charges back into underground market 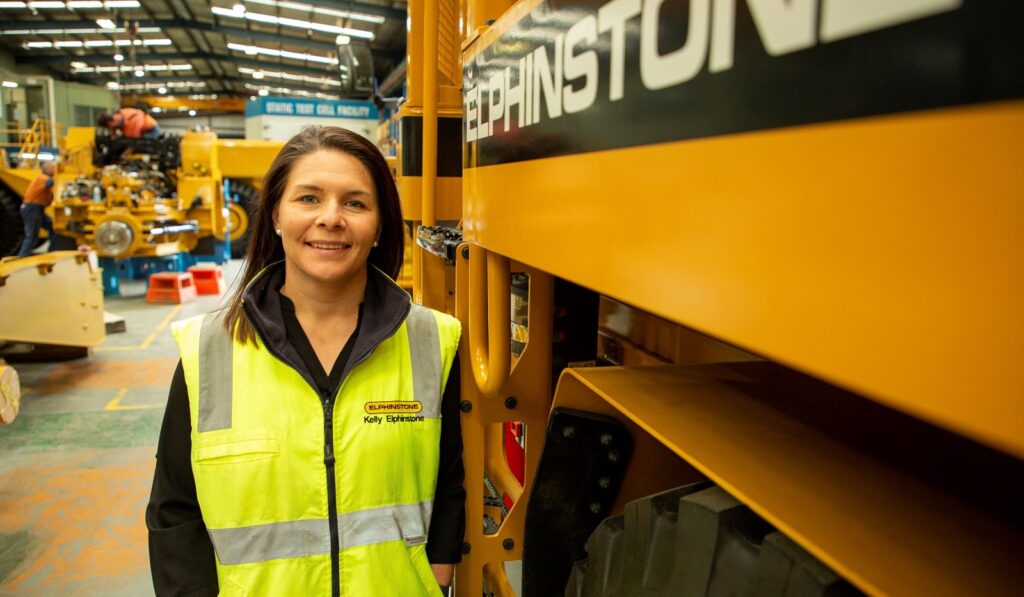 The most successful name in Australian-produced mining equipment sees a big future for battery-powered underground machines but says the race is on to gain a significant foothold in key international markets and secure local investment and jobs. Tasmania-based Elphinstone Pty Ltd certainly has the pedigree to be considered a contest frontrunner.

“The Canadian industry is telling us they won’t accept tenders for anything that’s not battery electric beyond 2023,” Kelly Elphinstone, executive director of parent organisation, Elphinstone Group, told InvestMETS.

“You’ve got countries like that who are saying, don’t even talk to us unless you’ve got something available.”

Elphinstone, the Burnie business established by Kelly’s father Dale in 1975 that built an international reputation on the back of its market-leading underground mining loaders and trucks, is expanding in the underground ancillary vehicle market. Kelly Elphinstone believes battery electric equipment will account for at least 50% of its sales by the end of this decade.

With the world’s biggest mining companies pledging to cut carbon emissions to net zero by 2050, Elphinstone is deploying A$5.17 million of Australian federal government funding to help develop a prototype mining support vehicle by March 2024.

Kelly Elphinstone says the domestic market – the world’s largest hard-rock underground equipment market – isn’t moving as fast on electrification as Canada and Europe. She says local miners are migrating to Tier 4 standards for off-highway diesel engine emissions, but believes while lower-emission-standards might continue to be followed in some under-regulated offshore markets the rest could “end up skipping the Tier 4 solution and going straight to battery electric”.

Elphinstone is essentially still in its “start-up” phase, says Kelly, after re-entering the market in 2017 when Dale took back control of the Burnie assembly plant he sold to Caterpillar in 2000. Elphinstone Pty Ltd is a manufacturing subsidiary of the Elphinstone Group, founded by Dale more than 45 years ago. The mining services magnate was recently placed 136th on The Australian’s Australia’s Richest 250 list with a net worth of A$870 million, up from $790 million the previous year.

Elphinstone has about 180 of the group’s 2500 employees in Burnie, the northern Tasmania port town of circa-20,000 people.

“Dale is still the executive chairman,” Kelly said. “He will be 71 in Feb [2022], so the plan was for me to come into the group office and learn more about our other businesses. We had been putting that off for a long time because of the demand on the manufacturing business. But when Warren was ready to step into that he was a perfect solution. He’s got a huge amount of experience in our underground mining business and was already a director so it just worked beautifully. I am still a director on the board of that business and I am still heavily involved, but it just frees me up to take some other duties off our chairman.”

As well as battery vehicle development, Elphinstone has been investing heavily to build out its underground support machine range. “We have a couple of additional models we want to continue to finalise and release,” Kelly said. “We have our concrete agitator trucks out there but we don’t have a shotcreter that complements those. We’ve got a pretty big drive to develop and get a shotcreter in the market, and finalise our product line-up.”

Tier 4-engine vehicle conversions and the addition of low-profile versions of certain products are other projects. Remote-control capability across the product range is an in-house technology focus, but the company is open to acquisitions to speed delivery of different technologies to the market.

“The plan for 2022 is to establish and finalise our base product range but then finalise the different iterations of each of those products as well,” Kelly said.

“Pretty much everything we have got to date we’ve designed from the ground up ourselves and we’ve retained the IP.

“If we get to a point where we need to get something to market more quickly than we are physically able to because our people are already stretched doing everything else, we would look at acquiring an existing business or subcontracting the design of whatever it is we need. We are open to all solutions to get the product out to market in the time we need to but there is no doubt our preference is for organic growth and doing that ourselves.”

Many lessons learned over decades of successfully competing in the niche international mining equipment arena are being applied to speed the progress of the “start-up” Elphinstone 2.0.

“One of our biggest challenges with a new product, and anyone’s challenge in a new business, is getting them into the mines and proving them,” Kelly said. “You’ve got to get them out there, you’ve got to get a lot of hours on the product and then prove [value] to the customers. The first thing they ask is, where can I go and see one of these working? What are the life-cycle costings on this product?

“It’s really hard when you haven’t had a product out there for 20,000 hours yet. A lot of what we’ve been doing is putting our money where our mouth is and basically giving machines to our customers on trial to say we can’t give you lots of examples yet because there aren’t enough in the field, but here, why don’t you go and try it for yourself.

“So far every one of those has resulted in the sale of the product. So it’s a very worthwhile exercise for us.”

One of only a handful of women to lead mining equipment, technology and services (METS) companies worldwide, Kelly says a trade-focused path into the industry needs to be encouraged as an alternative to tertiary-based engineering and other courses.

“We get quite involved in a couple of local projects for young girls who don’t want to go to university. They want to do a trade but university is very heavily pushed as the only option in high schools. Teachers by their very nature are academics and so there is not a lot of promotion of non-academic career paths and it’s very much seen or promoted as a backstop if you aren’t smart enough to get into university and we’ve got to change that. It’s got to be an equivalent option just as good if not better option to go and get a trade than it is to go to university.

“There are a lot of young girls that are keen to do trades, so if we can get them into trades we can get them to finish their apprenticeships. A lot of tradespeople then go on to do engineering and they actually make the better engineers. Those people often go on to start their own businesses.

“I think probably if we want more females and more female METS leaders, that’s where it needs to start. We’ve got to allow them to feel comfortable about wanting to do apprenticeships because we are manufacturing businesses and they’ve got to get in there somewhere.”