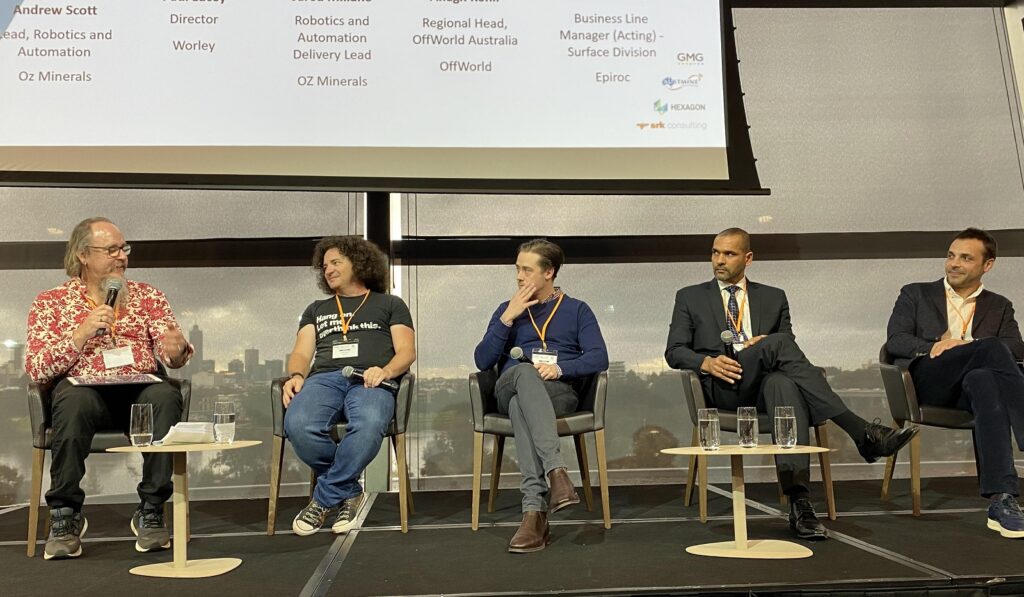 A new generation of battery-electric mining equipment may not be commercially available yet, but future mine studies are increasingly plugging it into calculations that will guide project decisions in the next five or so years, a conference in Western Australia heard this week.

“We don’t even have a good view of what that technology looks like,” Paul Lucey, who has joined Worley’s technology ventures group, said at the GMG Austmine Forum, attended by nearly 200 delegates.

“I’ve never seen that in my 30 years in mining and I’m seeing it in nearly every study I do now. So it [accepted approach] has turned.”

They were there to talk about designing the mine of the future. GMG is the Canadian-based Global Mining Guidelines Group.

Industry veteran Scott, a champion of mining innovation who only recently joined Australian copper miner OZ, said inserting all manner of possibilities into scoping studies, only to go back “to what we’re comfortable with” by the time a project was presented to a board in a feasibility study, was the only path he had known in more than three decades in mining.

“I think now for the first time in my career electrification is challenging the status quo,” Lucey said.

“Doing a number of studies now nearly every customer says this mine has to be electric.

“We’re talking about mines that are only 5-10 years out. So we’re designing a mine and we don’t know what the equipment looks like. Normally we never do this when you get to a certain stage in that [feasibility assessment process].

“Some of the stuff that we normally put in a trade-off study or in the technology review is actually coming directly into the initial study and being put forward as a recommendation that you pursue.

“Some of the recent [studies] I’ve done this year are some of the hardest I’ve ever done because electrification is so new. We’re talking about some of the first machines only hitting the mine site now. Some of them that are still in prototype stage, and we’re trying to build a mine in five years’ time using the equipment.

“The one thing we know now is that what we know now will be vastly different [in five years] because the technology is moving so fast.

“[But] we now have to completely change the way that we operate that mine, and so everyone is working a lot harder to come up with different things.

“Because diesel is not an option anymore in some applications we can’t go back once we get to the next study. What you [normally] do is put all the cool stuff in and it gets to the bankable feasibility and you rip it all out and it goes back to diesel.

“We don’t have that option, which means we’ve cut one leg off and we have to grow another leg.”

Lucey said many mining companies were already concerned about an emerging mine-electrification skills gap. “They’re worried about how they change their diesel fitters into people who can work on electric equipment,” he said.

Thinking about mine designs of the future is also causing palpitations in other areas.

“I think mining is missing the skills that we need in the next 10 years,” said Millane, a mechanical engineer from Queensland who has been in the industry for about a decade.

“I don’t think it values enough the mechatronics and computer science space, especially in-house; we tend to go external.

“The flexibility that mining wants to be able to adapt systems … I see that that needs to be a core capability within mining at the site level.”

Lucey said in WA the mining industry now employed more software developers than any other industry. “It took over from banking about three years ago,” he said.

“Over the next 10 years WA needs about 15,000 workers in the automation [and] data science space, and we’re only going to produce 13,000. Now there is a need for another 10,000-15,000 beyond mining, and we just don’t have that capability here at the moment. Even if we ramped up aggressively in education we’re not going to get there, so we’re going to have to bring those people in.”

Ironically, for all the talk about skills gaps, Lucey said the biggest change in the mine of the future would be the complete absence of people from operating areas.

“I don’t think we’re going to get away from the style of mining that we do. That seems to be it for the moment. But the big change will be you just won’t see any humans in the picture,” he said.

The conference also heard about the surge in AI investment and application, across a range of industries. With rumours of self-aware algorithms circulating, Scott asked the panel if they saw a time when “our mine manager or our senior executive is an AI?”

“Ultimately we have to hold someone responsible and you can’t hold an AI responsible.”

The youngest member of the panel, Millane, said: “I don’t see it in my lifetime.

“But I would like a general manager to be a bit more data-driven.”