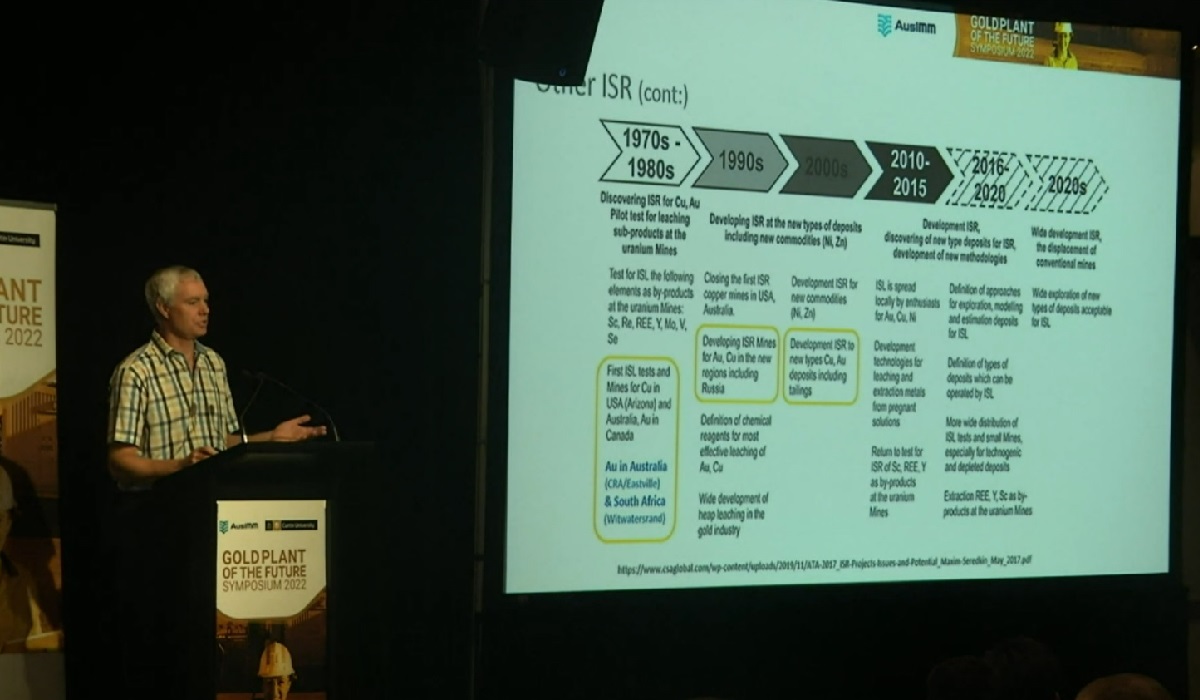 A lot more work needs to be done to demonstrate favourable economics, but CSIRO’s Dr Paul Breuer believes significant application of insitu recovery (ISR) mining outside of the world’s uranium sector is “inevitable” in the next 20 years due to critical mineral demand and environmental pressures on traditional hard-rock operations.

Speaking at the AusIMM Gold Plant of the Future Symposium 2022 in Australia, Breuer conceded ISR hadn’t gained traction in the gold industry and that “may not happen in the next 5-10 years”. However, the CSIRO principal research scientist, gold processing, said “ISR for gold is inevitable”.

Why the fervent belief? “The obvious attraction is we’re not mining and digging up 99% of gangue minerals that are of no value to us and creating stockpiles on the surface. That eliminates a lot of energy consumption and gives us a site with a lot less remediation to deal with,” said Breuer, a chemical engineer with more than 20 years’ experience in gold hydrometallurgy research and process optimisation.

Lower start-up capital and rehabilitation costs, and then lower operating costs, than for conventional hard-rock operations worked in favour of ISR and might even offset lower recoveries in certain comparable applications to yield “equivalent profits”. Breuer said without effective liberation of gold and other minerals, as was achieved with hard-rock comminution and flotation circuits, recoveries were the major factor working against ISR. And “without any fracturing of the rock [in most conventional hard-rock deposits] you’re going to have zero recovery”, he said.

“Access to metal values is where the opportunity … and the risk is.

“Gold recovery is going to be the critical part, [hence] the [need for enhanced] accessibility. There are numerous technologies under assessment for creating accessibility.

“We have [enhanced] skills in directional drilling now. Everyone draws insitu as vertical drills but we’ve got to think outside the box. It’s three-dimensional; you can drill in any direction. So you could have injection wells that could be across the top of the orebody, and extraction wells that are underneath, and be using gravity as a way of minimising any losses from the deposit.”

Breuer said about 50% of the world’s uranium production currently came from ISR, “also known as insitu leaching or invisible mining”.

“The copper industry is probably leading [outside of uranium] at the moment … and I expect that in the next 5-10 years it’s going to be the copper industry and some of the critical metal industries where we’re going to see a push and a change in ISR.

“If you look at the predictions in terms of mining development that is needed to sustain or to meet the demand that is predicted … they’re talking copper [output] that is five-times current production rates; they’re talking lithium at 13-times.

“We need to be able to get to the deposits that are going to be needed to meet that demand. A lot of them are going to be in places where current opencut and underground mining is not acceptable, and ISR may be the option that’s available.

“Or it’s really the only option that’s left.”