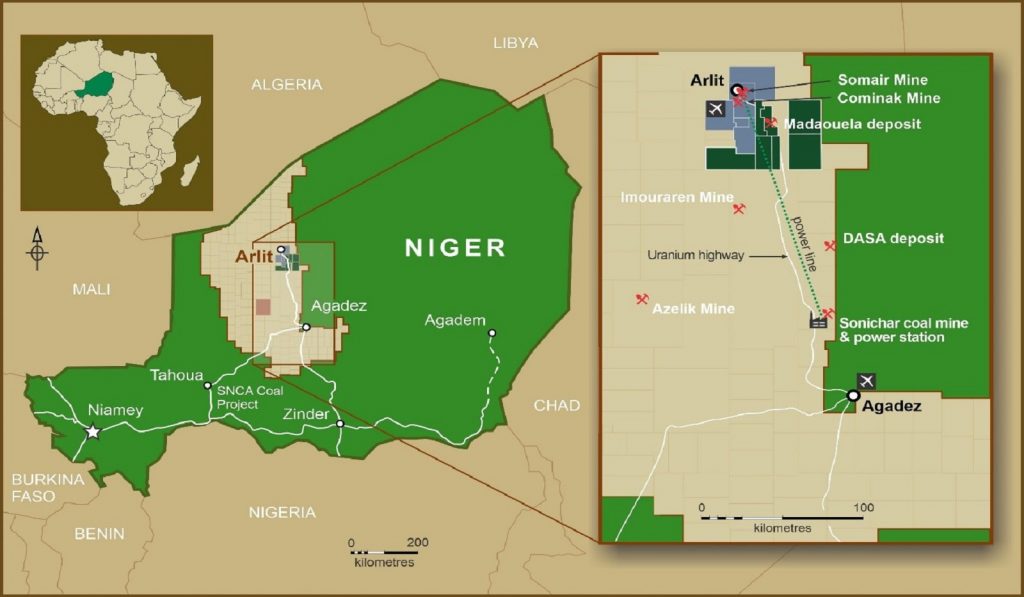 Pipeline
‘We maintain our projection to be able to start producing in 2025, subject to project financing’

Vancouver-based GoviEx Uranium CEO Daniel Major maintains the company’s proposed US$343 million Madaouela uranium project in Niger is “ready for development and to potentially become one of the first new mines developed in this exciting new uranium cycle” on the back of its latest feasibility study results.

“The next steps for us are to accelerate project financing and to continue to pursue offtake opportunities,” he said after the SRK Consulting and SGS Bateman produced study pointed to modest after-tax NPV (8% discount) of US$140 million and IRR of 13.3% for an operation delivering an average 2.67 million pounds of U308 per annum over 19 years.

Using a $65/lb base-case uranium price (plus $11/lb for molybdenum credit) over the projected life of mine, Madaouela could yield $672m LOM free cash flow, including capital expenditure, and average annual EBITDA of $82m.

“The FS confirms the strength of the Madaouela project and its ability to deliver good economic results at a time when inflationary pressures are having a significant impact on the development of new projects and operating mines,” GoviEx executive chairman Govind Friedland said.

“The completion of our FS represents another major step in our company’s development and its goal of becoming a significant uranium producer.

“This FS, along with the current strengthening uranium demand combined with the fact that our project is fully permitted, distinguishes Madaouela as a unique development opportunity.”

GoviEx’s Toronto-listed shares are down about one-third year-to-date, at C26c, capitalising the company at about C$154m.

Major said: “We believe the results of this FS will appeal to stakeholders, potential investors, customers, and lenders and will allow us to evaluate a wide range of development alternatives as we continue to focus on maximising shareholder value. We maintain our projection to be able to start producing in 2025, subject to project financing.”

Intensive pilot plant testing is said to underpin forecast LOM recovery of 92.2% for uranium and 80.7% for molybdenum.

The developer is looking for 8MW of hybrid solar power to contribute 26% renewable power generation, as an adjunct to grid power.

Madaouela is in the Agadez region in northern Niger near French energy company Orano’s (ex-Areva) existing Somair and Cominak uranium operations. Existing infrastructure and an experienced local uranium mining labour force can benefit GoviEx, the company says. It owns 80% of Madaouela with the Niger Government holding the balance.

Niger is the world’s fifth largest producer of uranium in the world and was Europe’s largest supplier last year.

GoviEx wants to develop a standard truck and shovel openpit mine on its Miriam deposit to deliver one million tonnes per annum of ore for five years to its proposed process plant. The company says re-scheduling of pre-production waste stripping has reduced capex and cut the task to nine months instead of the 24 months outlined in its prefeasibility study. The life-of-pit stripping ratio was reduced to 9.3:1 from the 9.9:1 set out in the PFS.

Underground mining of the M&M and MSNE-Maryvonne deposits after openpit production winds down is proposed, with conventional drill-and-blast development and room and pillar operations, and planned X-ray fluorescence (XRF) sorting of ROM material at the mine portal before trucking of ore to the 1Mtpa plant.

Again, GoviEx believes it can benefit from a latent labour pool after the 40-year-old Cominak underground mine was shuttered last year.

“M&M development is planned to take 18 months until first ore, with an estimated production duration of 11 years,” the company said.

“MSNE-Maryvonne decline and development are planned to start in year 10, with a development period of 28 months and an estimated production duration of five years.”

GoviEx says it is looking at two VeRo Liberator mills to replace SAG milling in its grinding circuit, to reduce capital and operating costs, and power draw.

Infrastructure-wise, the project “benefits from its close proximity to the uranium mining towns of Arlit and Akokan, and this includes access to grid level electrical power near the project boundary”.

“However, grid power is not stable 24/7 and accordingly, the feasibility study includes addition of a standalone hybrid diesel-solar-battery power plant to complement grid power and ensure energy security as well as optimise running costs through renewable energy supply to the project,” GoviEx said.

The project’s tailings storage facility (TSF) has been designed for filtered tailings, like the disposal method used at Somair and Cominak.