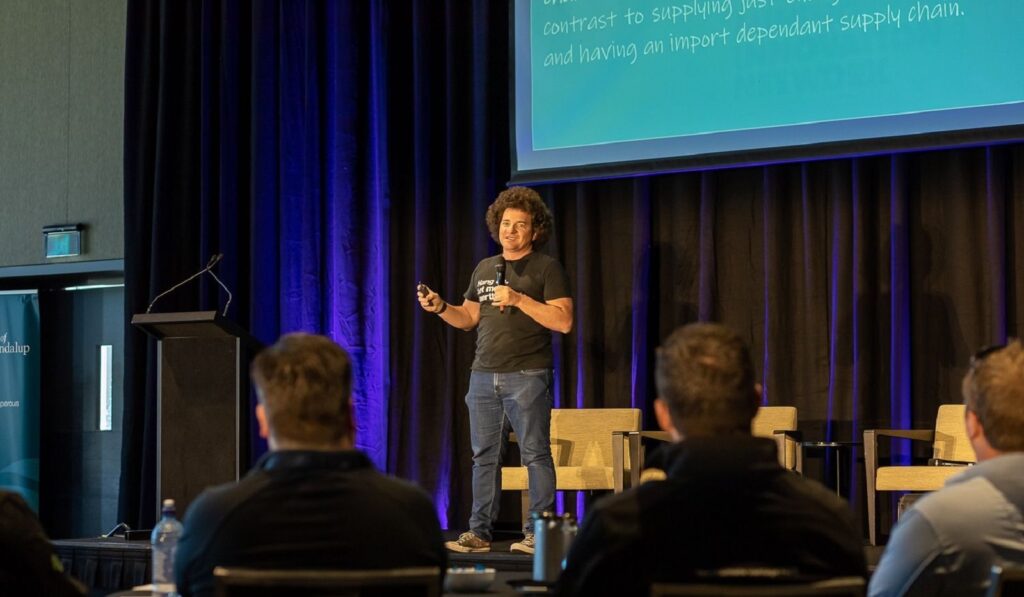 Viewpoint
Top image :
RoboWest CEO Paul Lucey: "Our children need to learn about robotics, automation and AI."
Former industry exec says WA can be major tech hub, if it has the talent (and vision)

Western Australia has so far failed to convert advantages of having the world’s biggest robotic mine truck fleet in its backyard into a stronger position in the burgeoning global autonomous mobility market, according to the head of newly formed RoboWest. But some simple steps could create a torrent of talent to drive “a whole new industry for WA”.

“And if WA needs to do one thing it’s to diversify its economy,” said Paul Lucey, the former global VP of technology and innovation at Gold Fields and serial organisation starter.

“Two-thirds of our economy is based on the resource sector; that’s great, we all live in this great, fantastic bubble here in WA,” he said.

“We need to think about our future and this is the kind of thing we need to do for the future. These things take 10-20 years and this is a 10-year process.”

“This” is a world-class robotics, automation and AI education, R&D and industry precinct essentially embracing the Perth metropolitan area, but initially focused at Joondalup, about 30km north of the state capital, where the latest instalment of the Robotics & Automation in Mining Conference was held this week.

Just north of the satellite city, at Neerabup, more than A$20 million has been committed by the WA Government to the “Australian Automation and Robotics Precinct” – don’t call it an “economic zone”, says Lucey, “it’s against our [national] constitution” – which is expected to be operational in a year or so.

Lucey hosted the launch of RoboWest, which describes itself as a “cluster for robotics, automation, AI, cyber security and data science … technologies [that] represent some of the faster growing global trends in the world today”, in August. The fledgling organisation is an advocate/architect for an “entrepreneurial ecosystem” that unlocks new (private and public) funding, skills, work and innovation spaces, and markets.

Lucey spent time in the US from 2015, immersing himself in the tech “start-up world” in that country. While he was there he tried to convince mining equipment giant Caterpillar to relocate its mining technology development and testing activities to Perth, where one of the largest Caterpillar dealers in the world is based and in a region where it was delivering most of its robotic mine trucks.

Reasons for not making that move beggar belief (one was not being able to get access to suitable land in a 2.5-million-sq.km state with 2.5 million people in it), but Lucey takes some comfort from the fact that a process was started that led to the land at Neerabup being made available to host what he hopes can become a magnet for smart money and people (and robots).

The Joondalup conference heard earlier from WA mines minister Bill Johnston that a miner time-travelling from a past 40 years ago – when the industry employed the fairly simple process of “blast it, dig it and ship it” – would quite possibly be bamboozled by today’s drones, gigantic automated trucks and trains, and robots handling dangerous tasks. He might be even more surprised by the unchanged blasting, digging and shipping after four decades, but he’d definitely be impressed by all the computers and empty cabs atop two-storey vehicles.

“WA’s become a real hub for space-age technology and it’s no surprise Perth was chosen as the headquarters for the Australian Remote Operations for Space and Earth [AROSE],” Johnston said.

The focus on, and investment in, making Joondalup “Australia’s first urban centre for artificial intelligence and robotics”, and the Neerabup tech hub would build on what’s being achieved by Pilbara iron ore miners, according to the minister. “By the end of next year [there will be] 500 automated haul trucks here in WA. So when you read about tests on an individual truck in an individual warehouse in Singapore, or some trials of self-driving vehicles in California, contrast that with nearly 500 automated trucks in operation in WA … You can see WA is at the leading edge of automated haulage and transport”.

While obviously thankful of the chance to live without COVID in “West World” and to be paddling on what could become a decent wave of investment in robotics and AI in Perth’s northern suburbs, Lucey suggested the minister and his advisors needed to get out more. He said the assertion that WA was a world leader in autonomous vehicles was outdated.

“We have so much IP associated with autonomous equipment but we don’t use it in the public space. We know other countries are doing it and have been doing it for some time and we’re missing out on that opportunity particularly since we have the skillset to do it.

“In California in 2020 there were 769 autonomous vehicles on the road. And I can assure you those vehicles have now done more kilometres than all the kilometres the autonomous haul trucks have done in WA. We were once leaders but we’re now well back in the pack in that space.

“In terms of comparisons with different countries … we have the same level of capability for autonomous vehicles as what Indonesia does.

“We’re capable of doing autonomous vehicles. There are companies in this room that can build an autonomous vehicle. A project I did with Fortescue [Metals Group] actually built three perfectly good autonomous vehicles that would be very good on public roads. But we just can’t get them on there. We have the capabilities and skills to do it, but we can’t actually get there to do it.”

Lucey said “accelerated” regulatory reform was one vital step required to propel WA and the rest of Australia, faster, down the road to mobile autonomy and a world-class domestic technology development and production capability. National and state regulations related to autonomous public-road vehicles were already antiquated and not based on government exposure to real-world changes (Lucey believes current laws in Australia are a product of Google-learning and pub drafting).

“I said to [heads of] Main Roads WA and the Department of Transport, do you ever speak to the mines – they’ve been doing autonomous vehicles for 20 years? No, never spoken to them about it; we wouldn’t learn anything from them … It’s completely different.

“Well, the technology is exactly the same,” Lucey said.

“And the process that they went through is exactly the same process you would use and that other companies have followed in the US to get autonomous vehicles on the road. So that would be a good start, to start communicating with other groups that have done it.”

“Nearly all economic modelling in Australia by all levels of government uses these codes. If you don’t have a code, you don’t exist,” Lucey said.

“This is how government allocates funding, areas of priorities and education and research.

“Without these important codes the industry is largely undefined which has resulted in a poorly defined talent pipeline.”

RoboWest has lodged proposals with the relevant national bodies for codes to recognise robotics industry workers and students.

Lucey said about 1200 new skilled robotics and AI workers per year were coming from all current sources into the workforce in WA and all of those would be snapped up by resources companies over the next 10 years. “Elsewhere around the world [demand for skilled people is coming from] transport, but here in WA it’s mining. That’s because there wouldn’t be a major company out there now that’s building a mine for the future that will not be absolutely reliant from a profitability perspective on automation and robotics and AI,” he said.

But up to 30,000 people could find jobs in the automation and related data science fields in that time if enough skilled workers are available, he believes. Doubling the projected size of the skilled worker pool would create capacity for new industry development, and economies of scale across education, training and commercial channels, as well as relieving labour cost pressures in resources.

Meanwhile, RoboWest and iMove, a national research agency focused on robotic road vehicles and their potential to help cut the estimated 1200 car-accident fatalities a year caused by human error, plan to establish dual public-road “testing pathways” around the Edith Cowan University campus at Joondalup to “build confidence with the various government bodies” and alleviate political discomfort around robotic transport.

Lucey thinks the range of steps required to build the profile and stature of a robotics industry in WA can ultimately enlarge and extend the talent pipeline into lower schools. Naturally, he’d also like to see that accelerate.

“Our children need to learn about robotics, automation and AI,” he said.

“We talk about what other countries do in terms of K12 [primary and secondary] education – in South Korea you do two hours a week at primary school in AI and robotics. You wouldn’t do two hours per year here in that particular space at the moment.

“As soon as I started to wear my RoboWest hat school teachers started to ring me up and say, how can I get involved?

“Development of the curriculum, then taking it to the state school board, etc, takes a very long time. Because we want to do things now I’m suggesting we create a feeder school system of schools within the general area of the [new] precinct, which will at least help us in the next 10 years as we expand the rest of WA into that process.

“This is not rocket science; this is what other places do. Places in Pittsburgh and Columbus [in the US], for example, do this quite well. Following what other people do successfully is a good way to start.

“But we need to be proactive.”