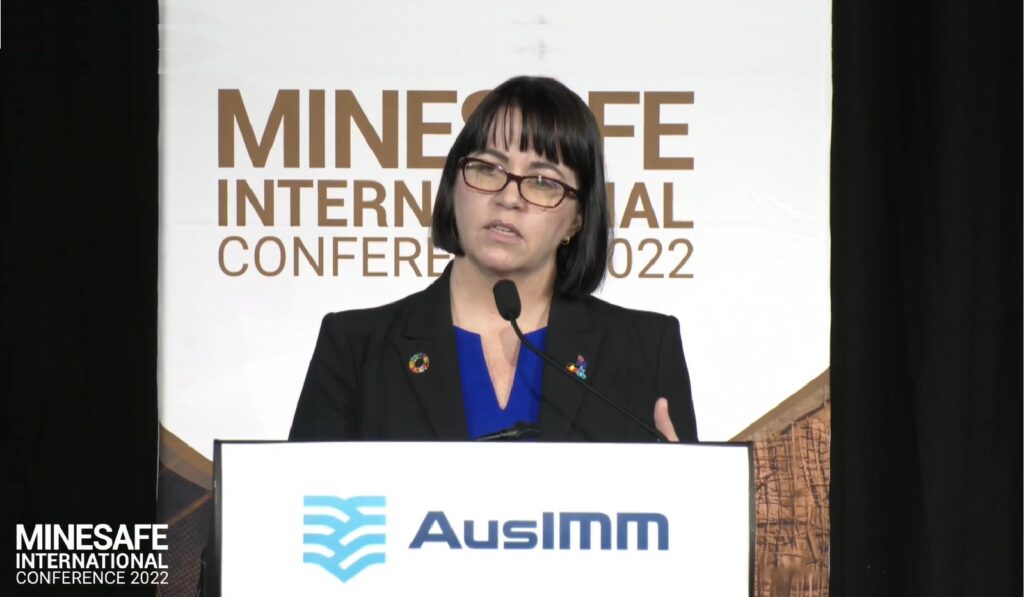 Australia’s mining industry, including suppliers, has invested heavily in technology and better practices to make people a lot physically safer, statistically, than they were 25 years ago. Why then do recent surveys indicate that so many people in the industry don’t “feel safe” in the workplace?

A related question various mine health and safety experts tried to address at this year’s Minesafe International Conference in Perth, Western Australia, was, how can actions to improve peoples’ sense of well-being and security, not just physical but mental, help drive the industry’s push to be as safe as it can be in an era of faster technological change and increased competition for workers and leaders?

“As automation on sites increases we know that driving a truck safely will be easier than it’s ever been before. What we need and what we don’t have is the ability to look at concentration, attention, judgment, deep thinking,” Peta Slocombe, a psychologist of nearly 30 years and CEO of Perth-based Performance Story, said at the conference.

“That will be the human component of safety in the future.”

Slocombe believes the paradox at the heart of mining’s safety challenge means it could be as well positioned as any industry to become a leader in the way it addresses society’s “rising epidemic of mental health issues” – something she asserts with caveats.

“Mining has the capital, it has the resources, and it has the passion for keeping people safe, and when we couple that with it being one of the most performance-focused industries that I know … recognising that improving mental health improves performance, I think we can all agree that mining has a really significant opportunity to do mental health differently,” Slocombe said.

“You know and understand that the role of mental health has never been and will never be as critical as it is in safety presently.”

Slocombe, who has held leadership positions at a number of ASX companies including nearly 2.5 years at an Australian gold major, was among a procession of speakers at Minesafe who referenced recent industry surveys, inquiries and reports highlighting mining cultural issues in part reflecting wider sociological challenges and also problems germane to the industry that are undermining its attempts – in advanced mining countries such as Australia, at least – to establish a “zero-harm” baseline for operational safety.

University of Queensland professor David Cliff, who has spent more than three decades in mine safety research, regulation and management, said at the event this push had stalled in the past decade. “I think that we are recognising now more that it is not just the physical factors involved in … incidents, but the underlying factors,” he said. “It’s those complex factors we have to get our heads around, especially given that we put aggravating factors like big machines, complex systems and low manning levels – or personning levels, whatever the phrase is – on top of those things.

Conference host, the Australasian Institute of Mining and Metallurgy’s (AusIMM) latest survey of women among its circa-13,000 professional members found 70% of 550 respondents said bullying and 85% said gender inequality was common. Some 67% of female respondents said sexual harassment was common in the mining industry – more than double the proportion of male respondents.

“Enquiries at the company level and at the state level tell us that the situation regarding bullying and harassment is not acceptable or sustainable,” AusIMM president Dave Clark said at Minesafe.

“Some of the findings are really confronting.

“They reflect an industry where many go to work who unfortunately do not feel safe … and are not getting the support that they need to advance.”

Another veteran mining health and safety expert from Queensland, chief inspector of coal mines at Resources Safety and Health (RSHQ), Peter Newman, said the state’s Coal Mine Board of Inquiry into the Grosvenor underground coal-mine methane gas explosion in May 2020, that seriously injured five workers, contained extensive evidence of “compliance” breaches and 60-odd recommendations.

“A lot of them are around organisational culture,” Newman said in Perth.

“Yes, there is some technical stuff about black stuff and about gas, but there are some underlying messages.

“The explosion that occurred, and the gas exceedances that were occurring around the Queensland industry prior to that explosion, were seen as being normalised.

“It was the way things happened … Yes, we’ve had a gas exceedance: report it to the regulator, put some administrative controls in place and let’s get on with producing more coal.

“The same things that were happening with gas exceedances, where mine workers were reluctant to report because of fear of reprisal, the same issues exist in terms of sexual harassment because it takes a very courageous person to report that. And within our database we have very few confidential complaints. Is it happening in our industry? Absolutely.”

Hermann Fasching, RSHQ chief inspector of mines, said the earlier review by forensic engineer Dr Sean Brady of all fatal accidents in Queensland mines and quarries between 2000 and 2019 also made a “number of far-reaching recommendations” to the regulator and industry.

“One of those was to suggest to industry that it starts to adopt HRO [High Reliability Organisation] principles and behaviours in recognising that these events that are occurring have precursors and that the industry really needs to be able to detect these and have systems to be able to do that effectively,” Fasching said.

“The attributes of the HRO … all rely on the ability for people to speak with each other, communicate with each other, raise issues or concerns or problems that they are identifying, and they need to be able to feel safe to do that.

“You’ve got to have a psychologically safe workplace where people are feeling valued; they’re free to ask questions; they’re prepared to make mistakes because that’s not overly corrected. There is no reprisal, and there is diversity.

“So, from a pure safety point of view [we need to] increase the reporting; understand what’s happening. [But] unless you’ve got a culture where people feel safe to be able to do that, then those fundamental things don’t happen and that then flows into the broader mental health issues and how organisations function, and individuals feel.”

A report on findings from a survey of New South Wales’ 40,000 mine workers is expected to be published soon. Acting chief inspector with the NSW Mining, Exploration and Geoscience (MEG) arm of the Department of Regional NSW, Leigh Nicholls, said negative peer reporting outcomes were addressed in the survey.

“It’s not necessarily direct fears about loss of employment, it’s fears of reprisals,” he said.

“Of what they call in NSW truck therapy, where you’re an excavator operator and all of a sudden you get put on a different job which is just driving a truck for three months. And it’s those reprisals … that drive that fear of reporting.

“We wanted to see whether it’s actually real, or perceived.

“It’s real within NSW and it’s triggered us … to take the next steps to actually understand the levels of the problems.

“If people don’t report things how can you fix them?”

Slocombe said: “One of the challenges that mining has is the hierarchical, high-tradition, traditionally patriarchal culture. At the end of the day any industry that is labour-focused, that has been based on strength as productivity, is going to struggle more with the concept of redefining what strength is.

“It’s compliance, it’s regulation, it’s designed to avoid disruption, and error margins, and I think that’s a really significant shift that we need to make … again, we need to redefine what intelligence is.”

Bobbie Foot, head of health, safety and environment for BHP Mitsubishi Alliance (BMA) in Brisbane, told the conference the company’s decision to push ahead with a new “a multi-pronged mental health … and psychological safety program” for BMA’s leaders, 10,000 workers, and contractors, around the outset of the COVID pandemic had been welcomed by the company’s leadership group.

“We’re on a journey with psychological safety,” she said. “We don’t claim to have arrived, and in fact it’s something we will be striving for over a long period of time.

“A culture of psychological safety is one … where we create a deliberately inclusive environment where people feel safe to belong. We make it safe to contribute by encouraging input and not just input that’s already comfortable; input that can be uncomfortable, or that is discussing some of the undiscussables. Enabling an environment of curiosity and innovation where it’s safe to learn and failure is an accepted part of the learning process.

“Many of us have had an experience of working in an environment of psychological danger.

“That old-school environment where any vulnerability is met with an admonishment to take a teaspoon of cement.

“Where people are afraid to show any weakness for fear of ridicule. There’s a culture of hierarchical and ego-driven leadership. And nobody wants to report anything.

“In this type of environment people will also hesitate before they raise a safety concern or issue.

“No-one raises new ideas even when there are recurring problems that everybody knows about. And you will commonly hear statements like, we’ve always done it this way.

“By contract, in a psychologically safe environment, leaders admit mistakes and seek to learn from their people. People will report issues and are actually empowered to make changes to solve some of those problems themselves. People are not afraid to report incidents and they know that they will be treated fairly if they do make a mistake. There are opportunities for everyone to give input – you’ll see that from risk assessments and investigations etc – and peoples’ experience is valued, not just based on a hierarchy.”

Asked if mental health issues were being “taken seriously” by regulators and the mining industry, Andrew Chaplyn, deputy director general at Western Australia’s Department of Mines, Industry Regulation and Safety, said Australia’s dominant mining state (by value of output) had introduced a code for “Mentally healthy workplaces for fly-in fly-out (FIFO) workers in the resources and construction sectors” back in 2016. But he conceded that, after several inquiries, “in some ways we’re still in the awareness stage”.

“Two of the [DMIRS] inspectors with us today are mental health and well-being inspectors,” he said. “Five years ago we didn’t have that capability within our team.”

Various government and industry speakers lauded the mining industry’s response to COVID in Australia, suggesting the level of workforce engagement, and flexibility, required to both maintain operations and also generally positive health and safety indicators, reflected a capacity to respond quickly and effectively in a crisis.

“I’ve got to take my hat off to the industry and how they reacted to the pandemic and putting in place the controls, very much from a cultural perspective, [and the level of] engagement with the workforce,” Newman said.

“For such a change in the industry that those controls required the number of coal mine worker complaints coming into the inspectorate were few and far between.

“If that energy was put into the mental health issues in our industry we’d have a different outcome.”