Miners urged to get moving on interoperability 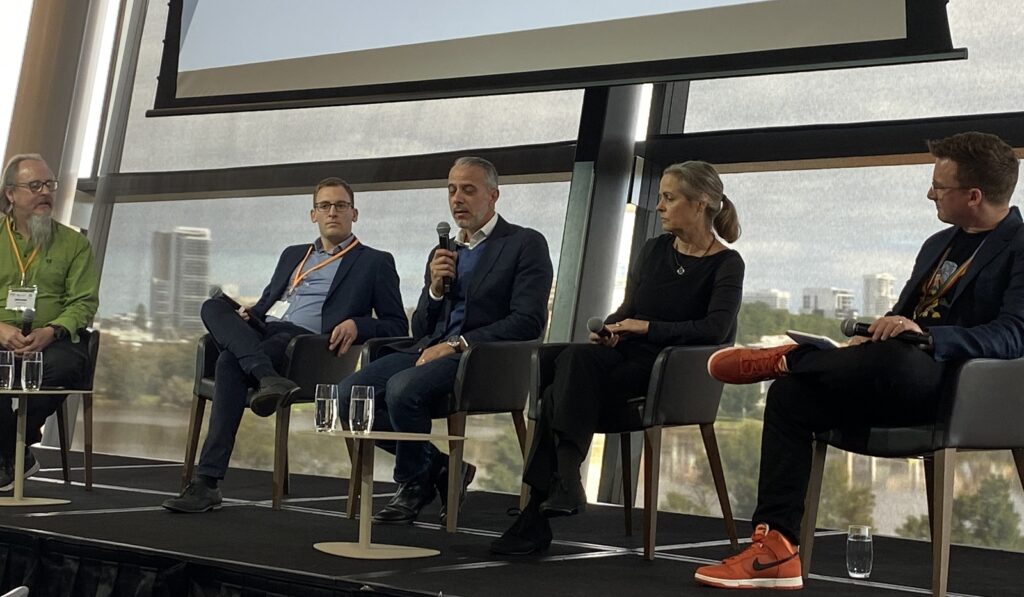 Viewpoint
Top image :
At the GMG Austmine forum (from right to left): Alex Bertram, Melinda Hodkiewicz, Joe Zappia, Carl Faulkner and Andrew Scott
‘We are different, but not that different’

Mining’s need for basic communication protocols, or standards, to ensure the connectedness of core planning and operating systems is becoming more urgent, a major industry forum in Perth, Western Australia, has heard. “The interoperability world is moving fast outside mining and we need to get engaged … and be a player not a passenger,” the event heard.

That call came from University of WA professor Melinda Hodkiewicz, whose connection with mining in various operations, maintenance and academic roles goes back more than 35 years. She has been the BHP fellow for engineering for remote operations at UWA since 2015 and recently joined a Standards Australia group charged with advancing ‘universal’ industrial data management, automation systems and integration standards.

The industrial protocols needed to incorporate the “language” of miners but didn’t necessarily have to be “reinvented” to achieve this as some of the circa-700 existing, relevant global standards might be adopted, the forum heard. However, speeding up delivery of what is seen by many as a vital enabler of mining’s Industry 4.0 transition required far more concerted and collaborative input from the industry than what had been seen to date.

“We’re not the only people in the world to have X number of MES [manufacturing execution systems] that don’t talk to each other,” Hodkiewicz, a highly respected figure in the industry, said at the GMG Austmine Forum.

“There are other sectors with this problem.

“We are different, but not that different.”

Hodkiewicz said as major users of capital-intensive fixed and mobile machinery that was increasingly being automated, miners needed to be more directly involved in formulating and refining standards that governed safe and effective use of the assets. Australia was a “middle power” in a standards world she suggested was controlled by manufacturers in Asia, Europe and North America. “Their interests as manufacturers are not necessarily our interests as integrators”, she said.

“We have vastly complex IROC [integrated remote operations centre] systems, we have the world’s biggest robots and do automation of trucks better than anyone else,” Hodkiewicz said, imploring “everyone in this room” to add weight, potentially in the form of submissions, that could help shape future industrial protocols.

“We have something to offer, but we need to get engaged and be a player, not a passenger,” she said.

“Delay is just a killer. Time is money in this industry like any other industry and the interoperability challenge [can be seen in] the amount of time we manhandle things; the human in the loop of so much of our data processing is killing us.

“In my area of maintenance, to take one work order from a noti [notification generated in the event of an equipment issue] all the way through to execution usually has to go through six people.

“Some of this stuff is repeat stuff like some standard work order, but it still needs to go through four people.

“As an industry we have to evolve.

“I think we should be taking a much more risk-based approach to interoperability: what are the risks of not moving forward? Because opportunities are hard to quantify [but] risks are usually a lot easier.”

The conference hosted by the Canadian-based Global Mining Guidelines Group and Australia’s Austmine heard that mining’s traditional separation of geology, mining, mineral processing and related infrastructure components, and the technical tools – from software to process control and sophisticated geospatially-driven fleet management systems (FMS) – used to improve performance, continued to put the brakes on not only better financial returns but also the industry’s ability to respond to changing technology, social and market forces.

“We’ve got a fragmented landscape across [our] value chain and that’s kind of by design,” said Joe Zappia, Australia and New Zealand energy and mining lead for Amazon. Zappia spent more than 13 years at BHP and South32 in project management roles.

“We’ve designed it that way over decades, so … we’ve got what we actually meant to achieve.

“But we’re now moving into this world where high-performance [computing] and the ubiquity of data … are changing our understanding of the value of connecting what we ordinarily would see as being disconnected or disparate datasets.

“If we can start to demonstrate interoperability in a part of the value chain, whether that’s an FMS or a material tracking system, or mine planning system, how those things could talk to each other, or connect to each other, not physically but through data, then that could be the point where people start to say, okay, I think I get it now.

“My own view is that there is a sense of urgency which the industry doesn’t get.”

While an industry veteran in the audience suggested this might be because digital technology, and connecting digital technology, didn’t “move rocks, and mining is about moving rocks”, Zappia indicated the shift wasn’t being driven by “the physical movement of rocks”.

“That’s actually not the thing that we should be interested in.

“Everyone in this room will know the trends and the challenges that mining companies face today that they’ve never faced before. There is a greater scrutiny of mining companies today around social value and expectations of how to behave in the community that [weren’t there] 10-to-15 years ago.

“Why is that even part of the conversation?

“My view is that [miners] have to become far more transparent in how they operate … and for the most part that will require a deeper understanding of their business which should come from, and could come from, the lowest common denominator which is date of the data capture and how they use that to make decisions at a [shift-to-shift] level and at executive level.

“Data is the new oil is what we’ve heard [at this conference]. I believe that.

“Having sat in mining companies for most of my life trying to make operational decisions, project decisions, fast, with [limited] data, and trying to drive insights from that; thinking, shit, am I making the right decision? And just kind of going with your gut.

“My sense is that those days are over.

“It is difficult, I acknowledge, for all of the players – the operators, the tech providers, the software vendors, to play together. We’ve got a challenge, you can look at it that way, but we’ve also got an enormous opportunity to really move the dial, and fast.”

Ex-BHP manager Alex Bertram, now working independently as an industry advisor after 14 years at the major, said a three-year BHP project that created the company’s proprietary Dash Tools – giving field maintenance personnel live equipment diagnostics via a tablet or smartphone and keeping them away from massive running machines – was conceived, delivered and scaled globally, relatively quickly, on the back of mining’s biggest equipment makers agreeing to “collaborate on IP”.

“The safety case was the thing that got the doors open,” Bertram said at the forum.

“That got us past, largely, the commercially driven discussion into, how do we get the right technologists to sit next to each other and solve the problem?

“But to get the doors open to the point where Caterpillar and Komatsu, and Epiroc as well, are trialling this at their proving grounds and now providing a gateway that we’re able to integrate with … [was] driven by the safety case.”

Similar urgency existed around the need for standard autonomous and semi-autonomous vehicle “geofencing” communication protocols. Bertram highlighted 2021 International Council on Mining and Metals data that showed the leading cause of fatalities among member companies – including most of the world’s largest miners – was vehicle-to-vehicle interaction.

He remains optimistic that available technology, and technology integration, can play a major role in shifting the industry’s safety, social, environmental and operational performance markers, but says commercial realities meant a holistic move will happen one piece, or Dash-type project, at a time.

“We don’t have a deficit of available technology within our industry or from others,” Bertram said.

“We have a lack of ability to execute.

“I think part of that is the barriers caused by lack of interoperability which we need to address. But if we don’t start to execute and show the benefits [of that delivery of individual projects] we’re not going to get the interest and support for doing all of the good enabling work that needs to be done.

“Standards absolutely are something that are required to get to that Nirvana view of interconnected visibility across supply chain [but] why should businesses care about those things?

“I have a view that it comes down to time to value, to actually being able to improve things, whether that’s point solutions or whole supply chain.

“Those point solutions, if framed correctly, demonstrate the connection and the importance of interoperability using real-world things, actually solving problems for the operations.

“If we don’t … frame it in the language of the business, and keep it at a kind of abstract level – we need to solve everything before we do anything – I don’t think we’ll move. We won’t get the attention on standards and participation at the right level … that we need to really get the benefit from those standards.”