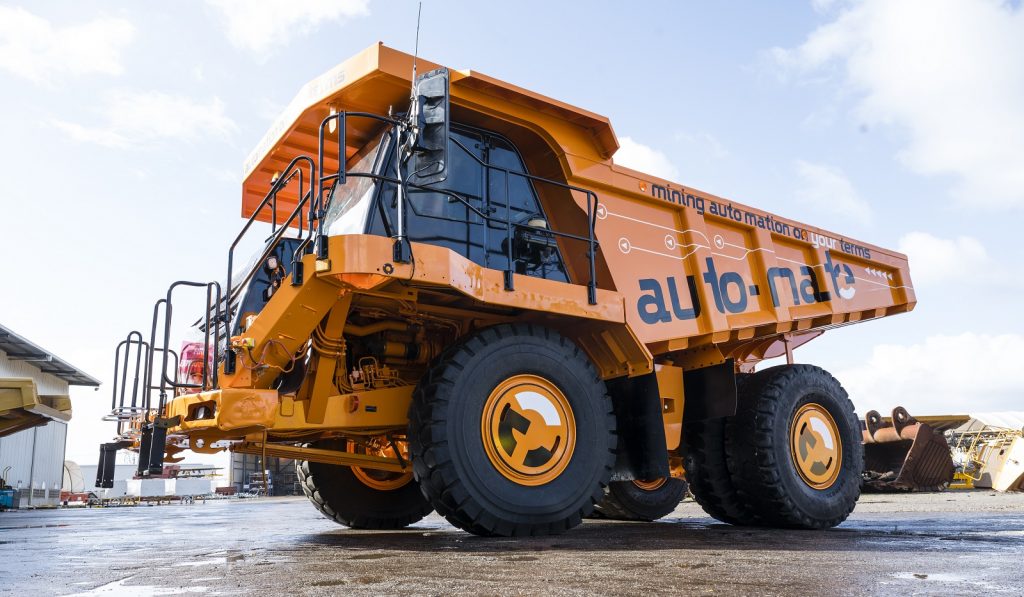 Partner Content
Top image :
Auto-mate's 'Agile Audrey' ... coming soon to a mine near you
‘The emerging industry version of open and advanced autonomy is really quite important’

Ask the many players actively involved in mining’s push into the Autonomy 2.0 era about what is going to speed progress, given the 15 or so years that have elapsed since the commercial introduction of first-generation automated vehicles, and it’s pretty clear there is no one answer. That’s a significant departure, at the outset, from the Autonomy 1.0 ‘journey’.

Others point to a wider confluence of pressures on mining’s access to key inputs, from water and energy, to people and money, feeding into the strategic planning of large and small miners, contractors, and a bevy of other players.

There are social, regulatory and internal forces intensifying those stresses, and the industry’s focus on efficiency rather than just scale.

There is the inherent volatility in labour, consumable, energy and other markets tied to current standard operating procedures.

There are advances in technology and the opportunities – and challenges – they bring.

Former BHP manager Alex Bertram, who led automation and digital projects during his 14 years with the mining giant, believes higher levels of mobile fleet autonomy will underpin a shift to more efficient, more selective mining practices. “I think the – hopefully positive – disruption will start to come from an increasing focus on the carbon content of materials we supply to end-users, particularly in the battery minerals space initially, but more broadly thereafter,” he says. “We have great big machines moving 100-to-1 or more [ratio] dirt-to-minerals … I think we need to change that base equation if we’re going to get to a zero emissions future. Whether that change in approach comes from inside the industry, or from outside, we’ll see.”

Teck is a Canadian mining heavyweight with 11 metals and metallurgical coal operations in North and South America.

Ruberg said from Vancouver that current “rules-based” automation in mines was a stepping stone to “full autonomy” which he believes will not only underpin the industry’s zero-entry mining shift but also drive levels of operating and energy efficiency that can currently only be modelled.

“If we look at level five autonomy it is machine-learning based and really fully autonomous,” Ruberg told the forum.

“It’s not rule based. There are no autonomous zones and site aware vehicles. The edge computing is really based on the vehicle itself.

“The strategic implications are that there is an open architecture that … allows for automated haul system expansion into complex and mixed fleet environments. And that’s really important because certainly at Teck most of our mines are mixed fleet and we’re ending up with very many not only dispatch systems but control systems for these trucks as well as data collection systems that don’t allow us to really operate them in a fully optimised manner.

“Why level five is important when one begins to consider decarbonisation [of mobile mine fleets] and when one looks at different kinds of capabilities – for example, the ability to match very large shovel buckets to smaller trucks – is that there are going to be potentially very, very many small machines. And you literally can’t have human drivers in 250 machines, displacing 70 current ultra-class trucks.

“As a result, you get bunching [of vehicles] … You have queues forming in unpredictable places … and where you have shovel and truck interactions these are points of friction. And they can cause the whole system to degrade in terms of performance.

“With level 5 full autonomy … the vehicle can behave in a normative way that is different, perhaps, to the next one. It can make its own decision about where it goes and when it wants to go, all within prescribed safety parameters.

“That really forms the basis of swarm mining.

“So the emerging industry version of open and advanced autonomy is really quite important.”

In Western Australia, which has seen the biggest and most successful deployment of automated surface haul trucks and production drills of any mining region in the world over the past decade and a half, in large-scale iron ore mines, impetus is now building around level 4 and 5 autonomous-vehicle deployments and the creation of a different auto-mining technology and support ecosystem.

MACA general manager technology, estimating and technical services, Shane Clark, recently gave an indepth background presentation on the benefits the mining contractor saw in “AI supported Autonomy 2.0”, versus the previous generation of autonomous equipment introduced in the state. MACA’s circa-six-to-seven-year automation journey reached a key milestone earlier this year when the company deployed a Hitachi EH3500 haul truck at a new gold mine in north-west WA that Clark described as “the first autonomous 2.0 vehicle in existence” – certainly the first mine truck in WA.

MACA is a mining contractor which cut its teeth in the highly competitive WA gold sector.

Clark said cumulative benefits of the Pilbara’s Autonomy 1.0 rollout – including up to 15% lower operating costs and significantly improved fleet utilisation, productivity and equipment life – could be magnified in the Autonomy 2.0 era.

However, he said the significantly cheaper (MACA estimates 75% less upfront capital per vehicle and a “fraction of the network infrastructure spend” of Autonomy 1.0 systems), more flexible and “agnostic” attributes of Autonomy 2.0 were the real keys to unlocking myriad applications for the technology outside of the mega-scale operations in tier-one iron ore and copper mines.

According to Alex Bertram, that opens up a different view of the future.

“The current generation of autonomy that’s been deployed across large haul trucks and machines is still relatively constrained in terms of the way it operates, [with] centralised command and control that instructs, or remotely operates, machines that then have a huge amount of investment in collision avoidance put into them,” he says.

“That’s where we’re at today.

“That’s much better than where we were in 2006, but that’s where we are today.

“When you look at what the OTM [original technology manufacturers] folk are bringing, they’re bringing truly autonomous machines and talking about providing an operating platform that allows you to deploy applications to the edge and do that in a way that’s relatively low friction. It’s easy to deploy and change and use, just as it is an app on your phone.

“That’s the polar opposite end of the spectrum to where we are today.

“If we want to make a change to a piece of software on a machine today, you can measure that deployment time in months, maybe years, versus minutes and hours, which is what we are hearing about now.

“I think that next generation of autonomy will bring a lot more flexibility to how we mine.”

As with the protracted introduction and full commercialisation of Autonomy 1.0 in mines, successful Autonomy 2.0 deployments are going to be paramount to the rapid acceptance and uptake of the technology, according to Auto-mate CEO Daniel Poller.

Poller, in the second part of this series, says a vibrant and diverse supplier base is also going to be important to the hoped-for speedy transition to Autonomy 2.0.

“We can see a lot of demand coming,” he says. “At the moment, with all of the relatively new OTMs in the market, there is not huge capacity to meet that demand.

“We need to scale up, and we probably need to do it fairly quickly.”

Up next: OTMs to lead mining’s new era of automation