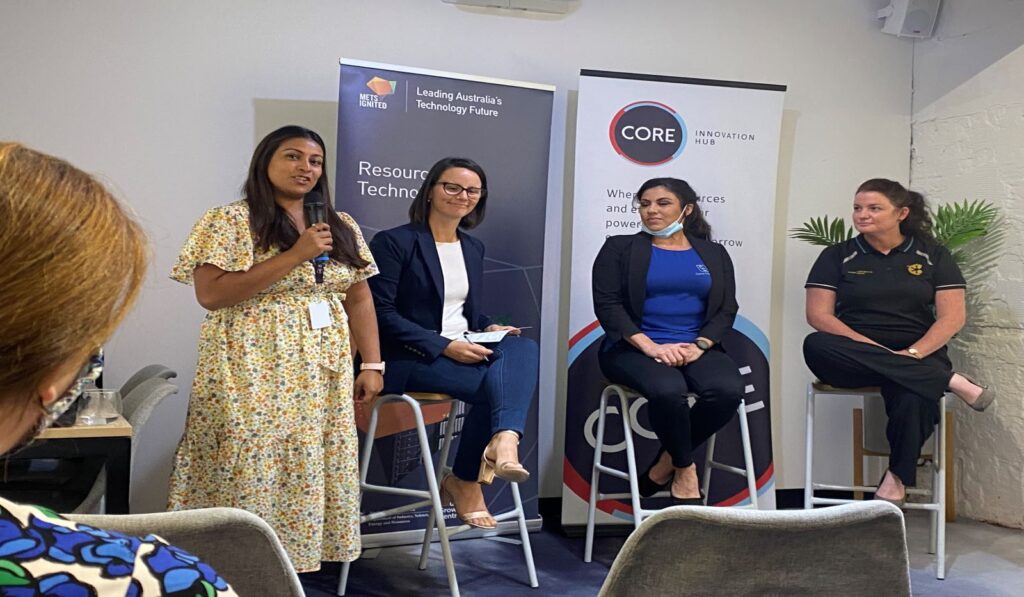 Industry data suggests women business leaders are still few and far between in mining supply land, but two who are succeeding in Australia are encouraging more women to enter the fray. Camp Connect’s Erin Bell and Chameleon Mettle Group’s Peta Chirgwin say despite challenges, opportunities are mounting in the industry.

Australia has a large, highly competitive mining equipment, technology and services (METS) sector that is currently seeing a surge in accelerator-program and venture capital funding.

It is also seeing more mining companies seek to engage with start-ups through various mechanisms.

Recognition that a sea of good ideas sit outside the walls many mining companies had constructed around their procurement departments is slowly turning into channels for increased engagement. There is still clearly a lot of ground to be made up, but Bell’s Camp Connect app and Chirgwin’s automation advisory services are just two examples of ‘products’ that probably wouldn’t have got market traction not so long ago.

Chirgwin, who has a mining automation PhD, told a CORE Innovation Hub Tech Talk lunch in Perth, Western Australia, wider application of automated and semi-automated machines and plant in mining was creating lots of challenges requiring solutions, and lots of opportunities.

“The challenges are all around people and organisational transformation for the future of work,” she said.

“You might have read a lot about the great resignation and that’s one thing we are trying to solve for. Mining companies in particular are having a hard time finding skilled employees that have relevant qualifications for technology and moving into the transformation into the digital world.”

Held to mark International Women’s Day, the CORE event’s presentation of two METS women founders and managing directors recognised ongoing challenges for women in the mining industry. The topic has had a particularly high public profile in Australia in the past 12 months through an inquiry into workplace harassment that featured some shocking BHP admissions, and a recent Rio Tinto report highlighting a “toxic” workplace culture for women.

“I think it’s important to shine a light on that [International Women’s Day] and force [higher levels of] corporate responsibility,” said Bell, who has worked in various health and safety roles in and around mining for a decade.

“Peer pressure [and] personal motivation is a big part of that. If a company sees people progressing, they are thinking, why aren’t we doing this? Break the bias [towards] what people can become but [also] bias on what [a] role actually looks like.”

Chirgwin, a circa-20-year mining industry veteran, is not a fan of  female board and other quotas – “there are opportunities for everyone” – but says it is important that the industry continues to work to break down inherent gender biases.

“There is unconscious bias that we put into our everyday lives that we teach our children without even realising it, so by the time you get into an organisation or workforce, we already have these biases,” she said.

“So, breaking the bias is, for me, key to really going in the right direction for people and partnerships.

“I would like to see that we don’t need International Women’s Day. I started as a cleaner and put my CV on an HR [human resources officer] desk every day and annoyed the hell out of her until nine months later they put me in a job where I could drive a truck.

“It would be so nice to celebrate people for their accomplishment, not for their sex. I’d like to be known as a leader, not as a female leader or female CEO.

“But we aren’t there yet. We still have a long way to go.”

According to industry body Austmine’s 2020 National METS Survey, just 12% of 619 survey respondents were female-led or owned. Kylah Morrison, panel moderator at the CORE event and general manager, WA and South Australia, with METS Ignited, cited a recent Business Insider report that indicated Australian start-up equity financing surpassed A$10 billion in 2022, three-times more than the year before. “Six in 10 male founders were highly confident about securing their next raise compared to one in 10 women female founders [being confident] about securing their next raise,” Morrison said.

Bell said: “You just have to look at Diggers and Dealers [annual Kalgoorlie mining conference]. It wasn’t the most female-friendly place in the past. I think that’s changing now, but it does [underline] the fact that a lot of people in the industry have mates and make mates’ deals, and there is still a lot of that boys’ club mentality [that’s] held a lot of women back from progressing previously or even getting into the industry.

“[Traditionally] you got in [to the mining industry] if you knew someone.

“I feel that’s still one of the big challenges.”

Other challenges for a start-up were arduous vendor processes and payment cycles, and funding for new enterprises.

“The funding issue is a pretty obvious one as only 3% of funding goes to female-owned or led businesses,” Bell said.

Chirgwin said she was lucky she had an existing network of industry connections which proved invaluable in securing her consulting work. Her main client is BHP, her previous employer.

“Without the contacts I would have had a lot of trouble getting some of the work that I’ve had,” she said.

Central to both Bell’s and Chirgwin’s development success has been support from CORE Innovation Hub, which started in 2016 and helps facilitate growth for energy and resources-based start-ups and SMEs.