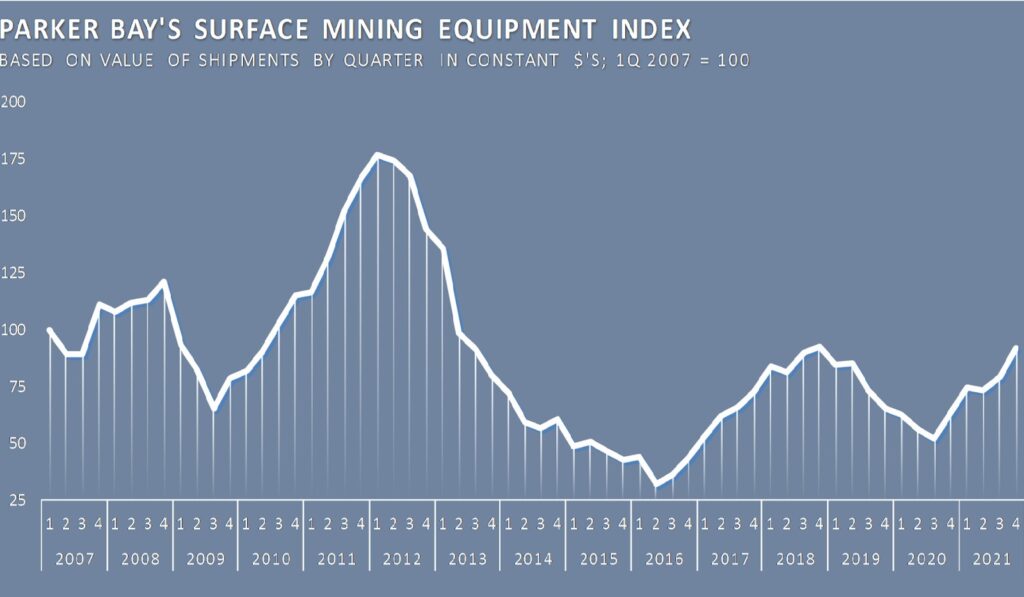 Mining heavy equipment spending surged in 2021 in the face of delivery delays and muted new project development activity, data compiled by The Parker Bay Company shows. More than 40% of the gear is still going to coal mines, but the buyer channels are changing.

Parker Bay, based in Pennsylvania, USA, said shipments of surface mining equipment it tracks topped US$7 billion for the first time since 2018, including $4.5 billion (2700 units) of large mining trucks, about $1 billion of hydraulic shovels and excavators, and $830 million of crawler and wheel dozers.

Overall shipments in the December quarter leapt an “impressive” 43% over the same three months in 2020, making 2021 “a better year than we anticipated just a few months ago”.

Parker Bay’s Surface Mining Equipment Index, based on the quarterly value of equipment shipments in constant USD, rose from 79.5 in Q3 to 92.3 in Q4. It remained well below the peak reached in 2012-13.

The 25-year-old researcher said Russia/CIS shipments more than doubled to $2 billion in 2021, accounting for nearly 30% of all 2021 shipments which is about two-times the region’s long-term share. Australasian shipments also nearly doubled and accounted for just under $2 billion.

“But this is consistent with the region’s long-term share,” Parker Bay said.

“Deliveries to Latin American mines increased by 37% over 2020 resulting in total value of $1.2 billion.

“The fourth largest region, North America, saw shipments decline by 5% when compared to full-year 2020. A similar decline of 3% was recorded for African miners.

“Coal mines remained the leading destination for equipment shipped in 2021 with a 42% share that is only slightly below its historical share. Underlying this aggregate are substantial shifts among countries with Russia, India and Indonesia continuing to increase coal production while the established mines in the US, Canada and Europe contracted in concert with broad efforts to decarbonise economic activity.”

Copper, gold and iron ore mines accounted for nearly half of all 2021 shipments, but the value of machines delivered to gold mines was 20% lower than in 2020.