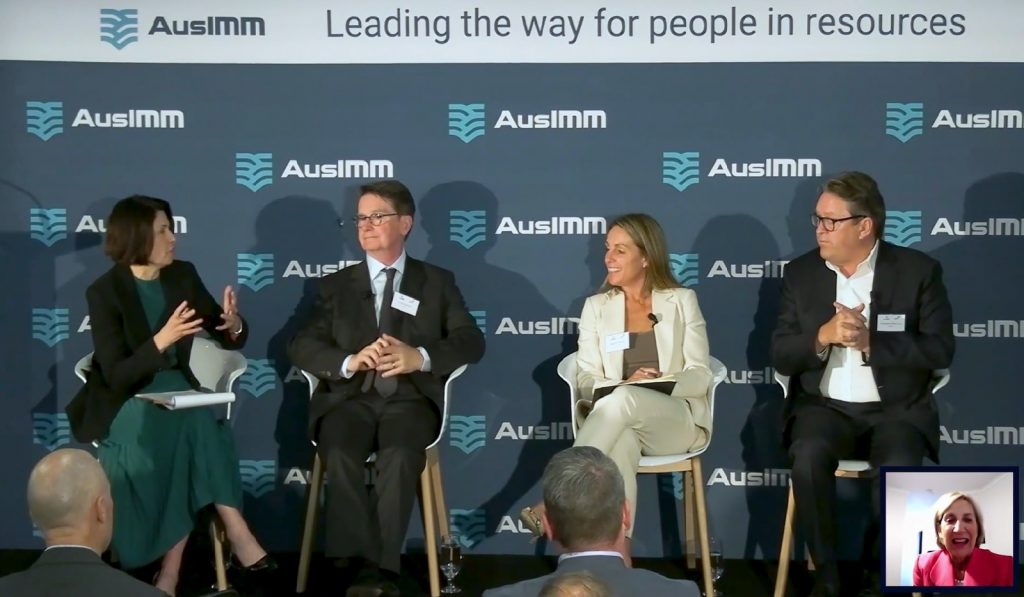 Pipeline, Viewpoint
Top image :
AusIMM critical minerals panel speakers Amanda Lacaze (inset) and (right to left) Chris Reed, Marnie Finlayson, Chris Vernon and moderator Megan McCracken,
‘There are big opportunities for us, but we do need to think about it differently’

Industry leaders at an AusIMM critical minerals event have backed calls for concerted efforts to be made to convert Australia’s valuable domestic resources into more value-added products, but have also warned against discounting important economic and social dividends that could come from smarter exploitation of the country’s strategic mineral endowment.

“[Australia’s former chief scientist] Alan Finkel said [in Canberra this month] that Australia has to stop treating mining like dirt. It should be thought of as a high-technology industry requiring skills in high demand.

“But the technology used in the world’s first intelligent mine [in WA’s Pilbara region] is clearly far more advanced than the processes in your standard silicon chip factory.

“As we think about going downstream … we need to be getting smarter and applying more technology to what we’re doing with our mineral endowment.”

ASX-listed Lynas, which has a current market value of about A$7 billion (US$4.7b), has a world-class rare earths deposit at Mt Weld in WA, the world’s largest RE separation plant in Malaysia and, under development, a new A$500 million RE processing facility at Kalgoorlie in WA.

“One of the problems with our more individualistic and entrepreneurial approach is, we let a thousand flowers bloom but it won’t necessarily get us to where we need to go quickly,” Lacaze said.

“There are big opportunities for us, but we do need to think about it differently from the approach that if everybody has a go, one or two of us are likely to be successful.

“The skills that are going to make us good in these smaller, more technical minerals are a little different from the skills which make us great at operating large mines. So we need to think about the areas where we need to apply our technology that can be shared. And that might be, for example, how do we use water better in WA, in particular; how do we use shared infrastructure?

“Let’s not worry about being mine to magnet [as in rare earths], let’s … focus on taking the first step so that we are de-risking the way that we’re seeking to grow. Doing it better is the first step. The second step is taking this … into an adjacent area.

Finlayson, managing director of Rio’s battery materials business, said talk of the need for 300-400 new mines to feed increased electric-vehicle battery and renewable-energy sector material demand, in the relatively near term, tended to fly in the face of evidence of recent new mine development rates and increasing obstacles in front of miners.

“Unless we’re actually working together on [new] technologies and collaborating together, this is not realistic,” she said.

As Rio’s Serbia country head and general manager at the Jadar lithium project for two years from 2018, she saw first-hand how governments and lobby groups could influence community sentiment.

The Serbian government cancelled Rio’s licences earlier this year. Rio had committed US$2.4 billion to mine development, to supply up to 90% of Europe’s current lithium needs.

Finlayson said the miner had failed to relay the “sustainability narrative” to stakeholders and the community.

“We weren’t quick enough to get the narrative out there to talk about the sustainability profile,” she said.

“The work that we’d done on just even the carbon footprint, we hadn’t spoken about it externally.

“We talked about the engineering pieces, but we hadn’t spoken in the language that would really resonate with the broader Serbian population.

“And then understanding the nuances of the countries that you operate in, particularly around election cycles, it was a really big impact for us and we lost control of the narrative and it became someone else’s narrative.

“And it’s very hard, particularly as a miner, to try and put all that back in because everything you say [is not believed].

“Mining isn’t sustainable in its essence because you don’t put it [metal] back. It doesn’t grow back. But how we can make it more sustainable is making sure that we have the best possible technology to extract as much as we possibly can with traditional mining techniques and processing.

“That’s going to be critical.”

The forum heard that better use of technology, less duplication of infrastructure and inefficient exploitation of mineral resources, and more effective communication of the “sustainability narrative” were all important to the industry’s efforts to draw and retain skilled labour in an increasingly competitive market.

“We need to approach this problem differently to how we’ve approached it in the past, which is you just need to shove more people through universities. There’s a lot of nuances in that … and we have to take into account the generations that we’re bringing through to come into the industry that are critical for our industry.”

Reed, managing director of Neometals, said, again, that the industry needed to be smarter than in the past.

“We’re fortunate we’ve got really, really good long-life assets that you can build a downstream industry around,” he said.

“But I’m trying to work out where the next lithium mines get all their staff from.

“We [industry] bastardise each other’s workforces. I talked to one guy, one mining CFO, the other day. He had three pay reviews during the year so his people didn’t leave, to try to keep his mine going.

“I mean, that is not an answer.

“Sure, prices are up, we’re all trying to make as much as we can. But you’ve got to think, you do need a critical mass to propagate and to do these things properly.”