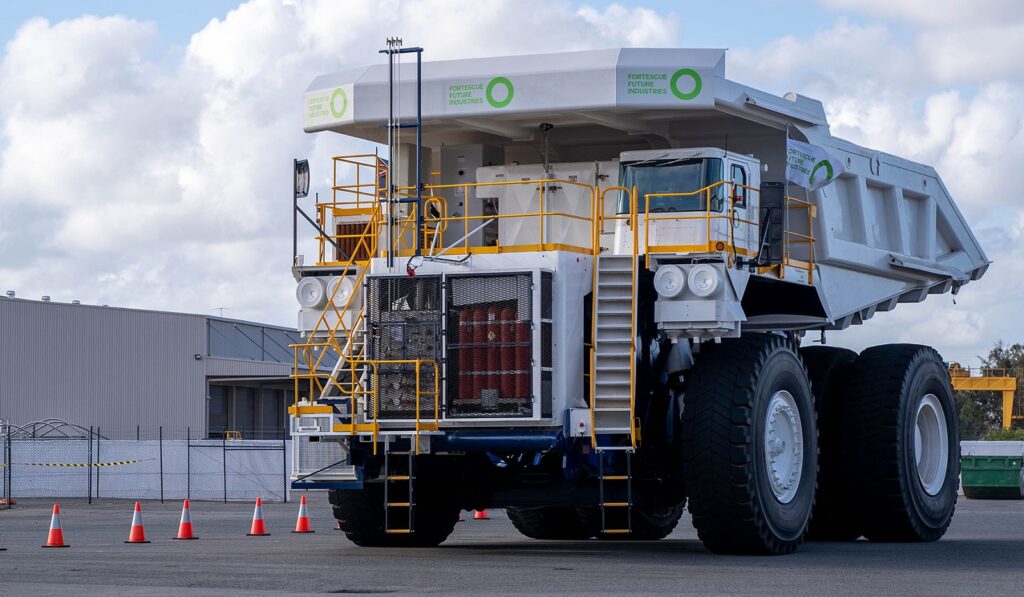 Australian iron ore miner Fortescue Metals Group will work with Germany’s Liebherr to transition to “a green mining fleet before 2030” at its Pilbara operations, with deliveries of Liebherr trucks with FMG proprietary power systems slated to start in 2025.

FMG has said it would buy 120 haul trucks from Liebherr, about 40% of its current fleet. The vehicles used circa-200 million litres of diesel fuel last year and accounted for 26% of its site-based CO2 emissions, the miner said.

A two-year joint development project would focus on integrating FMG’s power system – adapted from technology it gained from its US$220 million acquisition of Williams Advanced Engineering (WAE) earlier this year – with Liebherr battery electric truck and fuel cell electric trucks.

The Liebherr alliance was “a major step towards transitioning Fortescue’s diesel mining fleet to a green mining fleet before 2030 and accelerates the opportunity to commercialise zero emission power system technologies in heavy industry applications”.

In May this year global mining major Anglo American launched a 2MW hydrogen fuel cell (800kW) and battery (1200kW) powered 290t-payload mine truck in South Africa. It plans to start replacing its circa-400 global mine diesel-truck fleet with the new hybrid vehicles within two years.

It is also hatching plans to commercialise the proprietary power system.

On social media, mining industry figures are suggesting mining “truck wars” have started, with traditional heavyweights Caterpillar and Komatsu developing their own technologies and vehicles to sell in a changed 2030-2040 market landscape.

“There is a lot going on here,” Project 412 and RoboWest boss Paul Lucey says.

“Battery versus hydrogen, OEM versus OEM and tech versus tech – it’s all here.

“Batteries on their own can’t get a truck through a shift; they are lucky to get them through one load. Hydrogen faces three battles. It’s expensive to make, expensive to install and it’s hardly a proven technology on this application. Enter the hybrid; it seems to be logical choice here. But don’t ever accuse mining of being a logical business otherwise we would have going down the semi-autonomous route before trying to do full autonomy.

“Building a hybrid would allow all parties to reduce their emissions by between 20% to 60% whilst tech develops over the next 15 years so [why] aren’t people talking about it? Mostly because the life cycle of trucks is around 10 years and companies don’t want to invest in a transition technology.

“Some OEMs have a development cycle of around 15 years and considering most would have been looking at this for the last five years at least, 2030 seems a likely time for these to emerge on the market. Miners for their part are being very aggressive and want solutions now.

“So who will win?

“With Cat and Komatsu dominating the market they have the most to lose, so if they aren’t first, they need to be close behind and with products that work.

“History is on their side, but the game has changed slightly. I am not sure either OEM giant is going fast enough with their own glacial development process, which means they might take a leaf out of FMG’s book and partner on some quasi-JV models in the interim or lose their lunch.

“This seems more logical than a bunch of up-front acquisitions because you can try before you buy and you don’t screw up the company by trying to impart your culture upon it. In this space Cat might edge out Komatsu as [they are] more likely to do a JV or after-market solution.

“The second-tiers, such as Liebherr and Hitachi, will most certainly be in this game and clearly Liebherr is.”

“On batteries, assuming [manufacturers adopt] the next generation 4680 cells, while energy density improves by about 16%, their cycle life at mining truck loads … will be in the lowest end of the expected range,” he says.

“My first wild punt is $20 million per annum in battery replacements, not to mention the supply and waste issues. There will be a lot of fleet orchestration and optimisation required.”

“Most of the cryogenic equipment – tanks, fuel lines, etc – is rated to -260C so can also be used for liquid hydrogen,” he says.

“Caterpillar is trialling LNG on some 794 AC mine truck units in the Bowen Basin using their Dynamic Gas Blending system on the C-175 engines.”