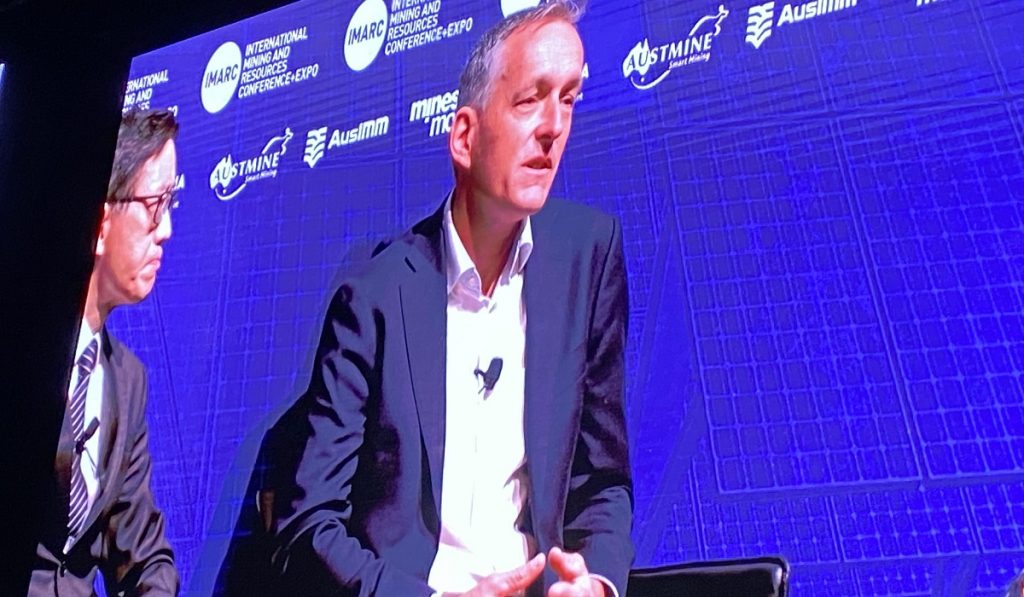 “Backs to the wall”, Worley’s Sue Brown said at the IMARC mining conference in Sydney this week, helped compress COVID vaccine conception from 10 years to one. She and a bunch of other mining leaders told the event a similar mindset could turn a raft of challenges in front of the industry into opportunities.

Brown, the ASX-listed engineering company’s executive group director sustainability, gave some insight into Princeton University research highlighting the magnitude of the task in front of “humanity” to build the infrastructure required to facilitate the world’s mooted energy and transport transition in the time currently allowed.

No small task, was the upshot.

But evidently not impossible.

“I think in recent times the development of the COVID-19 vaccine is actually a really great example of what is possible when you smash the prevailing paradigm,” Brown said.

“At the beginning of the pandemic we were being told that it takes 10 years to develop a vaccine of this type. We all thought, oh, my god, how are we going to survive? And then the sector that developed those vaccines … [started] sharing information in ways they never had before so that all the teams working on the different vaccine technology options could progress; not just one trying to get to the end. And we saw a compression of the timeframe from 10 years to one by radically rethinking [the solution].

“So when humanity’s back is to the wall, it’s extraordinary what we can do.

“We need to bring that kind of thinking and that kind of mentality into how do we develop the infrastructure that we need.”

Collaboration in mining was a consistent theme at this year’s IMARC, which drew more than 7800 delegates to Sydney.

“The value in collaboration is really solving problems that are bigger than any one company can solve themselves,” he said.

“And mining is facing some doozies at the moment.

“To be able to transition to a zero-carbon mine while still delivering sustainable and competitive service and while meeting our other environmental goals is a hell of a challenge that’s facing the industry.”

Brown (pictured below middle) said: “Let’s be under no illusion. We’re on the cusp of a significant and radical transformation of the global energy system, and we’re moving from a fuels-intensive energy system to a minerals-intensive energy system, so in no sector more than the mining sector is this incredibly important, and an incredibly exciting time. And the thing that strikes about the mining sector is that, on the one hand, the sector is currently a significant emitter and we heard some of those figures yesterday: scope 1 and 2 around 7% of global emissions. You factor in scope three and it’s at 28%.

“But then it is also the sector that is going to provide the very materials that will power this energy transition and the low-carbon technologies of the future.

“When you look at the pace and scale of what needs to happen to deliver on mid-century net zero, the way that we deliver projects needs to radically change and … the thing we see as a key enabler is collaboration. 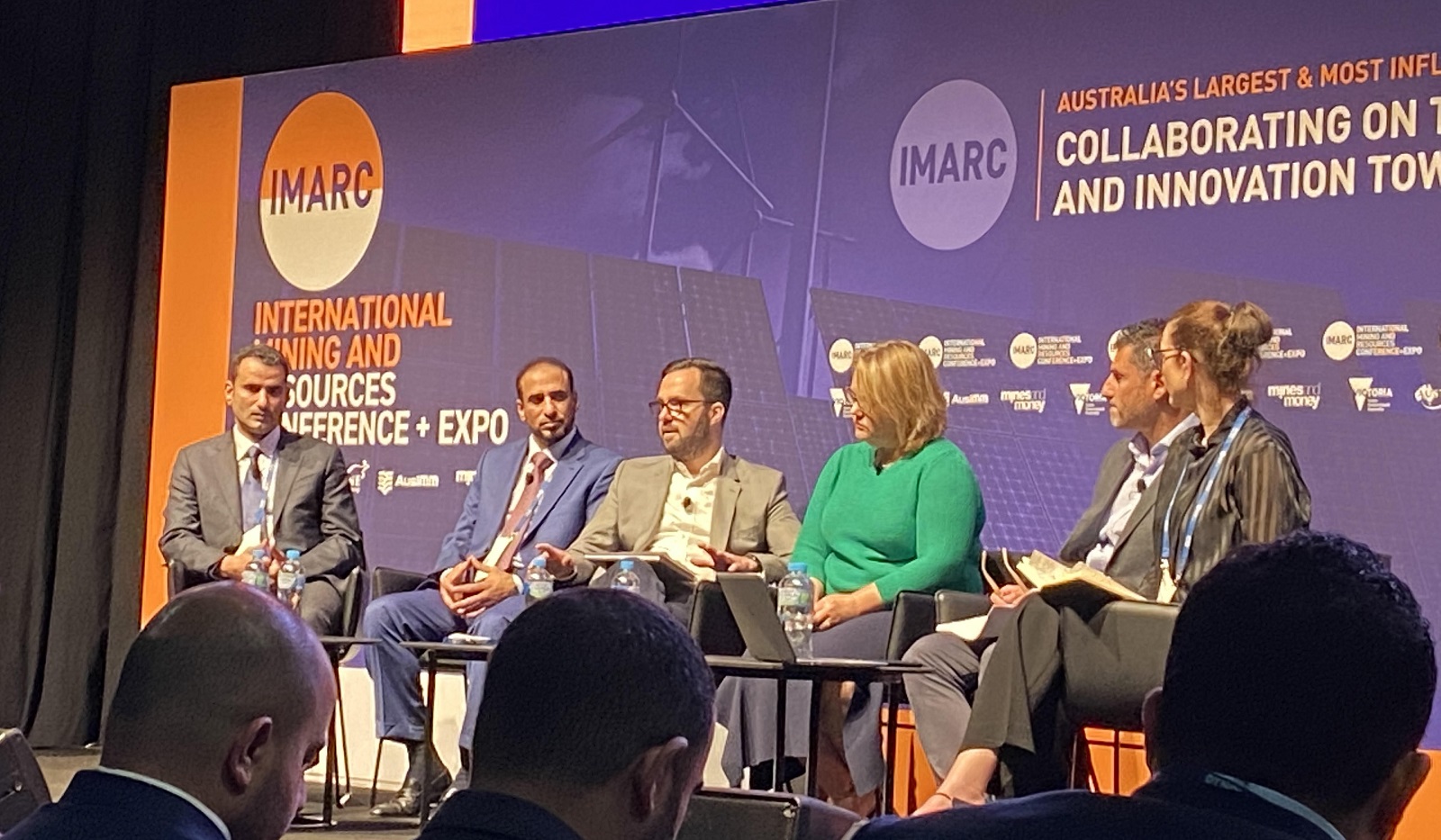 “We can’t afford to all be going it alone.”

While miners “don’t have a lot of muscle memory when it comes to collaboration”, one of Brown’s Worley colleagues, Nick Bell said at the forum, the industry is seeing outbreaks of co-operative exertion in key areas such as electric heavy vehicle development, other decarbonisation initiatives, tailings dams and safety.

It would need to see more concerted heavy lifting in areas ranging from education and recruitment, broader promotion and delivery of diversity in the workforce, water and land remediation, the event heard, to meet threats ranging in intensity from dire to existential.

Industry leaders are more frequently and openly conceding backs are close to walls in most if not all of these areas. “We are at the very least painted into a corner,” one said.

“This is not business as usual,” ABB process industries president,” Joachim Braun said in a discussion about faster adoption of digital technologies to speed mining’s efficiency journey. He said greater collaboration was urgently needed to help the industry and its vendors “get a grip on the challenges and what we need to do to move forward”.

“Then we can fall back into our typical competitive behaviour again,” he said.

Mining’s biggest opportunity lies at the heart of its major challenge, the forum heard.

“We’ve talked about an image problem, but … it’s really about trust.

“We’ve damaged the environment, we’ve been unsafe, we’ve bullied and harassed people. This is not my view, but this is the view of the broader community. We’re considered a cause of climate change rather than a solution.

“And to cap that all off, we’ll make you redundant in a downturn.

“In terms of people coming into the industry none of that’s particularly attractive.

“So we’ve got these kind of ever decreasing funnel of talent and we need to look at broadening the funnel out again.

“We’ve had incredible success at IGO just with connecting people to a really compelling purpose. As a senior person in the organisation it’s quite delightful to watch … these people that have a purpose to their work and are connected to what we’re doing for both, obviously, the company and shareholders, but also for society.”

Troy Hey, executive general manager corporate relations at MMG, said the industry was pushing hard, and often collaboratively, on a number of fronts to regain ground lost during COVID which constrained much direct contact with stakeholders.

“There are lots of really good joint initiatives with NGOs and others sitting at the table with governments, working together, and I think more and more of that will happen,” Hey said.

“So that work is great work and it’s underway and I think it is only accelerating and having multi-stakeholder groups involved, being able to get other voices in the room and have those discussions rather than industry just talking to industry, is really powerful.

“The second part of it is stakeholder relations [which] I always say is a contact sport. You don’t change peoples’ minds, you don’t move it, unless you’re actually getting out there. And COVID has been a disaster. During the years we haven’t been doing this, and I think it’s made life very hard.

“We don’t have branded products we don’t have a kind of presence in most peoples’ day-to-day lives. And what they do see is often carried in the media and is around acute problems or issues.

“We have to get that conversation going wherever we can get it going around what mining means and how it hits.

“This just transition to a low carbon economy is probably the greatest reputational repositioning opportunity the industry’s had.

“We are an industry that produces intensely carbon intensive products as well as being quite carbon-intensive in our production … but in the end, this industry will drive that decarbonised future.

“That’s a really fascinating conversation because as everyone has said, if you go and talk to those trying to get under-graduate mining students at the moment it is not even a conversation that is starting. The students are seeing a labour market that is buoyant, they’re making decisions on lifestyle and issues, and they’re walking away from mining in droves. It’s not just Australia either, this is across the world.

“But it’s a dialogue-driven process I think we all share in, bringing along the communities in which we’re in first and then the broader community. That is a real challenge. But I think there are great opportunities there. I was in London last week with the Global Mining [Guidelines] Group as part of London Metals Week and it felt different. For the first time you had different voices in a room talking about that just transition of metals driven future, and how the mining industry might change to drive that.

“And that’s a really positive thing.”