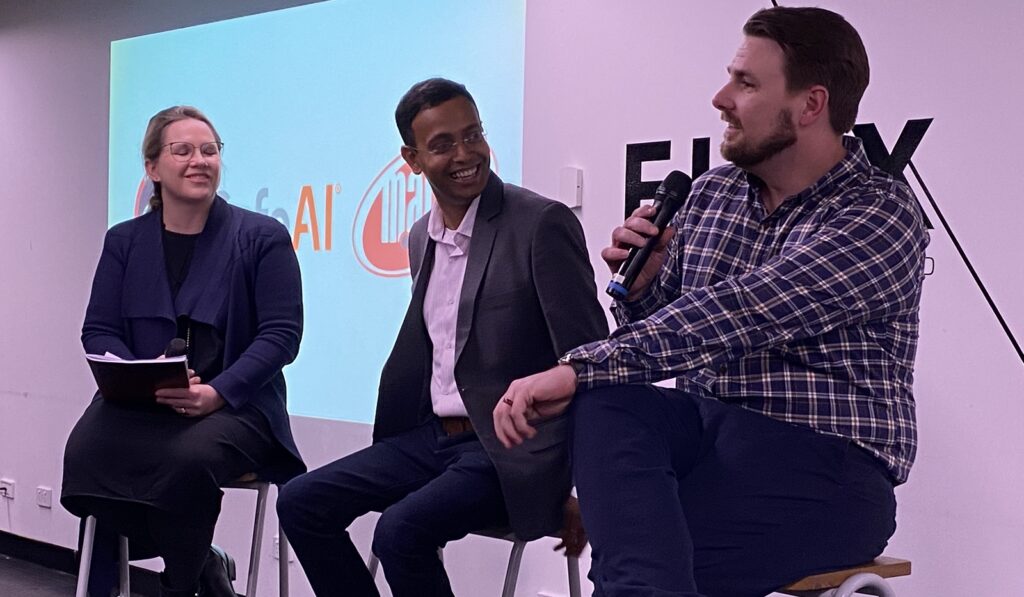 Leaders
Top image :
(Left to right) Tamryn Barker, Bibhrajit Halder and Shane Clark talk about the future of mining autonomy in Perth, Western Australia
‘The way we are looking at this autonomy solution is literally the way you look at an app in your iPhone’

Successful introduction of mining autonomy 2.0 by a contractor in the competitive Western Australian gold sector can be a watershed for the industry and perhaps a driver of significant wider commercial activity around robotics, information technology and “green” mining in the state, an industry event has heard.

“The moment we put the first truck in production … that’s when the clock will start,” SafeAI founder and CEO Bibhrajit Halder said at the latest Core Innovation Hub Core Connect Conversation Series event in Perth.

Core has just been confirmed by the WA Government as operator of the new Australian Automation and Robotics Precinct (AARP) being established north of Perth.

SafeAI and MACA announced in March this year they were formalising a longer-term collaboration, with the US company chosen to retrofit up to 100 MACA vehicles including equipment the contractor has working at Capricorn Metals’ Karlawinda surface gold mine in WA’s Pilbara region.

The region has seen billions of dollars invested in autonomy 1.0 mining fleets by some of the world’s largest iron ore producers. They and the equipment manufacturers that had delivered the most productive, safest autonomous iron ore haulage and drilling operations in the world had “set the stage up” for others, Halder said.

But Clark said the introduction of the next generation of heavy vehicle automation technology by a contractor that cut its teeth in the more demanding, more “dynamic” gold sector was significant.

“We could never make the numbers work for autonomy to translate into our space,” Clark said.

“Roughly it came out to be about 30% more expensive for us to embark on that. We’d been canvasing the industry for the best part of five years until we came across SafeAI.”

The evening Core Connect talks typically draw 40-50 people but at least 70 turned up to learn more about the MACA-SafeAI partnership, underlining industry interest in advanced robotics in evidence at other recent Perth events.

Mechanical engineer Halder was doing his PhD at Vanderbilt University in Tennessee when the US Department of Defense was setting up its first DARPA Grand Challenge, a race for robot vehicles in California’s Mojave Desert designed to inspire development of new technologies. “I got involved in that and my journey started from there,” Halder said. That journey being into heavy industry autonomy and AI. The Department of Defense put up US$2 million for the inaugural winner and no one came close to claiming it, but “that $2 million turned into a huge, huge industry today”, Halder said.

An estimated $80-90 billion has been invested in vehicle autonomy in the past decade and a half and while fully autonomous road vehicles could still be some way off, Halder thinks the mining and construction industries are near the front of the queue to profit from the massive spend.