No going back for Gold Fields in carbon battle 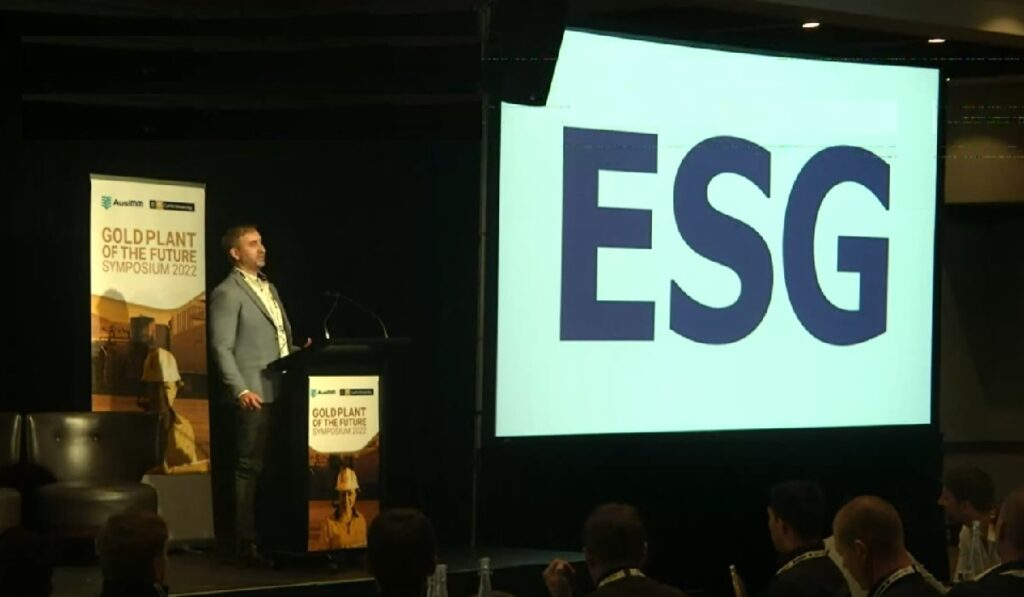 Up to A$210 million could be spent to decarbonise power supply to Gold Fields’ St Ives gold operation in Australia as the gold major steps up efforts to meet its 2030 scope 1 and 2 carbon emission reduction goals after going backwards in the past three years. The company has so far committed to A$1.5 billion of projects aimed at cutting emissions by 30% against a 2016 baseline, the AusIMM Gold Plant of the Future Symposium 2022 heard.

“It’s been said that it’s our largest capital pipeline of projects that we’ve committed to so far and it’s not mining-related, it’s emissions-related,” Gold Fields Australia’s energy manager, James Koerting, said at the symposium.

“One of our ESG pillars is now a $1.5 billion project pipeline, so it’s pretty significant to Gold Fields.”

Management recently reported the company’s highest scope 1 and 2 emission levels in the past five years, and a year-on-year increase in overall emissions to 2.26 million tonnes of CO2-equivalent. They remain committed to 2030 targets to reduce Gold Fields’ absolute carbon emissions by 50% by 2030, and by 30% against the 2016 baseline, as group attributable gold production grows from 2.3 million ounces to an estimated 2.8Moz over the period.

Gold Fields’ Australian operations, acquired and expanded over the past two decades, account for circa-40% of its group gold output. They’ve absorbed the bulk of its US$400m spend on “energy” projects, with significant new renewable and battery power and infrastructure developments commissioned at Agnew and Granny Smith, and a 12MW solar plant now being added at Gruyere.

“Granny Smith was commissioned in 2021. It was our first mine with solar power,” Koerting said.

“Agnew was the second project that we did, and we took our 9% renewable energy up to 54%. That 54% is a fraction as opposed to a penetration number, which a lot of people talk about. The fraction is the total energy generated over the 12-month period.

“So, 54% of Agnew’s comes from the wind and the solar, and the balance comes from gas.

“We get a lot of wind power overnight; we get the solar power during the day – only a small amount of solar power [overall] compared to the wind power, with the balance being made up with gas. The amount of renewable energy we generate is actually a lot more than what the mine consumes. We’ve over-installed on wind. And where that creates the opportunity for us in future is actually being able to store that energy and displace some of our gas-fired power.” 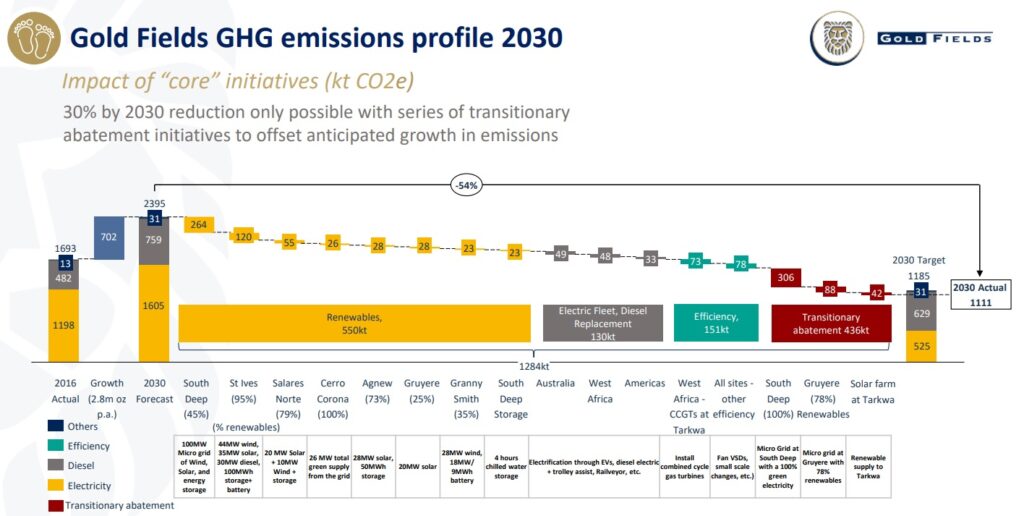 Under the 2030 plan, Gold Fields was to ratchet up the “clean” energy contribution at Agnew from 54% to 73%, “so we have more projects we need to execute at Agnew”. At the flagship St Ives operation south of Kalgoorlie-Boulder, the aim was to get to 95% renewable power generation.

“What it requires is probably 2-3 times the capital investment at the front-end. So our capital cost goes up but our operating costs go down. A huge amount of wind needs to be installed, a huge amount of solar needs to be installed, and some energy storage, as well as some other enabling technologies aside from the battery … to ensure the reliability of supply to the mill remains continuous.”

Research by the University of Western Australia has suggested annual global greenhouse gas (GHG) emissions from gold mining exceed 100 million tonnes, with the data collection for the research somewhat blindsided by China’s gold sector. The research highlighted the correlation between increased gold output and GHG given the sector’s energy-intensity and general reliance on carbon-intensive power. “The GHG emissions generated by gold producers are considered economic externalities in the absence of a carbon price being levied upon miners,” the authors said.

“Most of you are metallurgists and all your experience is in the gold plant, and the gold plant is already electrified. So the challenge is to change the supply of energy to the electricity that’s going into the process plant.

“Gold Fields’ mines here in Australia are all off-grid mines, connected to gas pipelines, so the mines here … are not geared to coal. There is a differential in the cost of abatement of a coal-fired electron versus a gas-fired electron.

“If you’ve got a diesel-fired power station on the surface that you’re using to charge the batteries of your underground mining fleet, you’re taking the particulates out of the mine but you’re not taking the diesel out of the mine. So the challenge is to electrify the equipment; electrify the plant … and decarbonise the supply.”

Koerting said of core energy sources available to sustain the gold industry’s energy transition, “hydro is a great source of energy but it’s not necessarily freely available – definitely not here in WA … [and] nuclear is impossible in Australia”. The importance of natural gas as a transitional fuel to support the renewable shift was evident in WA. The industry was “quite comfortable” with solar.

“In the last year wind has improved in the views of the mining companies,” Koerting said.

“We can now integrate wind into the mining supply and into the energy mix and it’s the variability of wind and the availability of wind – quite similar to solar – and then the integration of that into the power supply and how that can be reliable that is now starting to be much better understood.

“So we can see that wind is now on the agenda for mining companies as an energy source.

“Oil and diesel is on the way down, but not at a fast rate. A lot of that’s got to do with the availability of the mining equipment that we need, that does run on diesel.

“There was a big buzz around hydrogen and then when we went into the detail and found that it’s actually quite expensive. It’s going to take quite a bit of time before the supply chains that are going to supply the hydrogen equipment get built up.

“So the interest has dropped off but I think it will go up again in the future.”