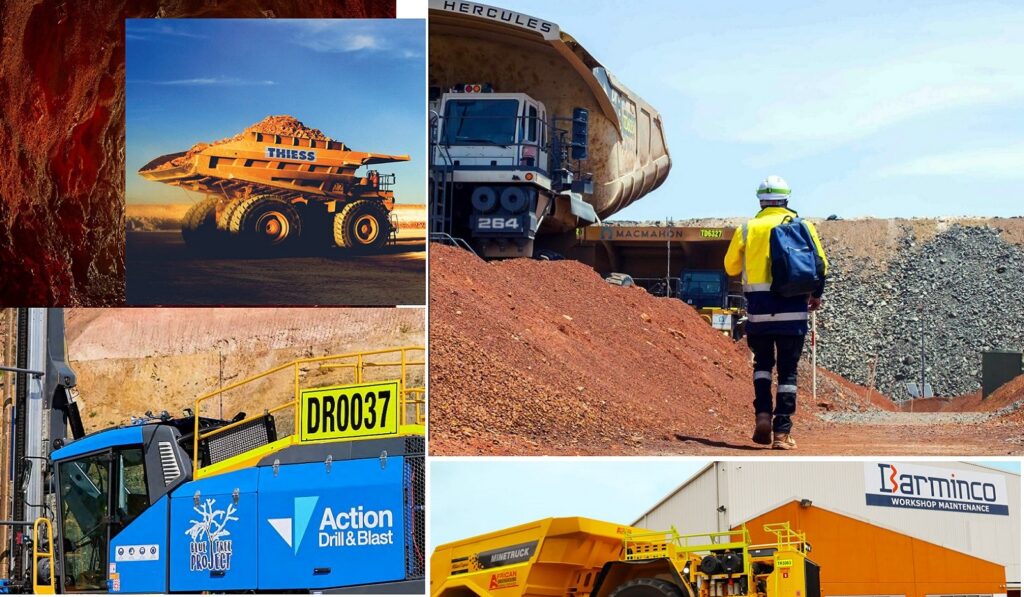 NRW and Macmahon grew their order books in the first half; Perenti was stable at about $5.7 billion after exiting the Sukari gold mine in Egypt. With Thiess, half-owned by ASX-listed CIMIC, the four big contractors have more than $20 billion of work in hand.

All accept NRW are chasing new work in international markets.

A Fitch Ratings report this week which reaffirmed Thiess’ BBB long-term debt rating under the joint ownership of PE group Elliott Management said thermal coal accounted for about 40% of Thiess’ work in hand. It expected the contractor’s funding cost to rise to reflect its “energy transition risk and a smaller funding base as financial institutions withdraw due to environmental, social and corporate governance issues”.

“The company has said it will diversify into new minerals, but the transition will take time,” Fitch said.

“Nevertheless, Thiess has an adequate EBITDA margin to absorb the increase in funding costs while maintaining conservative credit metrics.

“Fitch believes Thiess’ ability to generate positive free cash flow before dividends and the rising demand from mining activity across the globe will reduce its funding risk. We also believe Thiess’ enterprise value will be more than its outstanding debt, which will likely incentivise shareholders to provide support for refinancing, if necessary. However, failure to reduce its exposure to thermal coal over time may increase potential funding risk and pressure on its rating.”

Nearly 40% of the work Perenti sees in its $9.5 billion pipeline is in copper, lithium and nickel, with 50% in gold.

Macmahon reported FY21 H1 revenue of $809.7m, up 24% yoy, and EBITDA  of $138.7m, up 14% yoy. CEO Michael Finnegan indicated considerable new contract activity, including the ongoing ramp-up at Gwalia in Western Australia and Foxleigh in Queensland, mobilisation at Dawson South in Queensland and Fimiston in WA, and recruitment and start of mobilisation to Red 5’s King of the Hills openpit in WA had crimped margins and the company expected to “see our margins improve as these new projects move out of the start-up phase”.

Macmahon expects second half performance to be “stronger than its first half and maintains its underlying EBITA guidance of $95-105m” on higher revenue of $1.6-1.7 billion (compared with the previous guidance range of $1.4-1.50 billion).

Meanwhile, the company has more new project activity to contend with at the Warrawoona (surface) and King of the Hills underground gold projects in WA through March and April.

Perenti said after some “thorough forecasting” it had adjusted its FY22 revenue guidance range up from $2-2.2 billion to $2.2-2.4 billion. EBITA guidance remains unchanged at $165-185m “due to the expected continuation of labour and supply constraints impacting margins throughout FY22”.

“Labour has remained tight, supply chains have continued to see disruptions, and the impacts of COVID-19 have arguably worsened both domestically and internationally,” CEO Mark Norwell said.

“We expect the current macro-economic landscape to persist until the end of FY22 but remain confident in Perenti’s ability to continue to deliver on our commitments to our employees, our clients, our suppliers and our shareholders.”

Perenti won’t pay a dividend this year while its net debt leverage ratio remains above its target of 1x net debt to underlying EBITDA. Net debt rose to $522.5m in the first half, pushing the ratio out to 1.3x, even after Perenti pocketed $85.4m from the sale of its MinAnalytical assay business.

The company also said its FY22 H2 financial and operational performance was “expected to be stronger when compared to 1H22 as growth projects continue to ramp-up and deliver stronger earnings, including Zone 5, Iduapriem and Savannah”.

Perth securities firm Argonaut said in a report last month mining services companies were benefitting from strong resource sector tailwinds, with pre-production service providers such as drillers, engineering and construction firms faring better than mining contractors “at this stage of the cycle”.

“We are currently early in the mining cycle implying the demand from producers for contracting services is less intense than that from explorers and developers,” Argonaut said.

“Margins on some projects for capital intensive contractors are already too low in our view.

“[This] simply serves to highlight what we see as a near-term period of elevated risk. Looking further out we remain upbeat. There are strong tailwinds for miners and their contractors, and we are still early in the mining cycle in our view.

“Exploration metres drilled across Australia over the last two quarters was higher than at any time in the prior 25 years, with expenditure close to the record set early last decade.

“Exploration expenditure is a solid leading indicator of project development and its associated capex. We expect the upward trend in capex, labour and costs permitting, to extend as the highest level of exploration metres drilled in decades leads to positive investment decisions for projects still in feasibility.”