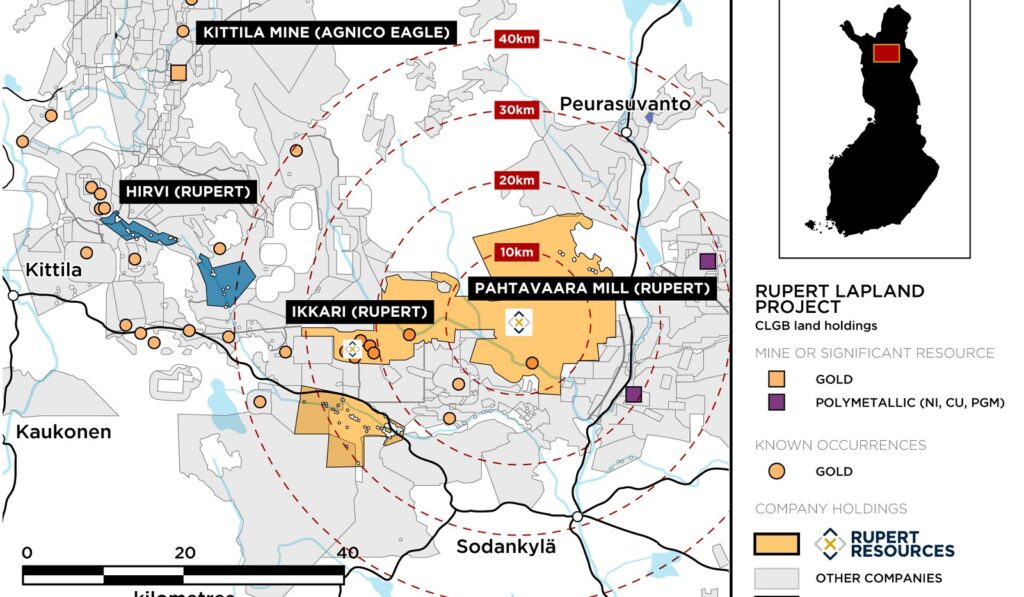 The Toronto Venture-exchange listed company also has its own permitted 500,000 tonnes per annum mill at Pahtavaara, plus underground mine infrastructure and a 474,000oz (4.6Mt grading 3.2gpt) NI 43-101 inferred resource. It made the Ikkari discovery about 20km west of the Pahtavaara plant in mid-2020 and has drilled 36,000m in 110 holes over 1.5 years to post the initial openpit and underground resource. The overall resource total varies on different cut-off grades, but 0.6gpt for openpit gives 2.51Moz at an average 2.6gpt while 1.2gpt for the underground estimate gives a 1.44Moz inferred resource grading an average 2.4gpt.

Rupert says no results for drilling below 450m vertical depth have been included in its “baseline resource” for Ikaari. Deepest intercepts from limited drilling so far into what is described as the central part of the deposit returned 38m grading 1.2gpt from 797m, including 8m of 3gpt from 825m, and new infill results reporting since the end of June this year have included 5.4gpt over 122.3m from 241.7m depth, including 16.9gpt over 11m from 286m, and 10.6gpt over 10m from 322m.

Management says recent drilling has extended Ikkari’s strike length to at least 800m and the resource remains open along strike and at depth. The company, which recently raised C$48.7 million (US$40.2m of equity funding to accelerate exploration in Finland, plans to complete a further 28,000m of drilling this year and about 62,000m to the end of next year, feeding into a planned resource update in mid-2022.

About 60% of the drilling will go into “upgrading and expanding the Ikkari resource”. The balance will go into regional work, mainly on targets around Ikkari, within Rupert’s 100%-owned 595sq.km tenure on the Central Lapland Greenstone Belt (CLGB) north of the Arctic Circle.

Rupert also wants to deliver a preliminary economic assessment on Ikkari in the middle of next year.

To the north, 14.9% Rupert owner Agnico Eagle has a big regional and near-mine exploration program going on around Kittila infrastructure, where it is spending €200m expanding the plant and building a 1044m-deep shaft to sustain higher annual production – 208,000oz in 2020 and circa-250,000oz from this year – on the back of 4Moz of current reserves grading an average 4.16gpt. Rupert points out Kittila mineralisation has been traced to about 2km vertical depth.

The company has budgeted for 65,000m of drilling at Kittila, including on the new Sisar Zone “mining horizon”, and 9500m “beyond the current mineral resource area”, plus 15,000m of diamond drilling on other regional trends.

Agnico Eagle backed Rupert’s latest capital raise at C$5.30 a share. The junior is currently trading at $5.33, up 48% in the past year, capitalising it at about C$930m.

It says infill and extensional drilling could produce a “grade uplift” as well as scale enhancement.

Rupert CEO James Withall said this week Ikkari’s “demonstrated size, grade, cohesive mineralisation and growth potential, combined with non-refractory metallurgy and proximity to infrastructure” positioned it globally as “one of the most high-quality advanced exploration-stage assets of recent years”.