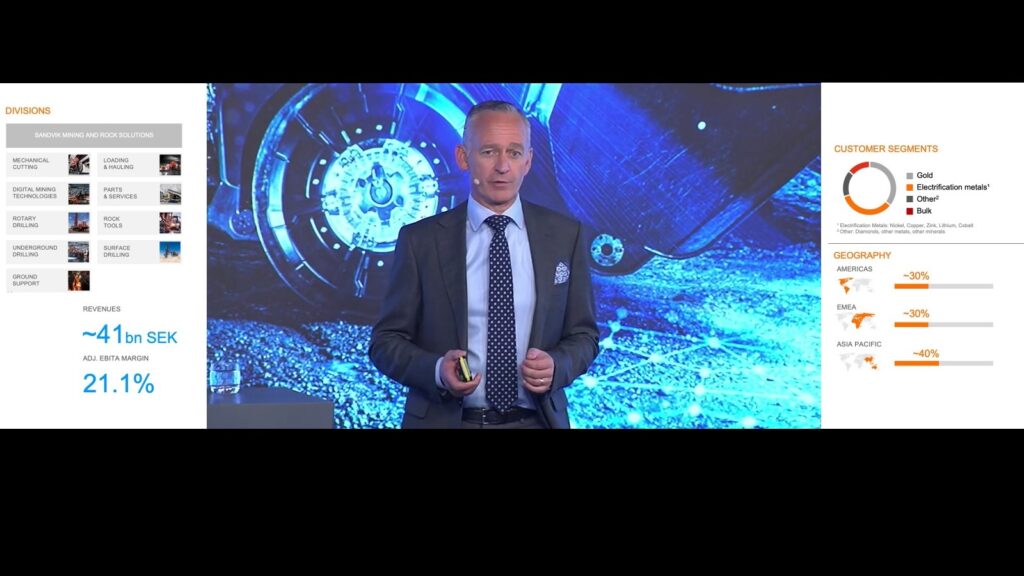 Sandvik and surface-mining counterpart Caterpillar provided some telling insights into the forces reshaping the global mining supply landscape this week at their respective investor briefings. The former was far readier to project into the future, though, saying it aimed to grow its mining business by more than 50% by 2025.

According to Henrik Ager, president of Sandvik’s mining and tunnelling mobile equipment arm, more than half the company’s underground mining truck, loader and drill sales are expected to be battery-electric vehicles (BEVs) by 2030. With assumed high take-up of the manufacturer’s battery-as-a-service (BaaS) offering in support of electric vehicles, this could nearly double the aftermarket potential of the business and expand the addressable market for its mining equipment and services by 60%.

By 2025, assuming forecasts for continuing steady growth in global mining investment hold, Sandvik believes it can build to circa-US$6.7 billion of sales in the sector – 52% higher than FY21 and 172% above its FY19 “baseline” level of $3.91b. That includes development of the company’s DSI ground support consumables position added last year and doubling of software and digital sales, from the 2021 level, in line with the group-wide target to lift revenue in that area to $650 million from $330m last year.

Mining, including part of the rock processing division sales, contributes about 40% of overall Sandvik revenues that totalled US$10.78b last year.

“A sustainability shift that we don’t so often talk about is a shift to underground,” Ager told a room full of analysts in Stockholm and others online.

Ager said mining customers would switch to BEVs because they could achieve faster cycle times, higher payloads and lower unit costs. Moreover, with increasing application of automation technologies and better mine planning, they would contribute to significant reductions in mine ventilation costs and further reduce worker exposure to hazards.

Ager believes Sandvik can demonstrate advantages of BEVs over its traditional diesel equipment over the next few years and says increased factory volume will dial back pricing over time.

“By 2025 we will have a very strong offering in load and haul, and battery-electric underground drills for every application,” he said.

“Give it 2-3 years and I think it will be a big part of every major tender that we have. 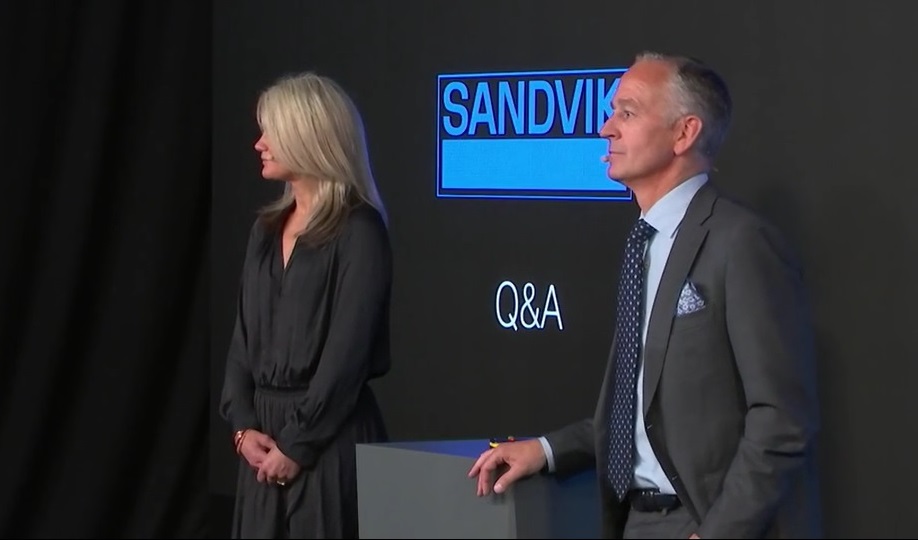 “We have a big labour force out there in mining that has serviced diesel equipment for 100 years … We have to build a lot of new skills.

“So I believe in that 2-4-year timeframe it will really start to impact from a volume point of view.”

“We don’t want a me-too; we want something better than diesel, just like Tesla wants a car that’s better than petrol”

Ager said building BEVs off the Artisan “platform” acquired in 2019 was a “significant advantage” for Sandvik, rather than adapting diesel machine designs. “I’m 100% convinced the best way is to design around an electric machine – that’s how you get a better machine than a diesel machine,” he said.

“We don’t want a me-too; we want something better than diesel, just like Tesla wants a car that’s better than petrol.

“I think we will see a rapid cost decline for battery-electric as we grow the volumes, get repetition and learn, and then also work costs out of the product.”

Sandvik sees a future in which autonomous equipment working underground is supported by drones, doing surveys and scanning.

“Our next generation automation solution will have AI onboard the machine so the equipment can plan its own route,” he said. “It’s [machine routing] now all predetermined.

“We see ourselves shaping the underground mine of the future.”

Also like his counterpart at Caterpillar, Ager said commodity prices that sustained brownfields – and some greenfields – investment at moderate, rather than boom-time, levels was the preferred outlook scenario for Sandvik. An inflationary environment was not helpful to anyone. But neither has Sandvik “built in a commodity crash” in its growth scenario to 2025.

As well as electrification as a driver for mining equipment demand, Ager sees the growing middle class in countries such as India, and general GDP growth, as positive factors.

Asked if increasing environmental restrictions on coal and oil and gas projects could ultimately impact the large and very important gold-mining space, on which many suppliers depend a great deal, “because its CO2 footprint is one of the highest across the mining space, on the one hand, and on the other hand, well, we only use gold for jewellery”, Ager said it wasn’t being factored into strategic planning at this stage.

“I don’t see that happening,” he said.

“I do see the gold companies being very active on their ESG agenda, and driving toward net zero targets [including] buying electric equipment.

“We’ve got four battery electric trucks with Barrick in Nevada and there are lots of other gold miners that are going hard to electrify and reduce that carbon footprint.