Schlam aims to build on strong body of work 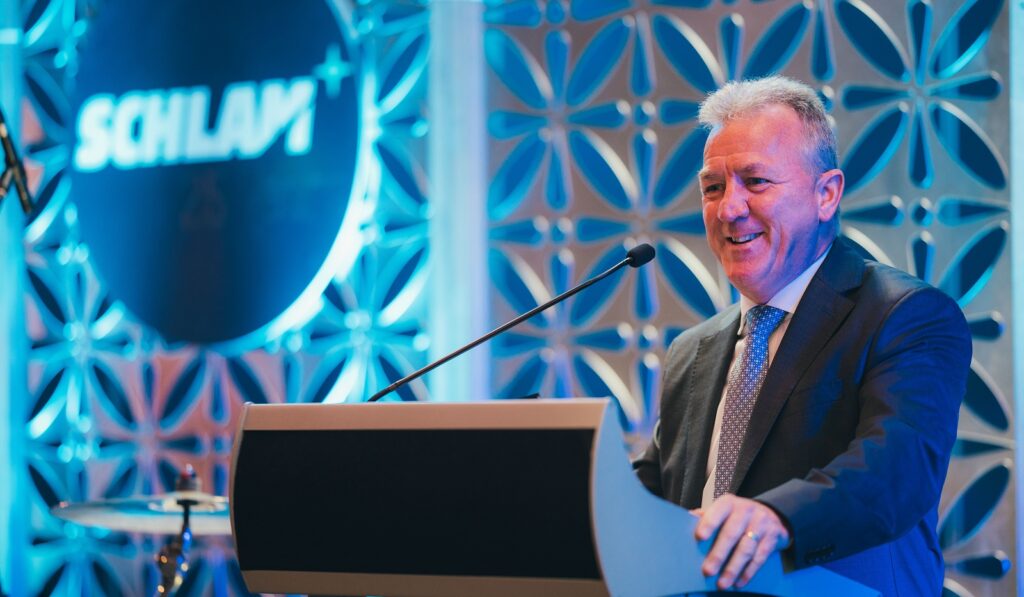 One of the fastest growing companies in the global METS arena in the past five years recently had its biggest win yet with a A$110 million contract to supply dump-truck bodies to BHP mines in Western Australia and Queensland. The deal reinforces Schlam’s leading position in Australia’s $300 million truck-body market and opens up funding options for the company’s four-pronged growth plan.

“Our first priority is to continue to grow and develop the Australian market. We believe we are probably the leader in the Australian market, and we want to consolidate that and make it so bloody difficult that no-one will get near us,” Schlam CEO Matt Thomas told InvestMETS.

“The second part of the plan is international growth, the third is around adjacent products and services and the fourth one is growing our people solutions business.”

Privately-owned Schlam, controlled by managing director Ryan Schlam, was established way back in 1996 but had a “game-changing” moment in 2016 when it acquired the DT HiLoad truck-tray business of ASX-listed Ausdrill for about A$8 million. A second defining point came when Schlam picked up its first big supply deal with BHP in 2018.

The new contract announced in November last year effectively doubles the volume of dump bodies being supplied to BHP. Schlam also has large supply deals with Glencore and another major iron ore producer.

Ausdrill had a handful of orders for the so-called lightweight trays when it sold DT HiLoad amid testing times for many mining equipment, technology and services companies. Now Schlam has orders for hundreds of the Hercules trays – the 14th generation of which is due for release early this year. The company is on track to record 500% revenue growth in the five years since it bought DT HiLoad.

Of course, if there is a template for Schlam and the corporate path it seems likely to be treading over the next year or two, it is ASX-listed Austin Engineering, which announced its own major mine-truck body supply deal with Rio Tinto in the second half of 2021. A decade ago Austin’s annual revenues climbed to nearly A$300 million and its market value was well above that. Now annual revenues total about $200m and it has a current market capitalisation close to $130m.

The company’s long-term playbook offers valuable insights into both the pitfalls and prizes that can come from public-company life and offshore expansion.

Schlam has enhanced its corporate governance and know-how with the arrival of experienced company executive and leader, Thomas, in 2020 and last year’s addition to the board of David Haslett, who led CQMS Razer (now CR Mining) for about nine years before US private equity firm American Industrial Partners bought in. CR Mining grew organically and through M&A in North America, which is where Schlam plans to be sooner rather than later.

Veteran chairman Colin Bell and Ryan Schlam also sit on the company’s board.

Thomas is currently busy trying to fill other senior executive positions, including one focused on international market development.

“The business has grown significantly in five years and has further ambitions to grow,” he said.

“Ryan’s focus is on the technical development and the technical aspects of the business, which he’s very good at. Adding the right corporate governance structures is a key part of enabling him to focus on that.

“Growth is always challenging. We are focused on growing the company in a manageable way – considered, but still ambitious. Ryan is certainly keen to ensure we are taking people on the journey. When I came here what I first realised was that there was a young, highly talented team in place. I think the family business value of caring for one another is part of the DNA of the company and certainly something we want to maintain as we build this corporate vision over the top.”

Tom Smith, a 29-year-old engineering manager who has been with the business for more than eight years, is part of the group overseeing what has been a highly effective R&D program where Schlam has worked closely with Swedish specialty steel maker SSAB to turn cutting-edge truck body designs into arguably the most durable ‘lightweight’ trays for plus-200-tonne-payload mining trucks in the world.

“The [Hercules) product was always seen as a good product,” Smith says. “But the support for the product in the field wasn’t there and that meant customer feedback into the design process wasn’t there either.

“The first thing Ryan did was just focus on closing that feedback loop; get guys in the field supporting the product and feeding information back into the design team. Everyone’s got ideas on how to improve the product but if you’re not listening it’s never going to improve.

“After-sales support has played a big part in the contract wins we’ve had and the growth of the company. It’s also contributed to our edge in product design.

“Development of the new-generation dump bodies was an 18-month project. BHP were hoping to lose 400kg out of the dump bodies; we aimed to take another 400kg out, on average, for future bodies. We ending up taking 4.5 tonnes out – 16% of the body weight for a comparable body – while actually increasing the service life.

“That’s the critical thing. Anyone can take weight out of something and it doesn’t last as long. Our challenge was reducing that weight while keeping the service life the same, or increasing it, and we’ve managed to do that whilst taking 4.5t out.

“We’re at the point where we’re about as light as we’re going to go now, I think.

“The next stage of innovation may not just be about taking weight out of the trays, it’s about – and everyone is talking about this now – it’s the decarbonisation of this product. What can we do, as part of an overall mine strategy, to reduce the carbon footprint? Maybe that means they’re a couple of tonnes heavier but they last longer so you don’t have to buy as much steel, or it might be using different materials that are more environmentally friendly.

“That’s potentially the next one we work on. We’ve had a lot of conversations with customers.”

Schlam is also building its mine loader and excavator bucket production volume – part of its “payload solutions” business centred on dump trays – and has a strategy to grow its labour hire activities as COVID travel restrictions ease. It also continues to build its traditional engineering services.

Thomas said the addition of “adjacent products and services” could be via M&A or an “organic opportunity”.

The North American strategy was still being polished, but “we don’t see ourselves starting up a greenfields site where we manufacture ourselves”.

“We’ll probably be working with a partner over there to do that third party manufacturing, which is what we do on the east coast of Australia,” he said.

The company also plans to introduce automation and robotics into its 8000-square-metre production facility in Perth’s east as it gears up to meet demand for its core payload management products.