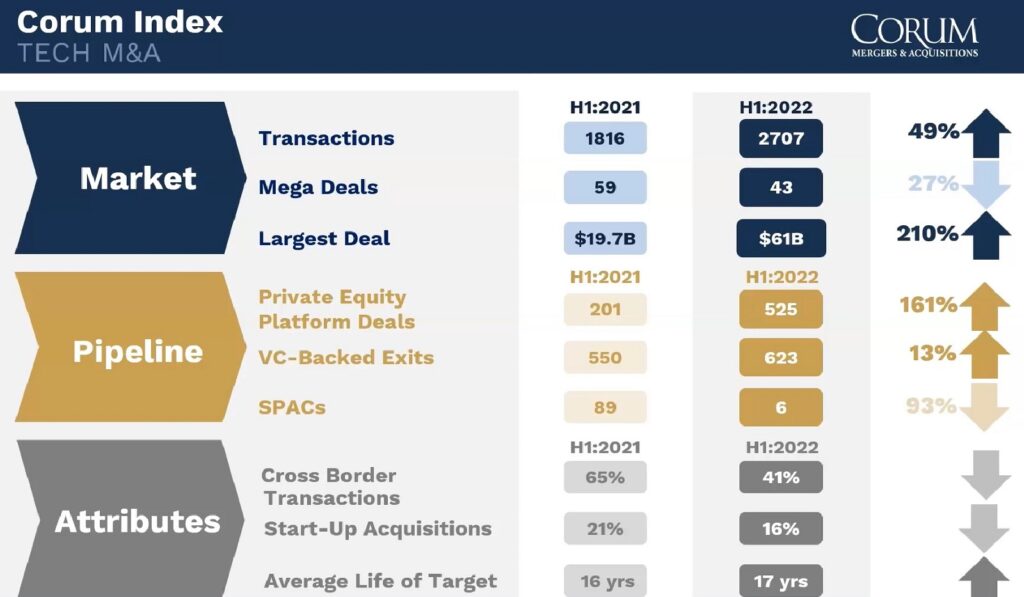 US-based Corum Group says mega technology deals are drying up but M&A transaction volumes have held up well in the first half of 2022 ahead of an uncertain back half of the year. Research out of New York and Sydney meanwhile suggests the start-up funding tide has turned quickly.

On a half-year review call, Seattle-based Corum was eager to strike out media doomsayers “screaming at us about doom and gloom” in financial markets, but conceded key markers of public and private investor sentiment, including some funding activity, were down on last year’s levels.

“While VCs have gotten hammered, cryptos have tanked, IPOs are hurting and grain is not shipping from the Ukraine … [etc, etc],” the Corum webcast heard.

“[But] new highs in [tech] transactions completed were seen in the first half of 2022. More offers are expected in Q3 and Q4.”

Not surprisingly, with public equity markets retracting, special purpose acquisition company (SPAC) transactions plummeted by 93% in the first half of 2022, however, the overall number of tech market transactions was up 49% on the same time last year at more than 2700 deals and private equity “platform deals” surged 161% year-on-year to 525 in the first half of 2022.

As indicated, the mega-deal rate fell (to 43), but Microsoft’s purchase of games developer Activision Blizzard for a whopping $61 billion was 200% bigger than anything seen early last year.

“What people don’t understand is that what is different now to past market adjustments is that we are flooded with cash and tech is still the investment of choice everywhere,” Corum Group president Rob Griggs said on the webinar. 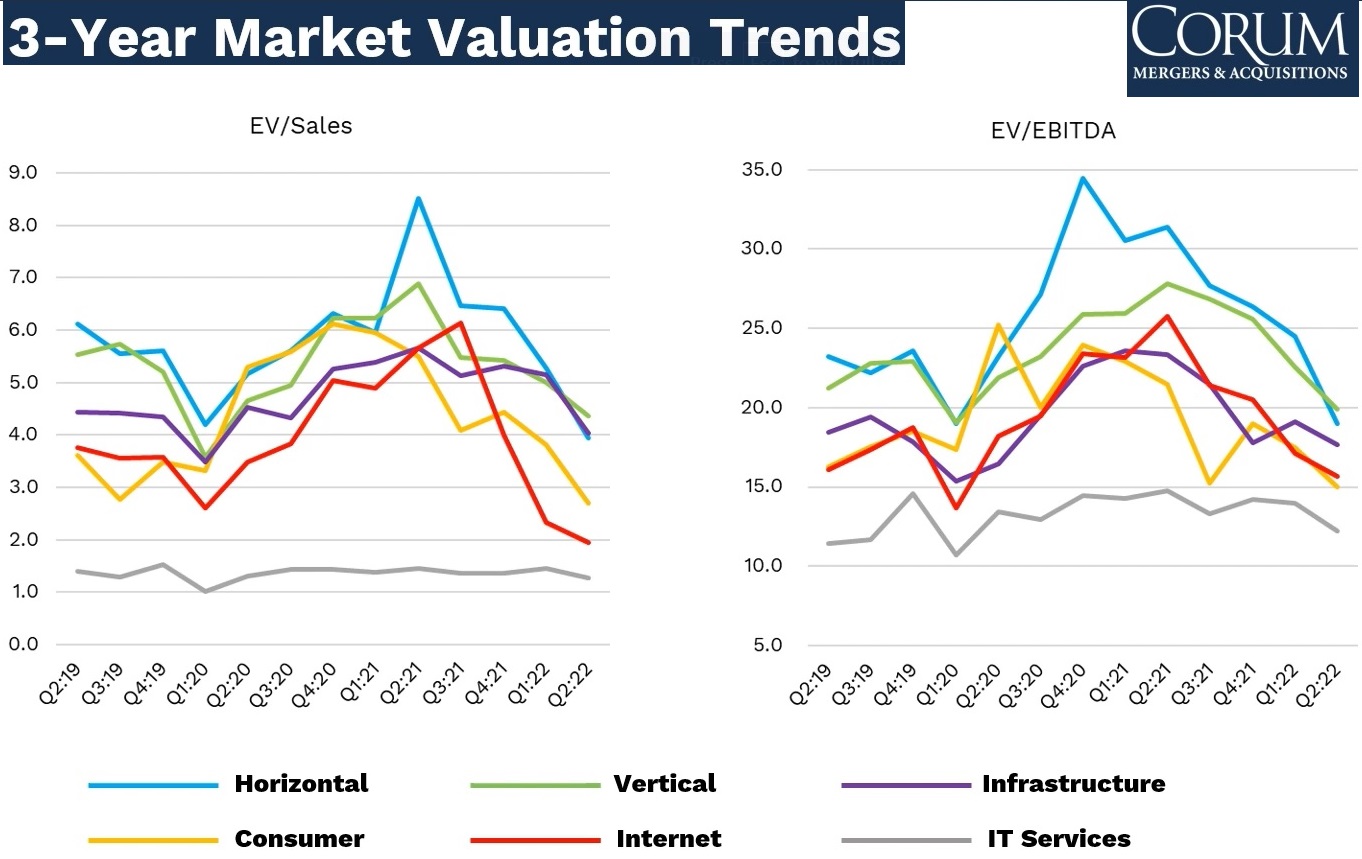 “There’s about $5 trillion targeted for investment and acquisition in tech, most of it by PE firms that have already gotten their funding. They are spending to consolidate markets, acquire bolt-ons, and extend investments into the disruptive trends that we track.

“We’re not seeing a slowdown in the sale of privately-held software and IT companies at all – just the opposite.

“The smart buyers are not playing a waiting game because good companies that were previously on the fence during the 12-year bull run market are now getting serious about calibrating their value and are finally talking to buyers.

“There is now a focus on smaller transactions [under $200m]; bolt-ons or add-ons.

“That’s been the bulk of the deal volume for years and it is continuing unabated.”

Corum said TSX-listed Constellation Software’s 63 deals in the first half of 2022 was the most ever recorded in the first six months of a year. In terms of “strategic acquirers”, Accenture was still number one though it had scaled back its acquisition pace.

Constellation’s acquisition of France’s Geovariances was among mining-tech M&A transactions completed in the first half of 2022. Top of that list was Sandvik’s US$600m-plus acquisition of Australia’s Deswik. 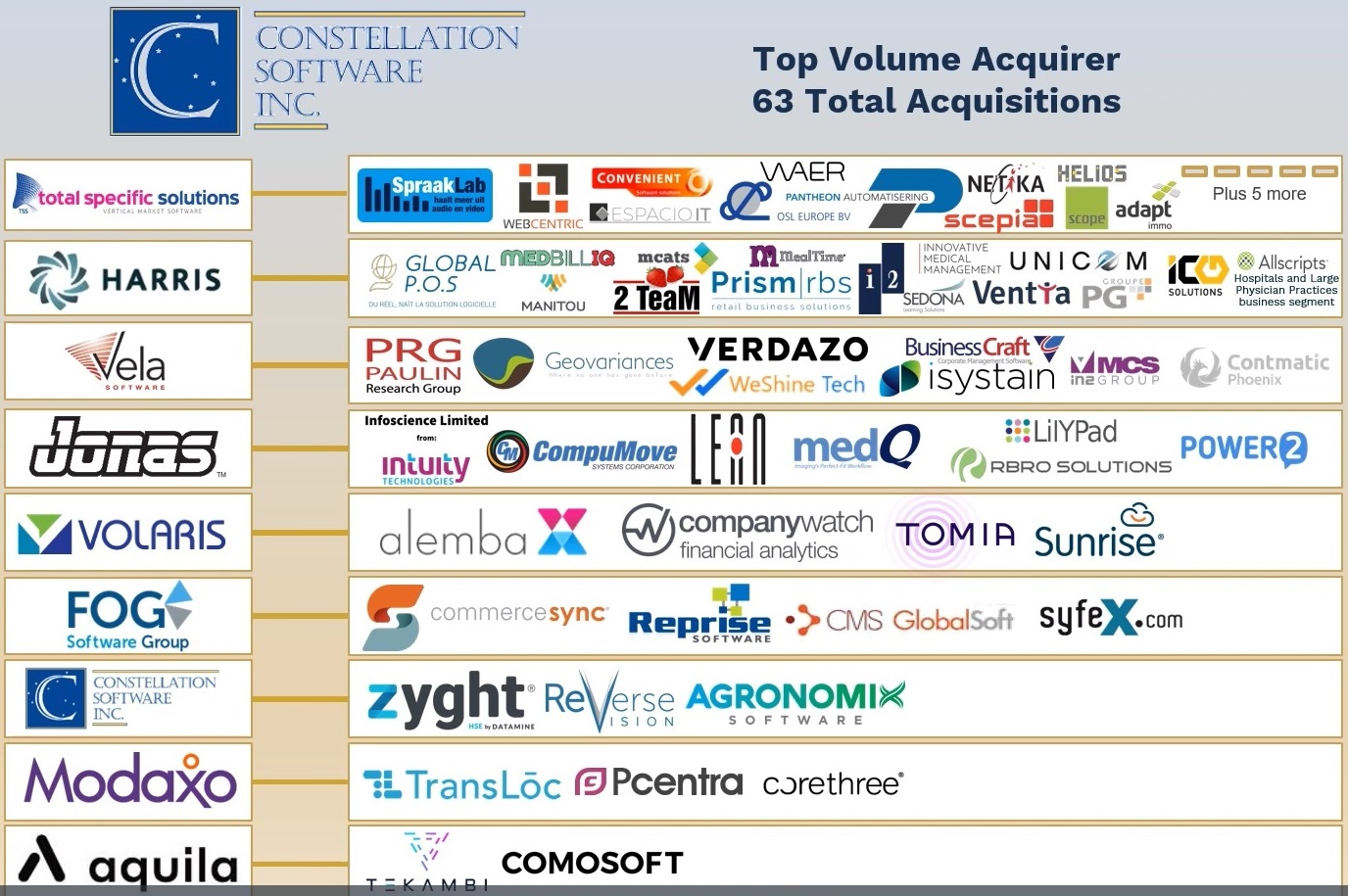 In New York, Work Bench said tech funding came back a peg or two in the first half of 2022 with 90 deals worth $3.2 billion completed.

“While 2021’s record shattering funding activity – $16.7b raised across 237 deals – set a high bar, 1H22 stats still delivered a solid start to the year, especially in comparison to years prior,” it said in its latest report on one of the world’s major tech funding centres.

“Median raise amounts increased across seed, series A, and series B, likely due to more due diligence and conviction in today’s macro environment.”

“At the end of the first half, 2022 is tracking more than $1 billion ahead of where we were this time last year, and well ahead of total capital raised in 2020,” Cut Through said.

“This lead is unlikely to be sustained.

“Lower funding announcements in Q2 reflect the trend seen globally in venture capital, and subdued funding levels are expected in 2H 2022. Round sizes, a proxy for deal valuations, decreased significantly at all investment round stages.

“The gap between median and average deal sizes collapsed in Q2, indicating a dramatic fall in large outlier deals.”