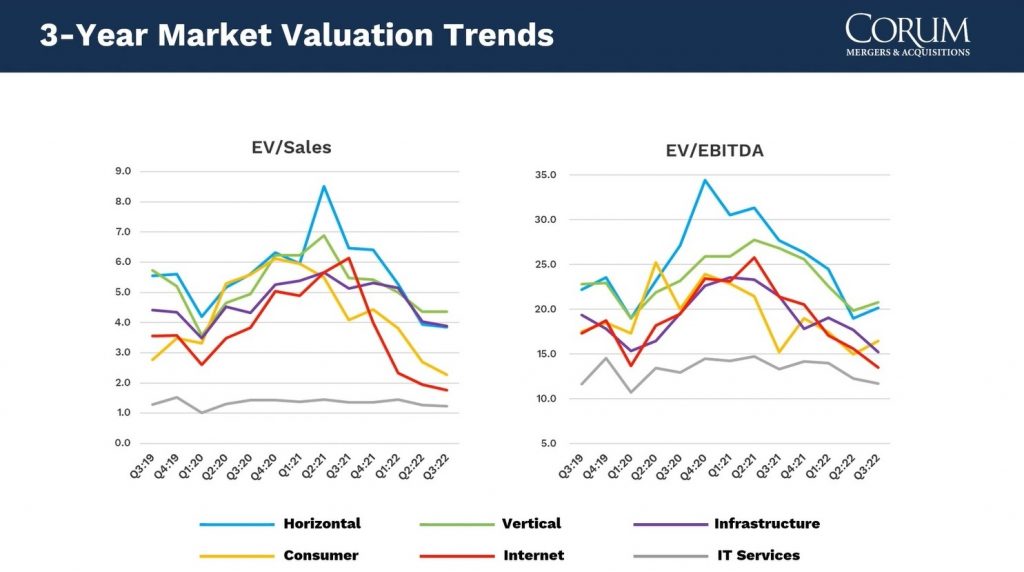 Finance
'Some of our transactions are getting up to eight offers'

US-based Corum Group is maintaining that global technology M&A is on track to hit a record number of closed deals by the end of 2022 despite the market slowdown this year that has seen tech initial public offerings (IPOs) shrivel and investors grow increasingly cautious.

The tech deal broker has said while mega tech deal numbers are down and public-company activity has also dipped, total M&A deal volume was up nearly 50% at the halfway mark of 2022 and the pipeline of private equity and venture capital backed companies was growing.

“Looking forward to 23 and 24, we’re seeing more of the same with many smaller and new technology firms emerging [in the M&A pipeline], including some sellers that sat on the fence during the entire pandemic and realise the IPO window is closed,” Corum CEO Bruce Milne said on its latest quarterly market webcast.

“The bulk of the buyers in PE capital are in the US, a trend that will continue with a strong dollar.

“Some of our transactions are getting up to eight offers. There’s only one winner, but that means that seven buyers are going to be losing out. And you know what? They’re still hungry for acquisitions and that’s helped driving the pace.”

US tech IPOs raised less than $5 billion in the first half of this year versus more than $155 billion over 2021.

Corum vice president of corporate strategies, Timothy Goddard said that was one of six reasons he expected the pace of tech buyer activity to continue to increase.

“First, the American dollar is up 20% over most major currencies in the last two years. Foreign sellers are on sale and in the past this has made American firms get aggressive and go after international assets,” Goddard said.

“Most US buyers can afford to pay more, which means international sellers should look to the US when looking for acquirers and investors.

“Second, we’re still in a generally unsettled period. People are worried that things will get worse. That makes the motivation to sell greater.

“Third, the IPO market has dried up.

“This drives a pivot from IPO to M&A. We just saw that design software unicorn Figma is being acquired by Adobe for $20 billion. Figma was set on going public but 2022 has been a terrible year for tech IPOs. The acquisition by strategic buyer Adobe was a far more lucrative opportunity, double the valuation they received just over a year ago.

“Fourth, inflation drives acquisitions. When the value of cash goes down, buyers don’t want to hold it they want to spend it. Cash is always a driver, but it’s more of a driver right now because buyers need to buy something.

“Fifth, even with that incentive, there is still a record amount of cash on the books looking to buy or invest.”

Goddard said a possible change in the “risk attitude of investors” was a sixth factor.

“Success in this market means looking at risk differently,” he said.

“John Doerr of Kleiner Perkins, arguably one of the savviest investors in the market today, recently sat down to speak with [Carlyle Group co-founder] David Rubenstein about his investment philosophy. He said that Kleiner returns its capital 45% of the time. So a majority of the time they don’t; they fail.

“But one of the bedevilling things about venture capital is you can make many, many, many times your money on a very successful investment and you only lose one times your money. So worst case scenario, you lose what you put in.

“That … attitude is driving more significant investment in the M&A market.

“Out of the 70 deals we just reviewed … you don’t know most of the buyers and there are new buyers coming along every day.

“While I was putting this piece together the other day, I had two buyers we hadn’t heard of reaching out, looking for acquisition opportunities.”