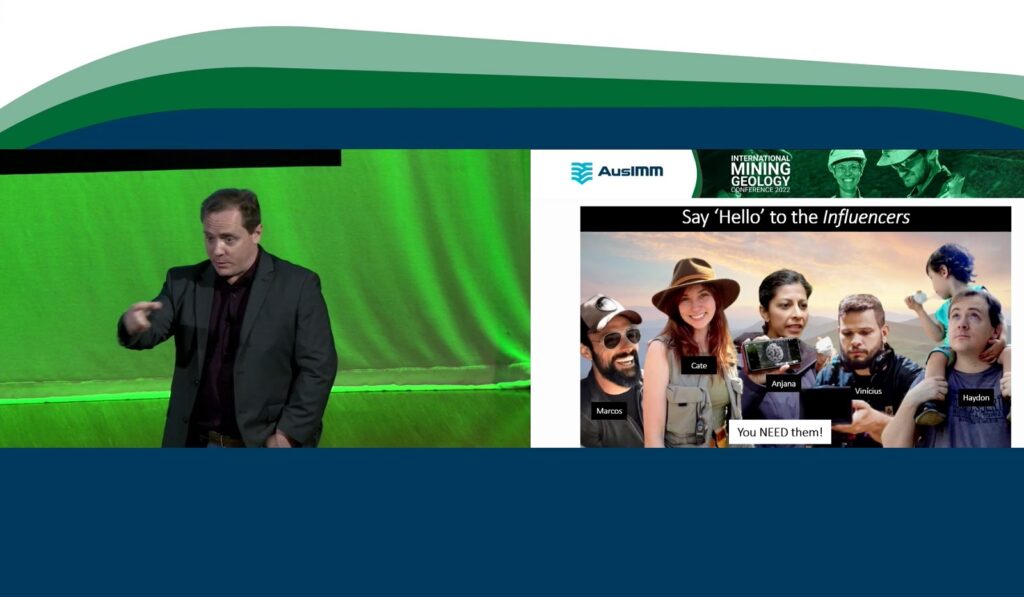 Viewpoint
Top image :
Haydon Mort and some of his 'geo-communicators'
Keynote speaker at the AusIMM 2022 International Mining Geology Conference

Haydon Mort is calling on all free-thinking geoscientists to be the “champions” the mining industry needs to better sell itself to a new generation of professionals and suggested at a large industry gathering in Australia a “critical mass of powerful geo-communicators” could help turn a global tide of negative views about mining that was stemming the flow of high-grade talent into the industry.

“People are either ambivalent about mining, or they are hostile,” the founder and CEO of Geologize told the AusIMM 2022 International Mining Geology Conference, citing various industry and non-mining public surveys and other “converging lines of evidence”.

On Gen Z student views on mining career options, Mort cited a new BDO report that said nearly 490 students in Australia, Canada, Latin America, South Africa and the United Kingdom ranked mining and oil and gas last among 13 industries they’d be keen to pursue careers in. The accounting and advisory firm’s London office has produced a series of reports based on surveys basically saying the same thing about mining’s recruitment and retention problems.

Mort’s point was that public views about mining did not appear to be getting better despite the industry’s attempts to sell its pivotal role at the base of a global energy transition and even its growing reliance on – if not wholesale embrace of – technology to aid its own modernisation.

Simply dismissing the public as ignorant or misinformed about mining’s value would not solve its image problems, Mort said. Were the problems real? Results of surveys such as BDO’s, the closure of university geoscience departments and programs around the world, and myriad industry reports identifying a growing disconnect between mining and the kids who might be tomorrow’s geologists, mining engineers and metallurgists, pointed to persistent failures in communication strategies in the industry, according to Mort.

“We’re still living in the past when it comes to public engagement,” he said.

“When we do evangelise the geosciences we are tending to do it for the sake of [geoscientists]. That will appeal to those who are already curious – the low-hanging fruit. I would suggest that where we are now in the talent crisis, we need to aim higher up the tree. We need to grab a larger slice of the demographic.

“The good news is we can change this … We just need to apply some lateral thinking.”

Geologize has developed and is selling a series of online training courses for individuals and education institutions, some of which have gained institutional endorsement in different parts of the world. It claims to have more than 3000 individual “learners” using its platform. Mort, a geologist by background, found his early efforts to become a social media influencer didn’t pay the bills. Hence, pivoting into the education and training business.

He said while forums such as the hybrid International Mining Geology Conference with its circa-420 live and virtual attendees generated important internal dialogue that helped inspire and ultimately retain younger geo-professionals, external outreach was the key to the industry’s future.

He cited the MinuteEarth YouTube channel as an example of the type of non-partisan information source the mining industry could be emulating.

“Two massive echo chambers for the industry are LinkedIn and Twitter, but engagement levels are low there compared to Instagram and TikTok, for example,” Mort said.

“There are people – geologists – with 250,000 followers on TikTok and Instagram, with outstanding engagement, over 10% engagement, and they’re killing it.

“It is a tool that can be used and abused accordingly [but] this is where our target demographic is. We’re not there. Why not?

“Some [content] that is there isn’t very effective. In fact, some of the current communication is actually harming the industry’s image. It’s usually more for shareholders [than for broader consumption]. I asked a CEO about this and got the response that it’s [Instagram postings] a box that we tick. In the next breath he was complaining about the lack of talent coming through.”

Mort said while the mining industry did need to invest money in communication to help “set the record straight” on its contribution to social and perhaps environmental, and not just economic, wellbeing, it generally had to adopt a different approach to the standard, “you need us, we’re important; you should be grateful” messaging. “That just [translates as] arrogance.”

He said mining needed media champions, or influencers, who had credibility, the eyes and ears of “the next generation”, and social media skills. Mass engagement was helpful.

More or less writing off an audience suggestion to reach out to Justin Bieber, Mort said people who were most passionate about “championing the geosciences” were (younger) industry professionals who were already using the right social media channels to communicate with decent-sized audiences.

He peeled off the names of geologists and others in different parts of the world with large Instagram and TikTok followings who were doing the kind of work corporate money generally couldn’t buy. Some were trying to operate independently in the social-media influencer field while others were part-time.

“They’re young, they appeal to the next generation. They’re doing it because they love their subject. And you cannot buy – none of you, not Rio Tinto or BHP – that kind of authenticity,” Mort said.

“[The industry] needs these people and actually they need you, too. Many people like this drop off social media because it doesn’t pay the bills. That’s a tragedy because along with them go hundreds of thousands of followers who could have potentially wanted to go into the industry, or go to university and study geology.”

While Mort said industry funding of social media influencer types would be beneficial to both parties, he agreed it was difficult to find a proven formula given the value put on credibility, on the influencer side, and the often suffocating restrictions communication and legal types now put on mining companies’ external broadcasts. Employees of companies using social media to express personal views on their profession also invariably have to navigate this mine-field.

“I am not suggesting that they [influencers] incorporate [company] spin,” Mort said.

“Maybe they don’t even need to be affiliated and have the branding of their company.

“If the company wants to support them to do that, that’s one thing, but it seems to me that, as I alluded to, professional geoscientists are the most passionate people to do this so maybe they can go ahead and do their own thing … disassociated on the side, from their company.

“They have a full-time job obviously, so does the mining company give them the flexibility to do that? This is an internal conversation that mining companies have to have.

“But I’m not suggesting they have to be affiliated with [a] company in order to do that outreach. I can say from my own experience [training geo-communicators] that they want to do the outreach, and it should potentially be part of the company’s strategy for outreach.

“If we get a critical mass of independent geologists becoming powerful geo-communicators with the [right] tools … then it could start to shift society’s understanding and opinion of the industry.”