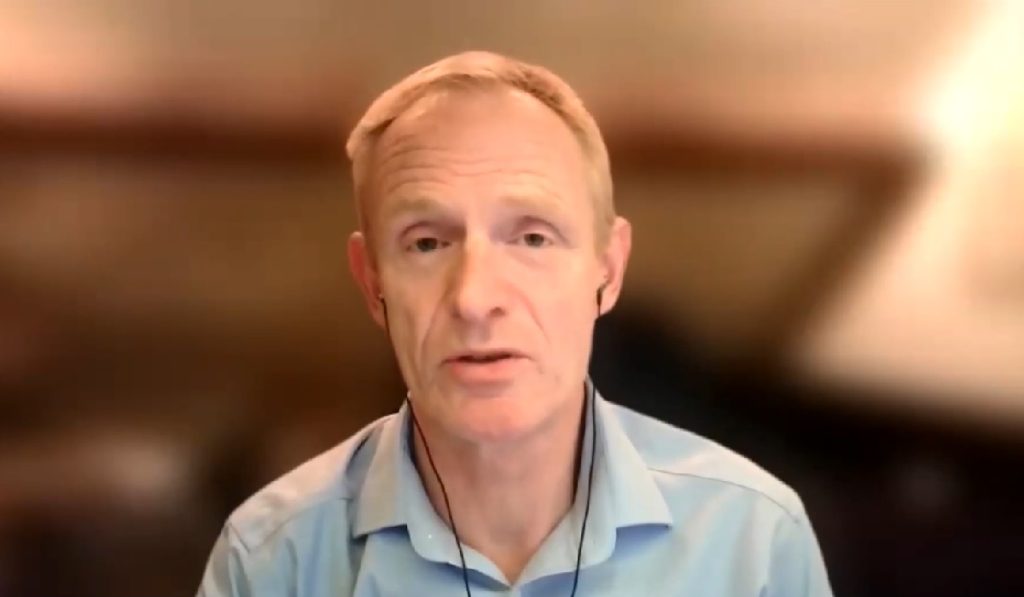 Pipeline, Viewpoint
Top image :
Skarn Associates CEO Mark Fellows
‘Most if not all companies … are currently not sure how they are going to hit targets’

The New York section of America’s Society for Mining, Metallurgy & Exploration (SME-NY) has provided an entrée to its major annual mining finance event in May, with a high-level selection of mining leaders joining panels or presenting individually at SME-NY’s third Thought Leaders in Mining virtual event.

The in-person 8th Current Trends in Mining Finance Conference (CTMF 2023) in New York runs from May 8-11 and includes expert presentations on mine financing and capital markets, mineral and metal markets, regulation and risk, technology trends, and stakeholder engagement.

Mark Fellows, CEO and co-founder of Skarn Associates, and CostMine analyst Brad Terhune spoke on SME-NY’s Thought Leaders webcast about the certainty of mining’s changing environment, social and governance (ESG) future, and the corresponding uncertainty around compliance (and non-compliance) costs.

Skarn and CostMine are both engaged in the somewhat onerous task of mapping mining’s move to higher metal production and material movement rates, and a smaller environmental footprint. Skarn is uniquely and independently tracking the carbon intensity of more than 3000 assets of 600-650 mining and metals companies. Fellows indicated leading mining companies’ 2030 carbon-intensity reduction targets required an unprecedented shift in technology development and adoption speed in the sector.

Terhune said: “ESG initiatives are driving positive industry changes; it’s much needed. However, we should ask ourselves more questions about the reliability of project timelines, the appropriateness of equipment for the tasks outlined, and costs related to failed initiatives.

“It is very difficult to start putting numbers to these components without industry-wide improvement in cost transparency.”

Fellows, who started his career as a geologist and led the metals and mining consulting business at SNL Financial/S&P Global before starting Skarn in 2016, said the large and important copper production sector – often seen as a global mining health barometer – provided some useful signals on the “state of play [in] progress toward net zero” in the industry.

He said available data indicated world copper production could grow by 15% between 2021 and 2025. A 14% forecast rise in electricity consumption in the sector was very similar to the rise in copper output. An estimated 52% of total CO2-equivalent emissions linked to copper production, or about 60 million tonnes CO2-equivalent, came from purchased electricity supply (scope two). Diesel use in mobile mine equipment and downstream freight accounted for 22%.

“So the electricity purchase goes up by 14% as the production rises by 15%,” Fellows said.

“What that’s implying is that we’re not seeing any really substantial increases in energy efficiency in these forecasts. We’re looking for those and we’re factoring them in where we can identify them. But really, energy efficiency is not having much of an impact.

“There’s a big headwind of course because we know the grades are falling, strip ratios are increasing, orebodies generally are becoming more difficult, deeper, all of those things that act as a headwind towards energy efficiency. So maybe a net 1% gain in energy efficiency is actually significant.

“And the reason for that is essentially the adoption of power purchase agreements. So those are agreements that the miners are being offered by the grid power providers for them to tap into certified renewable power, delivered to them via the grid.

“The interesting thing is that those renewable power agreements are – we’re hearing a lot now from clients, and people from power companies themselves – in some cases reaching price parity with traditional fossil-fuel contracts.

“In many cases, the differentiator and the decision that the mining companies are faced with is whether they have the reserve life to sign up for what might be a 15-year power purchase agreement as opposed to a much shorter term fossil-fuel agreement.

“So one of the key differentiators that’s arising in the sector right now is have you got the mine life to confidently sign up for a power purchase agreement without risking a default further down the line?

“And a similar concern applies to the adoption of low-CO2 technology. It could well be that many, many mines will not have the economic margins or the mine life to justify swapping out their diesel haul fleets for whatever the hydrogen, battery-electric, fuel-cell alternative turns out to be. It might just not be economically viable for many operations, particularly the short-life, and marginally economic ones, to do that.”

Fellows said natural gas was the transitional fuel in mining’s switch away from coal and diesel, with “large-scale adoption of renewables only now really beginning to happen”. Commodity sectors dominated by mines connected to regional or national grid networks were dependent on macro changes in energy supply. South Africa’s platinum sector, for example, remained very much tied to the country’s coal-fired power grid, while cobalt production was being driven by the Democratic Republic of Congo’s hydroelectric power.

“There’s some big differentiators there amongst the commodities,” Fellows said.

“From company to company also this stuff makes a huge difference.

“All of the ICMM [International Council on Mining and Metals] members amongst the major mining companies are signed up to a commitment to hit net zero by 2050. But there’s still a lot of uncertainty as to how companies are going to even meet their 2030 targets. 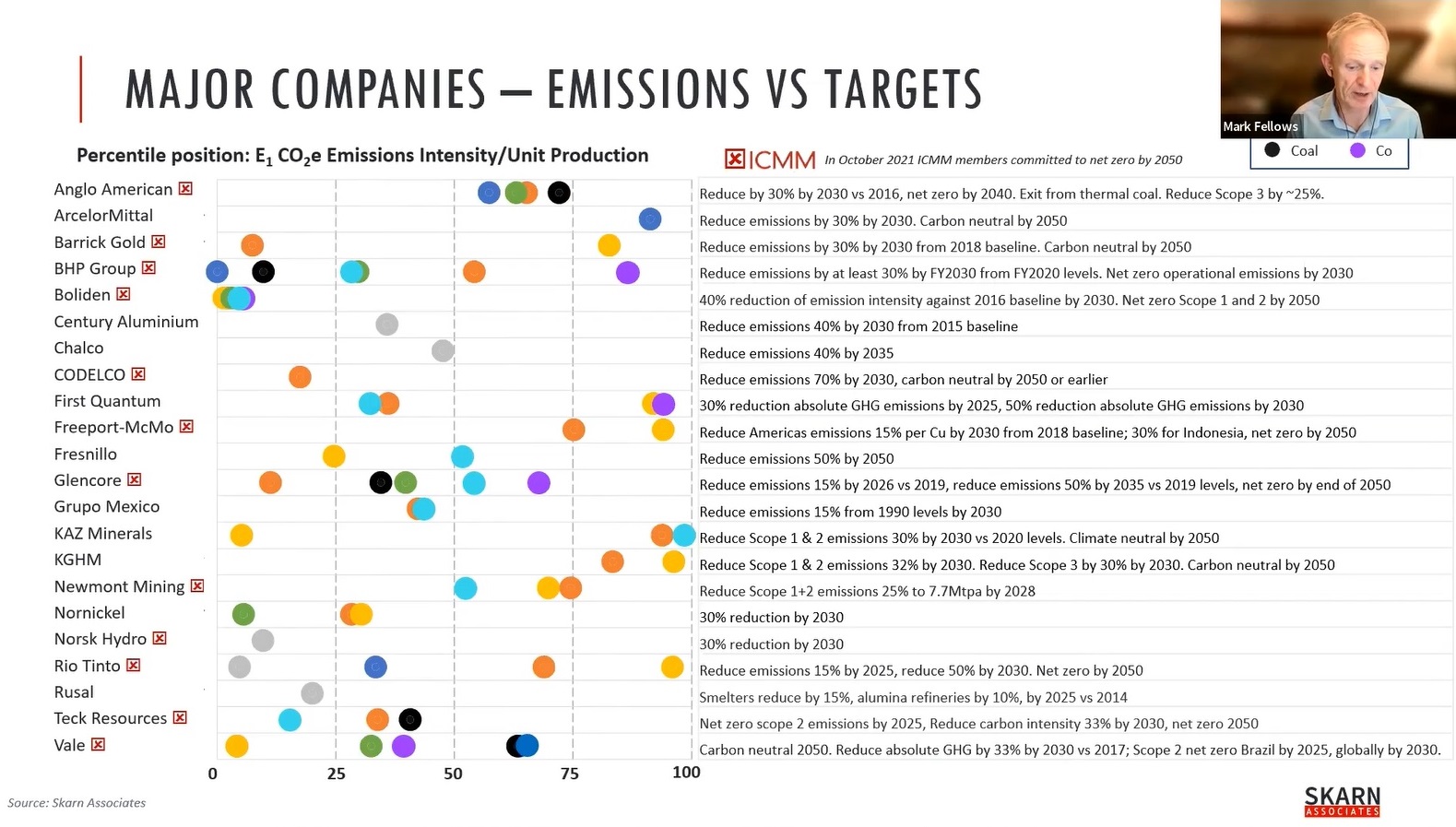 “Some of these targets are not compliant with the science-based approach. In other words, they don’t yet have the methodological components behind them that we really do need to see. And the reality is that many companies – most if not all companies – are currently not sure how they are going to hit the targets in terms of what technology are they going to implement and how much is that going to cost.

“Those things are still currently very much moving targets.”

However, Fellows remains optimistic about future targets being met.

“In terms of where this is all heading, I would encourage you to think about the S-curve model of technology adoption,” he said.

“Right now, we’re in a transition phase for renewables … and that’s a very steep point on the curve.

“Tipping points typically happen when the new technologies’ market share reaches 5-to-10% … [and] we’re going to be getting there pretty quickly. In terms of new energy infrastructure sales, we are already there in terms of the implementation of renewables as a new component of the energy mix.

“What happens … under the S-curve model is you get powerful feedback loops once the rising volumes and falling costs of the new technology hit a certain point.

“My argument is that although it may look as if we are not yet close to the transition point and fossil fuel production is still very high and rumbling across the top of a peak, that when that peak starts to actually give way it will probably do that pretty quickly.

“We’re already at a point where solar and wind is accounting for 78% of the new energy installations globally. By 2030 that’s projected to reach 95%. And I think when we get to that point what we’re going to see is that that peak in fossil fuel demand starts to really kick in.

“These are projections from the IEA [International Energy Agency], historically a very conservative forecaster of the decline in fossil fuels. For them, this is a big step-change [from] their forecast in June 2021.

“My point is that you should expect some really rapid progress in decarbonisation in our sector over the next 10 years, although as of yet, it’s still really early and quite difficult to see tangible proof of that happening in a major way.

“But that will come and it will probably come a lot more rapidly than you might expect.”