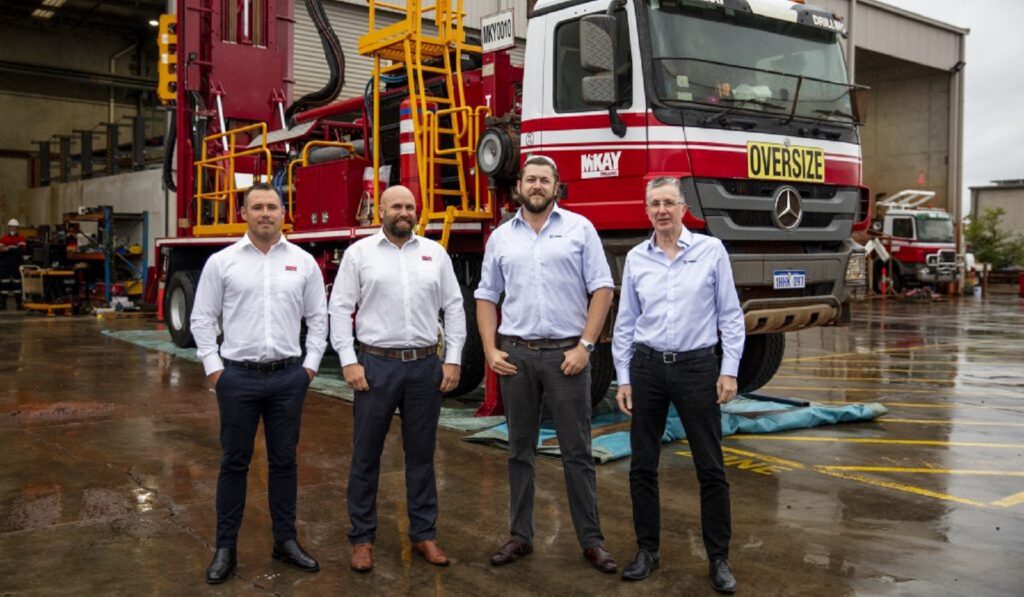 Start-up Tribe Tech Group is ready to put 50,000 engineering hours and high-calibre technical and corporate teams to work in its pursuit of “major original equipment manufacturer” status after securing funding to help ramp up production of automation-ready exploration drill rigs in Northern Ireland.

The company, formed in 2019, is also advancing trials of an automated mineral sampling product it expects to manufacture in Perth, Western Australia, where founder and managing director, Charlie King is based.

“How far we can go and how much we can grow depends on our product range and client list, of course, but we really want to go out there and grab a big share of this market.

“We believe we’ve got the largest engineering team in the industry in Perth – all industry specialists handpicked for the things they’ve achieved, and the problems they’ve solved – and that team has come together to produce an RC drill rig that is much safer and much more productive than a conventional manned rig.

“Our tagline as a company is, automating the toughest tasks, and that’s what we’re about. If there is a big enough problem, we want to be involved in solving it, and maybe in the future that’s not even drilling or mining related. It could be forestry, space exploration, who knows … We’re getting lots of approaches from people who want access to our team and our technical capabilities.”

Tribe has picked up several million dollars of new government grants and equity funding to support plans to employ about 80 people at its Belfast plant and start commercial delivery of drill rigs this year.

McKay Drilling, where Northern Ireland native King started his career as an offsider in Australia, has ordered a number of units. New McKay owner Major Drilling Corp is one of the world’s biggest mineral drilling contractors. King says Tribe has a robust order book and pipeline.

“It will probably take a couple of years to ramp up to full capacity,” he said. “But with the demand we’re seeing on the client side we’re evaluating accelerating that at the moment. We’ve got to keep it manageable as well. In our business plan it’s 2-3 years, but we’re evaluating bringing that forward to meet market demand.”

Miners in Western Australia and elsewhere have introduced and built sizeable autonomous production drill fleets over the past decade. Automated surface exploration drilling has been a tougher nut to crack, but Tribe sees itself as a market disruptor.

“Our aim is to get exploration and RC drilling to follow that same path as drill and blast has done,” King said.

“Exploration is a lot more complicated. There is a huge number of variables. In essence the existing rig designs haven’t changed much in 30 years and there is a reason nobody’s tackled the problem … It’s a huge problem. Our company has put about 50,000 engineering hours into getting where we are – a huge commitment and years and years of work – and you’ve really got to understand the machinery and the problems, and make it reliable enough that it can take the punishment that somewhere like the Pilbara is going to throw at it.”

A sizeable Australian Government grant is also helping Tribe to progress field trials of its autonomous mineral sampling system in the current quarter. It wants to export the technology globally from Perth.

“We’ve got a huge amount of interest from tier-one mining companies in our technology, and endorsing it and supporting it, and the same with the labs. So, very exciting times for us,” King said.

“If all goes to plan with our next load of field trials we’ll be putting it into advanced testing and commercialisation shortly after.”

Receptive capital markets and a thirst for discoveries of “future-facing” mineral deposits have added to renewed global exploration investment momentum in the gold and copper sectors, generating a fairly positive view of the mineral search space in the next few years.

The perennial problem of people shortages in that space is no closer to being solved – without advances in technology.

Tribe’s early fund-raising endeavours have been typically tough for a start-up, but commercial output and revenues – not to mention its climbing valuation – should change that.

That is a group with plenty of company-building experience.